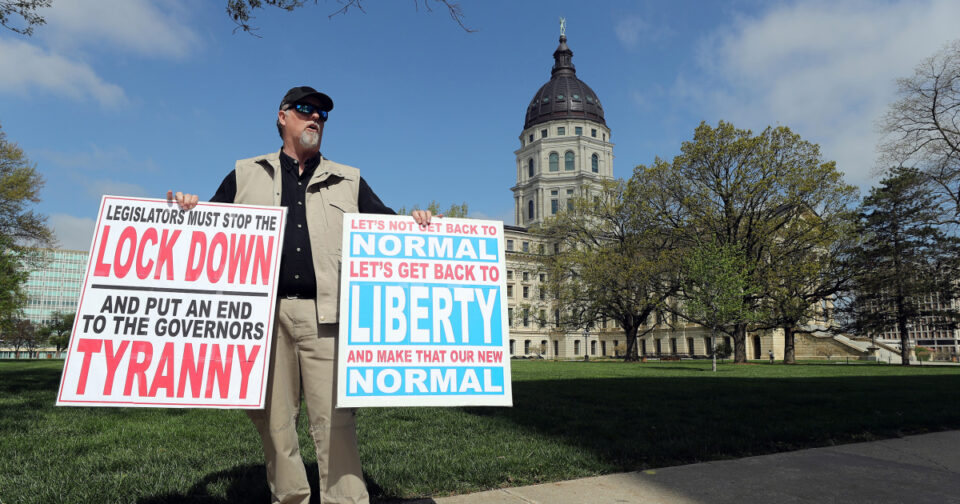 Lee Norman, Kansas’ top health official, was blunt in his public assessments of the coronavirus pandemic.

He delivered daily briefings with stark warnings about Covid-19 that often put him at odds with the state’s GOP-controlled legislature, which recently stripped Democratic Gov. Laura Kelly of her ability to impose statewide restrictions.

But last month, when legislators were poised to weaken Kelly’s emergency powers, Norman stepped down as head of the Department of Health and Environment. He later told the Kansas News Service that the governor, who appointed him to lead the agency, had asked him to resign.

Like Norman, hundreds of state and local health officials across the country have retired, resigned or been forced out amid partisan rancor over the pandemic, experts say.

“I think I wasn’t furthering their cause, but I was furthering the public health cause,” he said in a phone interview, referring to both state Republicans and Kelly. “I may have been a sacrificial lamb, but I don’t have any way to know that for sure.”

Kelly’s office did not respond to a request for comment.

Lori Tremmel Freeman, CEO of the National Association of County and City Health Officials, told NBC News that more than 500 public health officials have been pushed out or left their jobs since the early days of the pandemic.

“For us to see this level of turnover is just really tough — tough for the community and tough for our response,” Freeman said. “We don’t have a lot of people in line to take the positions because they’re difficult. And, of course, the more we talk about how they’re a target, with threats and intimidation and other things, the less appealing those positions sound.”

Beyond partisan attacks, some officials said safety concerns lead to their resignation.

In Missouri, the director of the Franklin County Health Department stepped down this week, citing threats directed at her and her family.

“The daily verbal assaults, threats of violence and even death threats directed at the department, my family and at me personally for following orders I was directed follow, are not only unbearable, they are unacceptable,” Angie Hitson wrote in her resignation letter. “Resigning was not an easy decision for me, rather it was one I felt I had to make for my own safety and well-being.”

Nichole Quick, the chief health officer in Orange County, California, resigned in June 2020 after protesters displayed an edited photo of her with a Hitler mustache and swastikas. Another critic read aloud the official’s home address at a public meeting. Quick had been behind the county’s first mask mandate, issued weeks earlier.

Other officials, in states like Montana, New York, Oklahoma and Texas, have said they left their jobs due to persistent threats and a lack of support from lawmakers or other government leaders.

In a nationwide survey of about 26,000 people working in public health at the state, tribal and local levels, the Centers for Disease Control and Prevention found that roughly 12 percent of respondents said they had received job-related threats since the beginning of the pandemic; nearly 25 percent said they had felt bullied, threatened or harassed because of their work.

On top of that, more than 13,000 workers told the CDC they had experienced at least one severe mental health condition, such as depression, anxiety, suicidal thoughts and post-traumatic stress disorder.

The exodus of public health officials is raising concerns with experts like Freeman about the country’s ability to respond to the highly transmissible omicron variant, which is putting further strain on the nation’s health system.

“Our public health workforce has lost over 20 percent of its workers in the last decade due to disinvestment, so these losses are coming on top of losses to the field,” Freeman said. “And as we head into omicron and we’re hearing more and more about the seriousness of transmission, we worry about the capacity of our local health departments to continue to respond.”

Still, some advocates say the pandemic has presented an opportunity for officials to reconnect with their communities and teach people about their role.

“We need to make sure people understand what we do and how we protect them,” said Georges Benjamin, the executive director of the American Public Health Association, in a phone interview.

At the same time, he said, “Anyone who thinks we’re suddenly gonna wake up two months from now and things are gonna be the way they were two years ago is fooling themselves.”

For some public health officials, the backlash to their Covid recommendations can be confounding.

Lisa Macon, a local health director for Granville and Vance counties in North Carolina, said that even though “we are used to having good dialogue across political lines most of the time” in a state with a Democratic governor and Republican legislature, “it’s still really challenging.”

“It’s hard to understand how people are against the things that are intended to make people safe and save lives and keep people out of the hospital and prevent disease and death,” said Macon, who is also president of the National Association of County and City Health Officials. “I just struggle to understand it other than we know we’re having political and cultural wars right now.”

How climate change primed Colorado for a rare December wildfire

This bus won’t get you out of Hong Kong, but it might get you to sleep

A brief history of writing for games