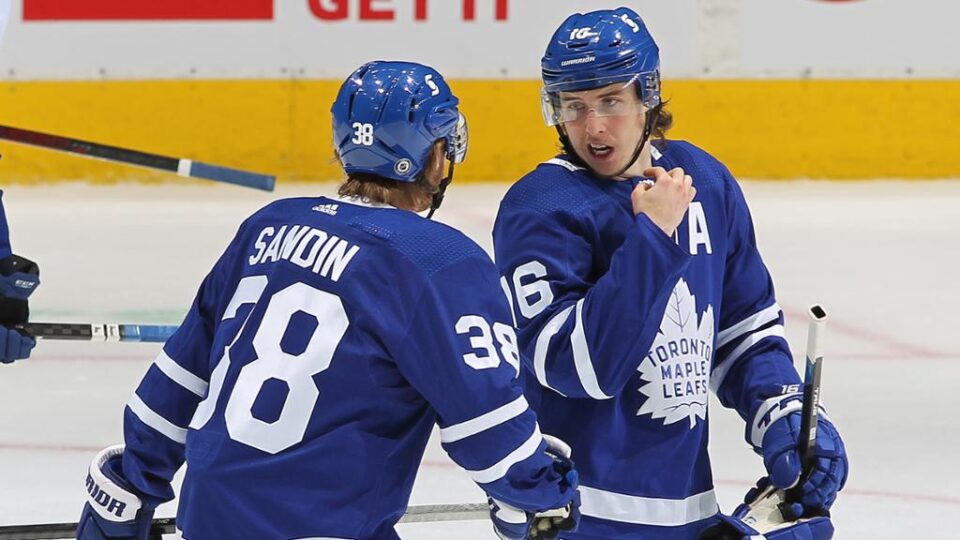 Welcome to the NHL Buzz. Throughout the 2021-22 season, NHL.com will have you covered with the latest news.

Toronto Maple LeafsMitchell Marner and Rasmus Sandin each returned from injury when the Maple Leafs hosted the Ottawa Senators.

Marner, a forward who has scored 21 points (six goals, 15 assists) in 24 games, missed six games with a shoulder injury sustained in a collision with defenseman Jake Muzzin in practice Dec. 3.

Sandin, a defenseman who has eight assists in 25 games, missed four games with a knee injury sustained in a collision with defenseman Neal Pionk in a 6-3 loss to the Winnipeg Jets on Dec. 5.

Forward William Nylander and defenseman Morgan Rielly each played after they were removed from NHL COVID-19 protocol Friday.

Muzzin, who was removed from protocol Friday, did not play. — Dave McCarthy

Montreal CanadiensBrendan Gallagher did not play when the Candiens lost 5-2 to the Florida Panthers on Saturday.

The forward was out with a lower-body injury he sustained in a 4-0 loss to the Carolina Hurricanes on Thursday.

The Canadiens dressed 11 forwards and five defensemen against the Panthers after forward Jake Evans and defenseman Alexander Romanov were placed in NHL COVID-19 protocol Saturday. Forward Cedric Paquette left the game in the first period with an unspecified injury.

Chicago BlackhawksJujhar Khaira returned to the Blackhawks lineup in their 6-1 loss to the Nashville Predators on Saturday after missing five games when he was in concussion protocol.

The forward had not played since he was taken off the ice on a stretcher following a hit by New York Rangers defenseman Jacob Trouba in a 6-2 loss on Dec. 7l.

“Even when [Khaira] first practiced, came back on the ice and guys saw him, you could see the guys light up,” Blackhawks coach Derek King said Friday. “I’m looking forward to having him back, I know the team is. He can’t go out there and I call it, ‘Forrest Gump’ game. If you watch the movie, he did so much in how long, 2 ½ hours? I don’t need [Khaira] going out there, trying to be the hero and solve our problems in three periods. He has to play his game and manage it.”

Buffalo SabresDon Granato returned to coach the Buffalo Sabres in their 4-3 overtime loss to the Boston Bruins on Saturday.

Granato was placed in NHL COVID-19 protocol Dec. 26 and missed two games. The Sabres were 0-1-1 under assistant Matt Ellis, who coached the team in Granato’s absence.

“Really good, actually,” Granato said of how he feels. “The symptoms I had the morning and day after I took the last vaccine was much more severe than what I experienced through this. Basically, I didn’t feel much. I was maybe a little lethargic maybe for a day and ready to go. So I’m pretty excited to be back and extremely excited and grateful. I feel very, very sure the vaccination did its work for me. So I’m very grateful for that.”

Granato, who is a cancer survivor and in October 2019 was hospitalized with severe pneumonia, admitted he was “very concerned” upon getting the news of the positive test.

“I think going through it at times, I guess your faith that kicks in that whatever you’re going to deal with you’re going to deal with, you’re going to get through it,” he said. Fortunately, like I said, everything was so mild for me I’m very grateful for that. Having experienced some things that I don’t want to experience, I was very grateful, you hear the word ‘COVID,’ you see a positive test, your mind can go places that you don’t want it to. I did my best to not let it go there and I felt good all the way through.” — Heather Engel

Colorado AvalancheGabriel Landeskog and Bowen Byram will return to the Avalanche lineup against the Anaheim Ducks on Sunday.

Landeskog, a forward, practiced six days this week, after missing three games because of a lower-body injury sustained in a 7-3 win against the Detroit Red Wings on Dec. 10.

Byram, a defenseman, practiced the past three days after missing eight games because of a head injury sustained in an 8-3 loss against the Toronto Maple Leafs on Dec. 1.

“I feel good,” Byram said Saturday. “I’m ready to play. It’s kind of a day-by-day thing at times, but I feel like I’ve continued to progress and I’m ready to go.”

The Avalanche haven’t played since a 5-2 loss against the Nashville Predators on Dec. 16. Their past seven games were postponed because of COVID-19 protocols.

“I feel good from a preparation standpoint and from a physical standpoint,” Bednar said. “The guys are refreshed, they have lots of energy, and we’re excited to get back at it.”  — Rick Sadowski

The center previously missed three games in protocol from Oct. 23-28. Carter is fifth on the Penguins with 17 points (nine goals, eight assists) in 27 games.

Carter’s absence leaves Pittsburgh without three centers for its next scheduled game against the San Jose Sharks on Sunday.

Evgeni Malkin, the second-line center when healthy, is nearing a return from knee surgery June 4, but will not play. Teddy Blueger, who had been third line center, is also in COVID protocol.

Evan Rodrigues was placed in protocol Monday and was removed Friday. He has been first-line left wing in place of Jake Guentzel (upper body), who could return with first-line right wing Bryan Rust (lower body) against San Jose.

The Penguins are also without second-line left wing Jason Zucker, who is week to week with a lower-body injury. — Wes Crosby