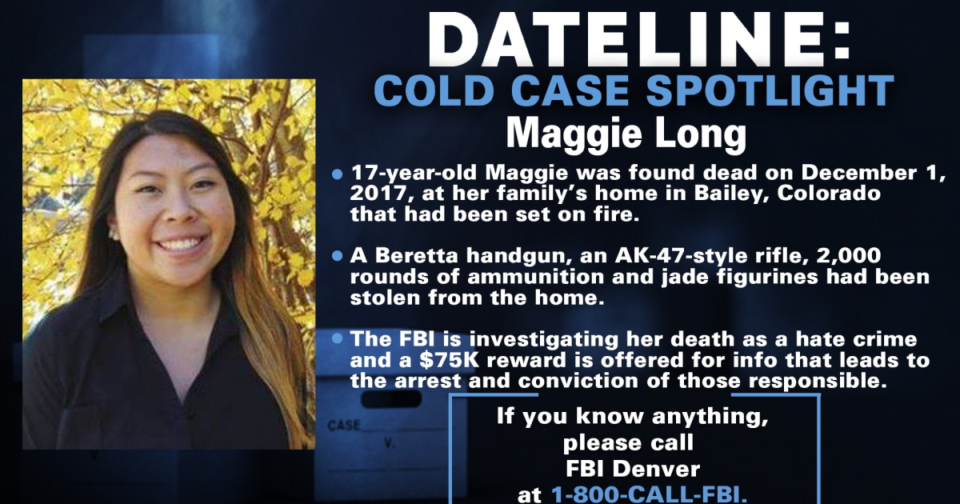 Every December for the past four years, Maggie Long’s family and friends have gathered on her birthday to remember her ambitious spirit, her positive attitude and her contagious laugh.

“When we’re with her friends, and we’re all together, we feel Maggie’s vibe, and it’s like we’re with Maggie,” Maggie’s sister Connie told Dateline. “We want to make sure she’s never forgotten.”

On December 1, 2017, just weeks before the holidays, Maggie had plans to go Christmas shopping with her sisters and help with the annual concert at school. But Maggie’s life was tragically cut short when she was set on fire and burned alive inside her family’s mountain community home in Bailey, Colorado.

“Every day is hard,” Connie said. “But this time of year is especially tough.”

Earlier this year, three and a half years after Maggie was killed, the FBI announced that it is investigating the Asian American teenager’s killing as a hate crime.

“The FBI is investigating the murder of Maggie Long as a Hate Crime Matter, the FBI released in a statement. “A Hate Crime is a criminal offense against a person or property motivated in whole or in part by the individual’s bias against a race, religion, disability, ethnicity/national origin, sexual orientation, gender or gender identity.”

Park County Sheriff Tom McGraw told NBC affiliate 9news back in May that the reclassification will allow more resources to be put on Maggie’s case. He added that he was not aware of specific evidence leading to the change in the investigation.

It’s an angle Connie said was surprising because her family had not noticed any overt Asian discrimination when they lived in the community.

Their parents were born in a Chinese community in North Vietnam and fled to the United States during the Vietnam War, Connie told Dateline. They owned several area restaurants and were well-known in the community.

“It isn’t something we had thought about in the past,” Connie said. “But knowing how awful the crime was, and knowing the details of the crime scene, it makes sense that this was caused by hatred, by someone who thought of us as less than human.”

That night, Maggie was supposed to be working the VIP lounge for a holiday concert at Platte Canyon High School, where she was a senior. Described as an overachiever by her sister, Maggie, who was set to graduate in the spring, was involved in many extracurricular activities at school and was always the first to volunteer.

“She was a very involved student,” Connie said. “She had so many interests and just loved trying new things and being part of as much of life as she could.”

On the night of December 1, 2017, Connie, who is six years older than Maggie and already out on her own, left work and headed for the school concert. But when she arrived, Maggie’s friends asked for her, explaining she hadn’t shown up to work the VIP lounge.

“Right away I had a gut feeling,” Connie said. “Something wasn’t right. Maggie is very responsible and would’ve never flaked on something like this.”

Connie said she called Maggie’s cell phone, but only got her voicemail. Something told her to drive over to the family’s home.

“I drove over to the house and when I got closer, my gut feeling just got worse,” Connie said. “I drove up as close as I could and that’s when I saw the chaos. The fire trucks. Our house had burned.”

And in the driveway was Maggie’s car. Connie said right then she knew something horrible had happened.

According to a press release issued by the Park County Sheriff’s Office, deputies responded to a house fire at the Longs’ home around 7 p.m. after a 911 caller reported individuals causing a disturbance which led to the fire.

Connie sprung into action, calling her family and friends, posting to social media to spread the word that her sister was missing, pleading and hoping someone knew where she was.

But hours later, the sheriff’s office delivered heartbreaking news to the family. Once the fire was extinguished, fire personnel discovered human remains among the ashes of the burned house. It was Maggie.

According to a statement made in January 2019 by the Park County Sheriff’s Office, Colorado Bureau of Investigation, FBI, and Bureau of Alcohol, Tobacco, Firearms and Explosives, it’s believed Maggie walked in on a burglary at her family’s home as it was happening.

Her family says they believe Maggie had gone home to change clothes and gather snacks she had prepared for the VIP lounge at the school concert that night.

According to the FBI, investigative efforts at the scene revealed a physical altercation took place between Maggie and her assailants before the fire started. The suspects stole a Beretta handgun, an AK-47-style rifle, 2,000 rounds of ammunition, a green safe, and jade figurines.

The El Paso County Coroner’s Office ruled Maggie’s death a homicide, and authorities later released composite sketches of three men they believed were involved in her death. It’s believed they were driving a late 1990s to 2000 light-colored Chevy Astro van and a Ford pickup. No arrests have been made and no suspects have been named.

“She absolutely did not know them,” Connie told Dateline. “There’s no way that anyone who knew my sister would do something so horrific to her. She was in the wrong place at the wrong time.”

The FBI along with the family are offering a reward that was recently increased to $75,000 for information leading to the arrest and conviction of the person or persons responsible.

Connie said her family hopes the reward money will entice someone with information to come forward. In the meantime, the family has moved from Bailey to Denver, where they treasure their time together, especially around the holidays.

As they continue their fight for justice, Connie says most of all, they want to make sure Maggie is never forgotten.

“I don’t think that’ll ever happen,” Connie said. “The legacy she’s left behind is pretty amazing. She left a lasting impact on people.”

At the Venue Theatre in Conifer, Colorado, where Maggie performed, she is honored with a scholarship fund and seat plaque bearing her name.

“It’s a seat she would always sit in,” Connie explained. “She loved being in the theater. And you can see how her legacy lives on here, in the place she loved.”

Four years have passed since Maggie’s death and Connie says she often wonders what her little sister would have been like now – what she would have become.

“When we get together with her friends for her birthday, I love seeing how they’ve changed and what their lives are like now,” Connie said. “So many paths she could’ve gone… but hers was cut short,” she said. “It’s not fair and I don’t think we’ll ever understand why. But we can’t let her be forgotten.”

Anyone with information about Maggie’s case is asked to call the Maggie Long Task Force at (303) 239-4243, FBI Denver at 1-800-CALL-FBI or submit tips online at fbi.gov/tips.

Drew Peterson to ask judge to toss out murder conviction