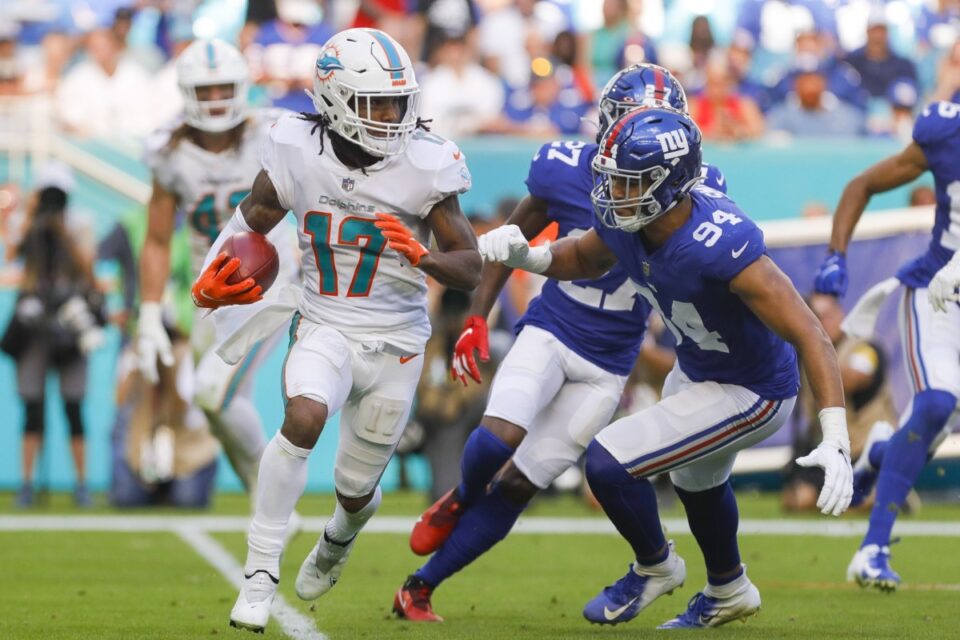 If these Dolphins were the Expos – at their highest aspiration, could these 2021 Fins be the young “bad ball” hitters who deliver runs, like Vlad?

Hey Dug, not sure I get the analogy, but any Expos reference is fine with me (if you know me, you know I LOVE my Expos!). Vlad Guerrero was a stupidly talented baseball player (his son ain’t bad, either), so I’m not sure that correlates to the Dolphins because while I do think the Dolphins have talent, I think their scheme is a big part of their success.

Alain!! Can you in any way tell me how Davis is still the right tackle?? This has to be the most irresponsible coaching by an O-line coach I’ve seen…ever.

Hey A-Rod, I understand the question because Jesse Davis, who has been reliable the past few years, has had a rough season. But here’s the thing: Do we honestly believe the Dolphins would stick with Davis for whatever reason if they felt there was a better alternative available? Personally, I don’t. And what’s the option? Moving Robert Hunt back to right tackle and putting Solomon Kindley or Robert Jones at right guard? Again, I have to believe that if the Dolphins felt that would make them better, they would do it.

Hi Alain , taking into consideration the Patriots domination of the Titans, and the similar style of defense that the Dolphins play, do you think the Dolphins can dominate the Titans as well?

Hey Jason, couple of things: First, the Dolphins’ style of defense isn’t quite the same as New England because the Patriots don’t blitz nearly as much. Second, not exactly  sure I’d use the word “domination” considering Tennessee rushed for 270 yards and two guys had over 100 — and neither was Derrick Henry. The Patriots pulled away in the second half after leading 16-13 at halftime because Tennessee just kept turning the ball over. Also understand that the Titans didn’t have A.J. Brown in that game. So, sure, maybe the Dolphins can dominate the Tennessee offense, but I wouldn’t use the New England game as a point of reference.

What would Tua look like with a Derrick Henry or Najee Harris in the backfield?

Hey DW, I’m going to say he would look exactly like he looks now except with a better option for the running game. A great running game obviously would help the offense, but it wouldn’t suddenly make Tua a dangerous downfield passer, if that’s what you were looking for me to say.

Hey Hans, my guess is one or two. I do believe Hunt and Eichenberg definitely will be in the lineup in 2022, maybe Austin Jackson gets another shot and I could see perhaps Michael Deiter again starting at center. Obviously everything will depend on who becomes available (teams don’t tend to let quality free agent O-linemen leave) and I’m also not so sure the Dolphins will be quick to simply discard all their young players up front.

I really liked the new package of plays with Waddle in the backfield – do you think that was only for the last game or something they can expand upon in the next few weeks?

Hey Mark, I absolutely think there’s always more things the Dolphins can and will be coming up with to free up Waddle, who already does a good job of that on his own.

Bonne année Alain! Is an O-line coach really that impactful, or is it consistency of having the same guy teach the same technique year in, year out?

Hey Jeff, Happy New Year to you as well! I absolutely think a great O-line coach can make a difference, which is why New England always had good offensive lines regardless of players or that Bill Callahan has a good O-line no matter what team employs him. That said, it’s also clear that using the same technique year in and year out is helpful for any offensive lineman, particularly young ones.

If the Dolphins beat the Titans on Sunday, will they get any National Media respect?

Hi Jason, hate to break it to you, but the Dolphins already have gotten national media respect. What they’ve also gotten is some skepticism because of the opponents they have faced during their winning streak — and, like it or not, it’s a completely legitimate point. But, yes, if the Dolphins pull out a victory at Tennessee, it will produce even more accolades from the national media.