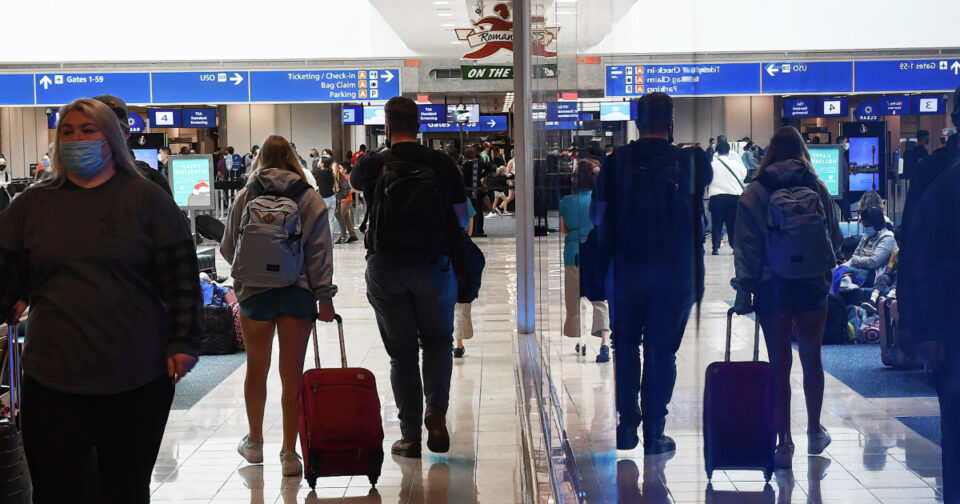 Wintry weather combined with the pandemic to frustrate air travelers whose return flights home from the holidays were canceled or delayed in the first days of the new year.

More than 2,600 U.S. flights and more than 4,400 worldwide were grounded Sunday, according to tracking service FlightAware.

That followed Saturday’s mass cancellations of more than 2,700 U.S. flights, and more than 4,700 worldwide.

“It was absolute mayhem,” said Natasha Enos, who spent a sleepless Saturday night and Sunday morning at Denver International Airport during what was supposed to be a short layover on a cross-country trip from Washington to San Francisco.

Saturday’s single-day U.S. toll of grounded flights was the highest since just before Christmas, when airlines began blaming staffing shortages on increasing Covid-19 infections among crews.

A winter storm that hit the Midwest on Saturday made Chicago the worst place in the country for travelers throughout the weekend. About a quarter of all flights at O’Hare Airport were canceled Sunday.

Denver’s airport also faced significant disruptions. Enos, who was flying on Frontier Airlines, didn’t learn that her connecting flight home to California was canceled until she had already landed in Denver. Then it was a rush to find alternative flights and navigate through baggage claims packed with stranded and confused travelers, amid concerns about the spread of the highly transmissible omicron variant of COVID-19.

“It was a lot of people in a very small space and not everybody was masking,” said the 28-year-old financial analyst. “There were a lot of exhausted kids and some families were so stressed out.”

In Michigan, the authority that runs Detroit International Airport said crews were working around the clock to remove snow and maintain the airfield. Atlanta’s airport authority advised travelers to arrive earlier than usual because of high passenger volume, potential weather issues and pandemic-fueled staffing shortages that could lengthen the time it takes to get through security gates.

And thousands of miles from the closest snow storms, Hawaiian Airlines said it had to cancel several flights between islands and across the Pacific due to staffing shortages.

Southwest Airlines said it was working to help customers affected by about 400 flights canceled around the country Sunday, about 11% of its schedule. The Dallas-based airline anticipates even more operational challenges to come as the storm system pushes into the Eastern seaboard.

American Airlines said most of Sunday’s canceled flights had been halted ahead of time to avoid last-minute disruptions at the airport.

SkyWest, a regional carrier that operates flights under the names American Eagle, Delta Connection and United Express, grounded nearly 500 flights Sunday, about 20 percent of its schedule, according to FlightAware.

Airlines have said they are taking steps to reduce cancellations caused by workers affected by the omicron variant. United is offering to pay pilots triple or more of their usual wages for picking up open flights through most of January. Spirit Airlines reached a deal with the Association of Flight Attendants for double pay for cabin crews through Tuesday, a union spokesperson said.

Airlines hope that extra pay and reduced schedules get them through the holiday crush and into the heart of January, when travel demand usually drops off. The seasonal decline could be sharper than normal this year because most business travelers are still grounded.