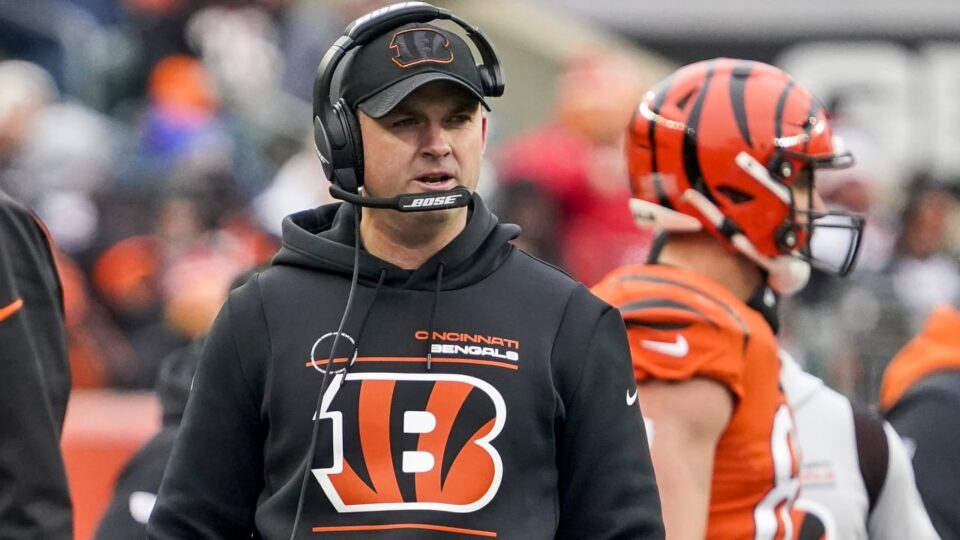 Zac Taylor made the optimal decision to go for it in the final minute of the game — and it paid off!FOURTH QUARTER: With 58 seconds left and the score tied 31-31, the Bengals elect to go for it on fourth-and-goal from the Chiefs’ 1-yard line. Joe Mixon is stopped short of the end zone on a pass from Joe Burrow, but offsetting penalties result in a replay of the down. Now with 50 seconds to go, Cincinnati keeps the offense on the field again. This time, Burrow throws a pass intended for Tyler Boyd, which falls incomplete. However, a penalty on Chiefs cornerback L’Jarius Sneed — who was called for illegal use of hands in his coverage of Boyd — results in a Bengals first down. Since Kansas City has no more timeouts, Cincy calls a quarterback kneel and then a spike before Evan McPherson makes a 20-yard field goal at the end of regulation to clinch a Bengals victory.

The NGS Decision Guide agreed with Taylor’s decisions to go for it. On Cincinnati’s first try, the model recommended going for it by 3.5 percent in win probability value. On the second, 3.8 percent. There are several key data points (or model outputs, you could call them) that go into the formula to generate the recommendation. Let’s break down the WHY behind the numbers. (NOTE: Since the latter fourth-down try was a replay of the down, conversion probability is the same across the two plays. Since eight seconds ran off the clock between plays, win probability effects were slightly different.)

﻿The Bengals had a 70.6 percent chance of converting on the play from exactly 1 yard out, as measured by our ball-tracking data, while a 19-yard field goal was all but a sure thing (98.3 percent). These probabilities are used in the Decision Guide formula in tandem with the hypothetical win probability of every possible outcome; by multiplying the likelihood of each outcome with its implied impact on the game (or chances of Cincinnati winning, in this case), we can isolate the value of each possible decision. Here is how the Bengals’ hypothetical win probability would have played out with each of the four possible outcomes:

Penalty resulting in first down: >99 percentTouchdown: 97 percentMade field goal: 78 percentFailed conversion or missed field goal: 41 percentSince the illegal use of hands penalty resulted in an automatic first down for the Bengals, the result of the penalty was even more valuable than a touchdown. The penalty essentially won the game for the Bengals, while a touchdown would have meant Patrick Mahomes and Co. would’ve had roughly 45 seconds and no timeouts to drive down the field for a game-tying touchdown, and then hang on to win in overtime: a 3 percent proposition. A made field goal would have made the prospects of a Mahomes-led comeback more likely — 22 percent odds. A failed attempt, and the Bengals’ chances of winning drop to 41 percent. The NGS conversion probability and win probability models do account for team and quarterback strength, so these numbers are higher than average, given Mahomes is the opponent here.

On the surface, it would appear Taylor’s Bengals have been among the most risk-averse teams in short-yardage situations. However, by breaking down these situations by time left in the game, we start to see a pattern to Taylor’s methods. Cincy has faced 11 fourth-down situations where the yards-to-go figure was less than 1.5 yards and the numbers strongly suggested going for it (by more than 2 percent in win probability value). In the first and second quarters of games this season, the Bengals did not keep the offense on the field a single time on six such occasions. In the latter three quarters of games, including overtime, the Bengals correctly kept their offense on the field on four of five occasions (without double-counting the two fourth-and-short situations in the last minute on Sunday against the Chiefs).

It is worth noting the NGS conversion probability model has been trained using historical fourth-down plays where penalties on the defense resulting in first downs are considered successes.

Rich Bisaccia calls a perfect game on fourth down, helping fuel an upset winEntering Week 17, Bisaccia ranked among the most conservative decision-makers on fourth down. Between Weeks 6 and 16, the Raiders’ interim head coach went for it on fourth down just three times (out of 11 situations) where the NGS Decision Guide recommended going for it by more than 2 percentage points — at 27 percent of plays, that was the lowest rate in the NFL over that span. But in Sunday’s must-win game, Bisaccia was more aggressive, correctly keeping the offense on the field twice when the numbers suggested doing so, including once at a critical juncture in the second half.

FOURTH QUARTER: With 11:24 remaining and Las Vegas tailing 17-13, the Raiders elect to go for it on fourth-and-2 from the Colts’ 11-yard line. Derek Carr completes a pass to Hunter Renfrow for an 11-yard touchdown.

The Raiders had just a 23 percent chance of winning the game before that play. A made field goal would have actually dropped the team’s chances of winning (to 20 percent), as they would still be down one possession. Instead, Bisaccia put the ball in his quarterback’s hands to convert in short yardage, a decision that netted the Raiders 3.5 percentage points in expected win probability, and the go-ahead score.

This decision shows the upside of being aggressive on fourth down — Las Vegas picked up the necessary yardage, and then some, scoring a touchdown on the play and increasing its win probability to 40 percent. The Raiders’ defense held the Colts to a field goal on the subsequent drive, enabling the game-winning FG drive that keeps Vegas in the playoff race.

Nick Sirianni makes the right fourth-down decisions near the goal line and late in the gameThe Eagles were able to survive a tough division matchup and pull off a crucial win in which they did not hold a lead until the fourth quarter. Despite ending their first possession with a turnover on downs, Sirianni stayed resilient, going for it in three out of four situations where the NGS Decision Guide favored go by at least 1 percentage point in expected win probability value.

THIRD QUARTER: With 7:27 remaining and Philadelphia trailing 16-7, the Eagles elect to go for it on fourth-and-goal from Washington’s 1-yard line. Boston Scott runs for a 1-yard touchdown.

Sirianni could have called on the field goal unit to cut the Eagles’ deficit to a one-possession game; however, such a field goal would have significantly reduced the team’s chances of winning. Before the play, Philadelphia had a 39 percent chance to win. That number jumped to 46 percent when the Eagles went for it and scored. Had they elected to kick a field goal, even a make would’ve dropped the win probability to 31 percent. Going for the touchdown offered significantly more upside than a field goal attempt, and was still more than likely to be successful (57 percent conversion probability). Taking these factors into account, the NGS Decision Guide found going for it to be the optimal call by 6 percentage points in expected win probability.

That was the second time the Eagles faced a fourth-and-goal in short yardage. Scott notched touchdowns on both occasions. But Sirianni also had a crucial fourth-down decision late.

FOURTH QUARTER: With 5:36 remaining and Philadelphia leading 17-16, the Eagles choose to go for it on fourth-and-1 from Washington’s 42-yard line. Jalen Hurts sneaks behind the left guard for 3 yards and a first down.

Even after taking the lead, Sirianni stayed aggressive on fourth down. Rather than opting for a short punt to play the field-position game, Sirianni correctly kept the offense on the field in his most impactful decision of the day, according to the NGS Decision Guide. We had this as a very strong go for it recommendation — by 10.4 percentage points in win probability value.

After converting on a Hurts sneak, the Eagles were able to wind the clock down further and get into field goal range, eventually stretching the lead to four points. This forced Washington to play for a touchdown, instead of a field goal, when the Football Team got the ball back with just over two minutes left in the game. Washington drove deep into Philly territory, but Eagles safety Rodney McLeod clinched the game with a pick in the end zone.

Coker: Machida to finish career ‘on his own terms’