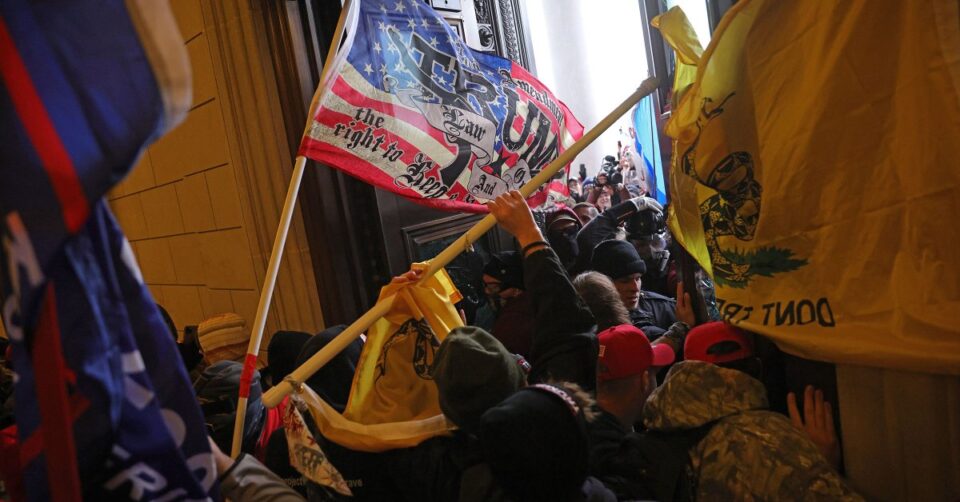 Washington can be a shameless place. Until it isn’t—at least for a moment, here and there.

In the days after a mob surmounted Capitol Hill, overran the Capitol itself and desecrated the temple to American democracy in a brazen attempt to reverse the results of an election, many in the Jan. 6 horde went into hiding. Realizing—too late, it turns out—that they had overstepped what polite society would accept, they and the radicalized cells in their real-life and online communities tried to shrink their visibility. The pics and videos taken in the middle of the riot quickly became self-incriminating evidence of what was probably the most documented crime spree in history. Flying your organization’s flag loud and proud all but guaranteed someone from the FBI would be knocking on a door in short order, and perhaps lead officials to charge the group, too.

The pivot was obvious. Even some of Trump’s most reliable apologists seemed to break with him with just days left on his four-year term of chaos. “Count me out. Enough is enough,” Sen. Lindsey Graham said from the Senate floor. “We’ve got to end it.” (Hours earlier, we now know via an outstanding Washington Post reconstruction of that day, Graham had told Capitol Police to shoot the mob: “You’ve got guns. Use them.”)

Back home, as the feds started scooping up enough evidence to charge more than 700 individuals for their roles in breaching the Capitol and sending lawmakers into hiding, many of Graham’s would-have-been targets tried to scrub all proof that they were, in fact, parts of a failed insurrection as pandemic “sedition hunters” hunted them down.

The mob’s self-doubt turned out to be short-lived, however. Trump kept banging the false claims that he had won, that the radical left was to blame for the insurrection and that the true victims were the patriots carrying his flags as they scaled the facade of the Capitol in its first breach by a group since the Brits took it in 1814. Even this fall, his spokesman described the troublemakers as “agitators not associated with President Trump”—a belief incorrectly shared by 41% of Republicans, according to CBS’ poll last week.

According to a report out today, the sheepishness on the far right has not proven permanent, but it did bring a shift in organizing strategies. Researchers with the Atlantic Council’s Digital Forensic Research Lab find the paranoia that followed the attacks gave way to more offline and more localized work. “Think before you post. They are watching. I learned the hard way,” one user posted to a pro-Trump message board, along with a picture of an FBI buiness card. People moved from the national fight to more local divides in politics and culture, such as fighting school curricula and mask mandates, according to the study.

Those who stayed plugged in migrated off mainstream platforms like Facebook and onto systems designed for the far right and by the far right, like Gab. Their efforts, too, went hyper-local. “Conducting activism on smaller scales enables them to operate without the scrutiny or detection that doing so on a national scale often brings with it,” DFRLab researchers write. It allows radicalization to happen at a faster clip than if on a more mainstream—and wider audience—platform. It’s like boiling a cup of water versus a huge stock pot.

In other words, Trump’s talent to radicalize may be stronger than the shame—or self-preservation, if we’re being utterly cynical—that arose in the days and weeks after the attempted coup. “The sentiments espoused by domestic extremist causes are as public and insidious as ever, making their way into mainstream conservative discourse,” the report’s researchers write. That’s a pretty clear and dire warning about online extremism that TIME’s Vera Bergengruen and W.J. Hennigan have been documenting for the last year.

It’s tempting to write these disaffected folks off as delusional clingers to the Big Lie that Trump actually won the 2020 election. But these aren’t the fringes of the GOP quilt at this point; it’s the tableau central to the tapestry. There’s a reason that even those critical of Trump’s role in riling up the mob and delayed and half-hearted attempts to quiet it have changed their tune. The Project on Security and Threats at the University of Chicago has been tracking this “American Insurrectionist” movement for the last year, and it finds 21 million Americans hold the same beliefs as the mob last year. It’s a slice of the more than 158 million people who voted last year, but 21 million people can’t be wholly discounted by the officials they help keep in power.

Just consider Minority Leader Kevin McCarthy, the top Republican in the House. “The President bears responsibility for Wednesday’s attack on Congress by mob rioters,” McCarthy said on Jan. 13, days after he was shouting into his cell phone on Jan. 6 for help. “He should have immediately denounced the mob when he saw what was unfolding. These facts require immediate action by President Trump.” On Jan. 28—eight days after Trump left power and several rounds of polling later—McCarthy was in Palm Beach, Fla., for a meeting with Trump at his private club.

Dreams of a post-Trump Republican Party were cut short by this reality: the former reality-show star and record-holder for most impeachments as President remains the spine of the party. If Republicans are to have success with the party’s base, they need Trump’s blessing. But it alone may be insufficient, too. He created a new identity for the GOP, but one whose conclusion is far from certain as it has mutated from beholden to Trump to perhaps something even more illogical and illiberal. After all, a crowd in Texas booed Trump on Dec. 20 when he told them that he had been vaccinated and boosted.

This isn’t just a hunch about what Jan. 6 showed America about itself. It’s quantifiable. Among all voters, the expectation is now to expect violence from the losers; a full 62% in the CBS poll says that future presidential elections will come with a side of insurrection, 30% said it might be justified to form a political militia, and 14% said it might be OK for the candidates to urge violence. Out with the phone banks and in with the pistol practice.

Which brings us back to shame and the lack thereof. As much of Official Washington gathers on Thursday—COVID-19 protocols willing—to mark the one-year anniversary of the incomplete insurrection, the ex-President himself plans to hold his own Big Lie counterprogramming. For Republicans looking to cynically use Trump’s sway to win their elections this year, you can bet they’ll be saying more prayers aimed at Mar a Lago than to the recovery of more than 150 police officers physically injured that day, the trauma everyone who calls the Capitol their workplace endured and to the memory of those whose lives ended that day and in the months that followed. After all, shamelessness flickers from time to time in Washington, but it’s a tough one to snuff out—at least until it is a direct threat to you.

PlayStation VR2 is the Official Name for Next-Gen PSVR, Horizon Call of the Mountain Announced