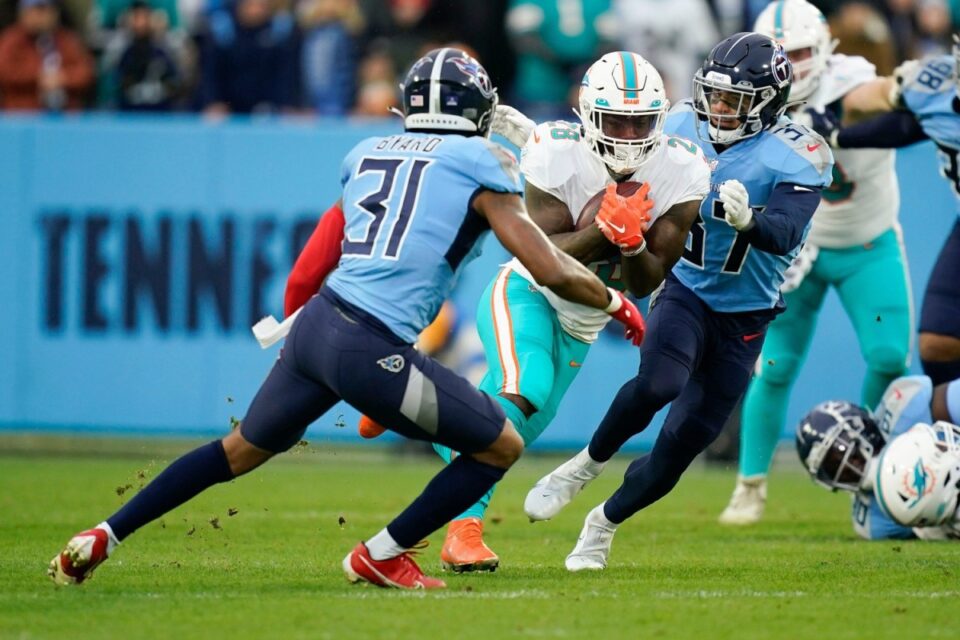 The end of the Miami Dolphins winning streak meant the end of their steady climb not only in the standings but also in the national power rankings.

And, as one would expect, it’s those national media outlets who had the Dolphins highest who gave them their biggest drop after their humbling 34-3 loss against the Tennessee Titans at rainy Nissan Stadium that ultimately ended their postseason hopes.

In our weekly roundup of seven national power rankings — SI, NFL.com, ESPN, CBSSports.com, Pro Football Network, Yahoo Sports and USA Today — the Dolphins ranged from a high of 17th to a low of 22nd after the games of Week 17.

Here’s a roundup of the 2021 power rankings heading into Week 18, with the previous ranking in parentheses and the comments from each outlet:

Analysis: “Brian Flores’s team heads back to the loss column but not without showing some serious fortitude and ingenuity this year. Ultimately, they now know what they have in Tua Tagovailoa, what it will take to build even more aggressively around him, or how much easier it will be to pull the plug and go after an established starter.”

Analysis: “The Dolphins had the chance to show the doubters their seven-game winning streak wasn’t merely the product of a soft schedule — then delivered a flat performance against the Titans that validated all those naysayers. The defense was bullied by a Tennessee running game missing Derrick Henry, while Tua Tagovailoa struggled through a poor performance that featured two turnovers and nary an impact play when the outcome remained in doubt. When the Dolphins decision-makers need to decide what to do at the QB position this offseason, one can imagine Week 17 sticking in their heads.”

Analysis on the team’s suggested New Year’s Resolution (Support Tua!): “Dolphins general manager Chris Grier has spent four top-90 picks on offensive linemen since 2019 — and they still own the worst pass-blocking offensive line in 2021. With nearly $80 million of projected cap space this offseason, it’s time to stop throwing draft picks at this problem and start spending serious money on it. While he’s at it, draft an impact running back on the second day of the draft; Grier’s preference is to wait until Day 3, and it shows on the field. Miami has a decision to make when it comes to quarterback Tua Tagovailoa after next season. It needs to either put a supporting cast around him that can help him succeed or put the pieces in place for Tagovailoa’s successor if the team decides to move on.”

Analysis: “They were eliminated from the playoffs in losing to the Titans. Tua Tagovailoa was not good in a big moment, which means he might not be their long-term guy.”

Analysis: “During the Dolphins’ seven-game win streak, there was a ton of talk about their relatively easy schedule. Still, it’s important to note that it’s incredibly difficult to win football games in the NFL, no matter what the level of competition looks like. This season has been proof of that. But in bad weather, Miami’s passing attack was rendered non-existent outside of one deep bomb to Jaylen Waddle. Tua Tagovailoa struggled under pressure from Tennessee’s front four, and he never found a groove throwing the ball — or keeping control of it — in the wind and rain.”

Analysis: “It’s a bummer the Dolphins were eliminated in Week 17. Their comeback from 1-7 was fun. Seeing the offense fail miserably at Tennessee is going to open up another round of Tua Tagovailoa bashing, and Deshaun Watson speculation.”