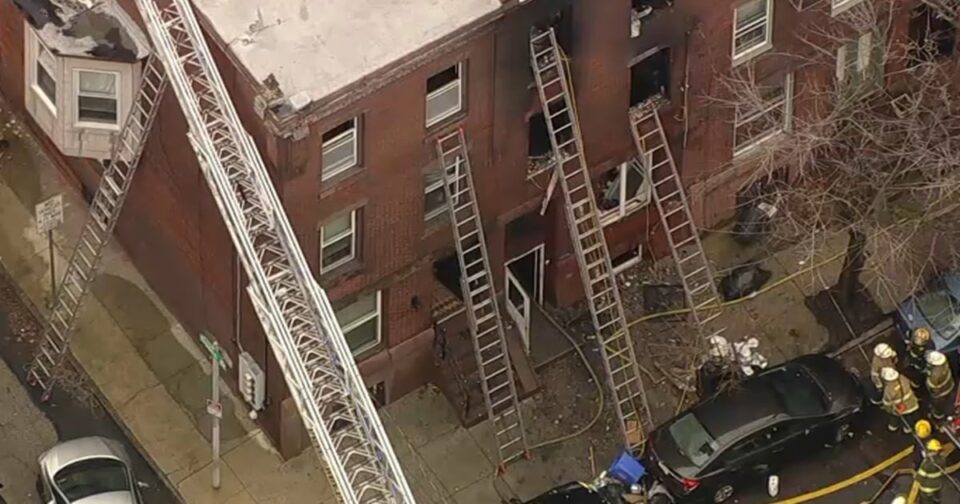 At least 13 people, including seven children, were killed Wednesday morning after flames ripped through a Philadelphia rowhouse, fire officials said.

Firefighters arrived at the three-story structure at 869 N. 23rd St. in the city’s Fairmount neighborhood at about 6:40 a.m. EST, according to the Philadelphia Fire Department.

It took about 50 minutes to control the blaze, the department said.

Even hours after flames were extinguished, firefighters were still going through the rubble and feared there might be more victims.

In addition to the 13 fatalities, two people were in critical condition, according to authorities. One of those injured was taken to Children’s Hospital of Philadelphia and the other to Temple University Hospital, officials said.

“That number is dynamic,” First Deputy Fire Commissioner Craig Murphy said of the preliminary death toll. “There is still an ongoing recovery effort.”

Firefighters encountered fast-moving flames in a second-floor kitchen and a stairway connecting the second and third floors.

There were four battery-operated smoke alarms in the building and none of them worked, officials said.

“This is without a doubt one of the most tragic days in our city’s history, the loss of so many people in such a tragic way,” an emotional Philadelphia Mayor Jim Kenney told reporters.

It appeared that most of the damage was contained to one building in the densely populated residential neighborhood.

Real estate records indicate the rowhouse is owned by the Philadelphia Housing Authority.

“I don’t have the words for how we’re feeling right now as a community and as a department,” Murphy said.

Eight people lived in one unit that spanned the first and second floors, while 18 resided in another unit that took up the second and third floors.

“That is a tremendous amount of people to be living in a duplex,” Murphy said.

State Sen. Sharif Street, who represents the neighborhood where the fire happened, also wondered about the number of people housed under one roof early Wednesday.

“Why were so many people choosing to live in one structure? Certainly if they had better options they would have made better choices,” Street told NBC Philadelphia. “I don’t want to prejudge … but we all know this should not have happened.”

Kenney said he understood the difficult housing choices some families have to make.

“You talk about the number of people in the house, sometimes it’s better for people to be indoors than on the street,” he said.

“You don’t know the circumstances of each and every family. Maybe there are relatives or people who needed to be sheltered. Obviously the tragedy happened and we all mourn for it. But we can’t make judgment on the number people living in a house because sometimes people just need to be indoors.”

A cause of the fire was not immediately found.

“We plan on and intend on getting a cause for this fire,” Murphy said. “We plan on making sure that this tremendous loss life did not happen in vain.”

The building was last inspected in May and all smoke detectors were working at that time, according to Dinesh Indala, the housing authority’s senior executive vice president of operations.

“I don’t know if they were replaced or tampered with,” Indala said, when asked why smoke detectors apparently did not work on Wednesday morning.

Indala said the housing authority is cooperating with fire investigators and he pleaded with residents: “Please don’t tamper with the smoke detectors and don’t the batteries out for any reason.”

The structure, built around 1920, sits on top of a 1,105-square-foot lot and had no outstanding code violations, according to city building department records.

The urban block is just a 15-minute walk from the Philadelphia Museum of Art, home of the famed “Rocky” steps, and a little more than one mile south of Temple University.

Wednesday’s tragedy came 13 years and a week after seven people in southwest Philadelphia died in a late December 2008 blaze.

Four children were killed in another southwest Philadelphia fire in July 2014.