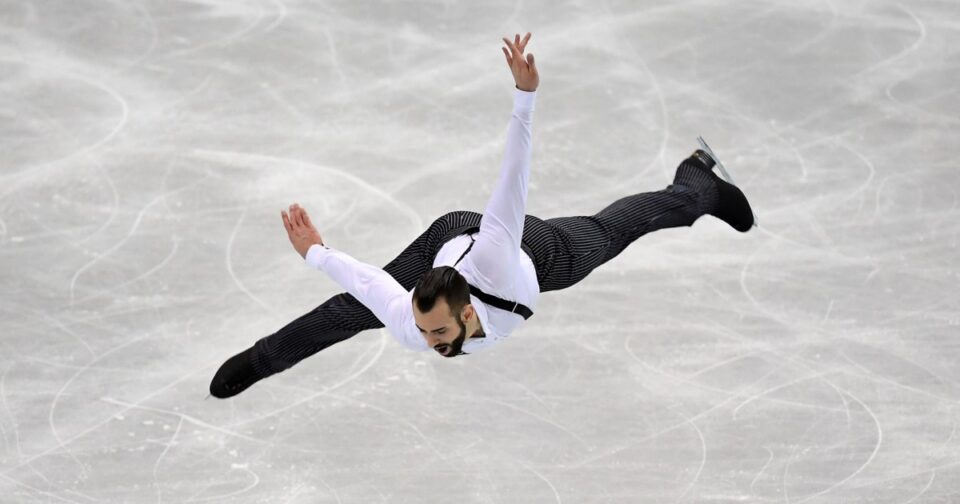 On Thursday, LeDuc, who uses gender-neutral pronouns, and their partner, Ashley Cain-Gribble, will compete in the U.S. Figure Skating Championships with the hope of securing a spot on Team USA for the 2022 Winter Olympics, in Beijing in February.

If they succeed, LeDuc would become the first out nonbinary person to compete in the Winter Games.

LeDuc, 31, is no stranger to historic firsts — they were the first openly gay athlete to win gold in a U.S. pairs event in 2019 — but making Team USA would be especially meaningful because LeDuc, who is from Cedar Rapids, Iowa, hasn’t always felt welcome in their sport.

In an interview on the latest episode of NBCLX’s podcast My New Favorite Olympian, they said as a person who “exists and really thrives outside of the binary,” navigating a gendered sport can be complicated.

“They’re going to be the people that don’t understand it or would be very quick to push me back into the box of, you know, they look at me, they see that I have a beard or they look at maybe my physical characteristics and say, ‘You’re a boy; act like a boy. What are you doing?’” they said.

LeDuc said they once had a tryout with a girl who refused to skate with them.

“She thought me being gay was going to be a liability,” they said. “It was not an option for her in an otherwise great partnership that girl and I could have had.”

In another incident, one of their coaches pulled them aside prior to an international competition and said, “Timothy, go out and show them how masculine you are. That’s how you will win,” LeDuc recalled.

Then, in 2016, LeDuc found their current skating partner, Cain-Gribble, who accepted them and celebrated their nontraditional partnership.

“When Timothy and I teamed up, we never wanted to be what was looked at as the traditional team,” Cain-Gribble said on the podcast. “They always had the storyline of the male is super masculine and strong and always just to come in and save the girl who is a wilted little flower and is weak, or it was a full-on love story, where obviously a male and a female fall in love with each other.”

LeDuc said Cain-Gribble understands their “struggle for finding authenticity” because at 5 feet, 6 inches tall, she is about six inches taller than her competitors, and she’s been told her body isn’t right for the sport.

“I don’t think Ashley was really ever interested in being the fragile girl,” LeDuc said. “She’s such a powerful, amazing athlete. So for her, when I kind of came to her and said, ‘You know, I don’t really want to do this romantic style. It doesn’t really seem like us,’ she was like, ‘Heck yeah, I’m good with that.’”

LeDuc’s journey to finding a supportive figure skating partner and winning gold at the national championships in 2019 hasn’t been an easy one. When they came out to their parents as gay at 18, they said their family was attending a traditional evangelical church, so their reaction was, “We love you, but we need to change you.”

“At one point, one of my family members brought friends home from a church group, and they basically tried to perform an exorcism on me, tried to cast my demons out and were praying on on all sides of me, trying to remedy my, we called it, same-sex attraction,” LeDuc said.

They said their parents are now supportive and were accepting when they came out as nonbinary at 28. But the figure skating world remains rigid in its traditional gender expectations for athletes, LeDuc said, and that’s something they are trying to help change.

LeDuc is involved in an athlete mentorship program through the United States Olympic and Paralympic Committee’s Athlete Advisory Council.

An increasing number of athletes have come out as transgender or nonbinary in recent years. Openly transgender athletes competed for the first time in Olympics history during the Summer Games. New Zealand weightlifter Laurel Hubbard competed in the women’s super-heavyweight 87 kilogram-plus (192 pound-plus) category, BMX freestyler Chelsea Wolfe traveled to Tokyo as an alternate on Team USA and nonbinary American skateboarder Alana Smith competed in women’s street.

Canadian soccer player Quinn became the first openly transgender and nonbinary athlete to win an Olympic medal following their team’s defeat of Sweden in the women’s final in August.

Overall, a record-breaking 186 out LGBTQ athletes (at least) competed at the Summer Games, according to the LGBTQ sports website Outsports. LGBTQ athletes, or Team LGBTQ, as Outsports referred to them, won a 33 medals.

Cyd Zeigler, co-founder of Outsports, said many of the teams for the Winter Games are currently being named, so the website doesn’t have an initial tally of how many LGBTQ athletes are competing.

However, Zeigler said in an email that he’s “confident that the total will be more than double” what it was in the 2018 Winter Games in Pyeongchang, South Korea, where at least 15 out LGBTQ athletes competed.

LeDuc and Cain-Gribble will compete in pairs short Thursday and pairs free Saturday at the U.S. Figure Skating Championships.

Far-right forums thrive after Capitol attack, but stumble over Trump and riot’s legacy