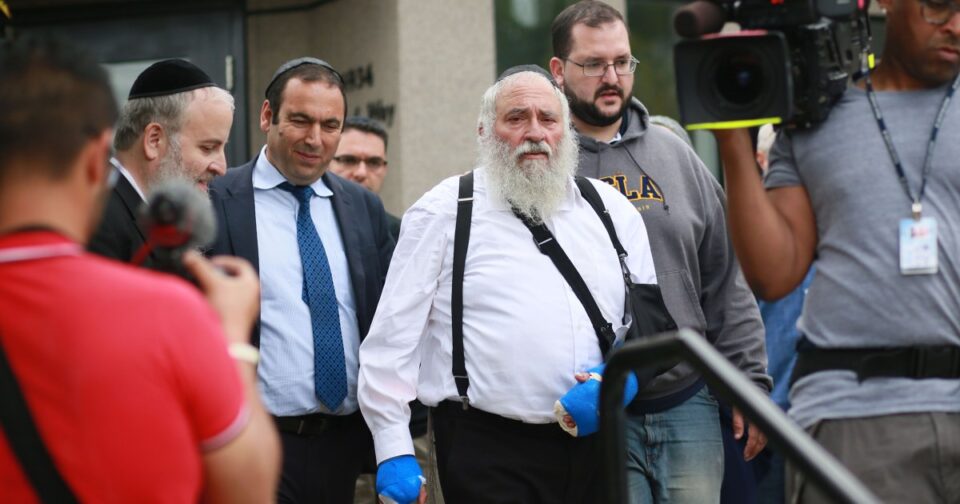 SAN DIEGO — A rabbi who was badly wounded in a deadly antisemitic attack at the Chabad of Poway synagogue in Southern California was sentenced Tuesday to 14 months in federal prison for running a multimillion-dollar donation fraud, authorities said.

Yisroel Goldstein, 60, also was ordered to pay about $2.8 million in restitution. He pleaded guilty in 2020 to wire and tax fraud.

“I beg for mercy to accept my repentance and allow me to right the wrongs,” Goldstein told the judge at his sentencing, the San Diego Union-Tribne reported. He asked for “the chance to do whatever I can to help others to the best of my ability.”

Prosecutors and the defense had both recommended that Goldstein receive home confinement rather than prison, citing his cooperation in the FBI’s fraud investigation and the trauma he received in the 2019 attack. Prosecutors also said Goldstein had played an exemplary role after the April 2019 shooting by speaking out for peace and religious tolerance.

However, federal Judge Cynthia Bashant said Goldstein should go to prison because he defrauded people who thought they were helping the synagogue “when in fact it was really just to benefit you,” the Union-Tribune reported.

“It was for your personal benefit and your own greed, and I can’t ignore that fact,” the judge said.

Goldstein was the longtime leader of the Chabad synagogue near San Diego, which he founded in San Diego in 1986. He lost his right index finger in the attack on the last day of Passover, which killed one congregant, Lori Gilbert-Kaye, and injured the rabbi and two others.

The rabbi received an outpouring of support, addressed the United Nations and met with President Donald Trump at the White House.

Before the attack, Goldstein had been under investigation by federal authorities and he stepped down as rabbi in November 2019, citing exhaustion.

He was accused of collecting $6.2 million in fake donations to the synagogue and affiliates. Prosecutors said he returned 90% to contributors with phony receipts, allowing them to deduct the full amount from their taxes while Goldstein kept the remaining 10%, or $620,000, for himself. One donor got back his contribution in the form of $1 million in gold.

The scheme and others spanned years and even decades, prosecutors said, and resulted in losses in federal taxes, to the synagogue that never received the donations and to companies that matched donations and never got back their contributions.

The rabbi also admitted taking about $185,000 from the Federal Emergency Management Agency and California Governor’s Office of Emergency Services by submitting fake invoices for damage related to 2007 wildfires.

At least 20 people were involved in the schemes and a half-dozen, including Goldstein, pleaded guilty to federal charges, prosecutors said.

They included Alexander Avergoon, whose real estate dealings sparked the investigation in November 2016. Avergoon was arrested in Latvia. On Monday, he was sentenced by the same judge to more than five years in prison for the Poway frauds and an unrelated, $12 million real estate scam.