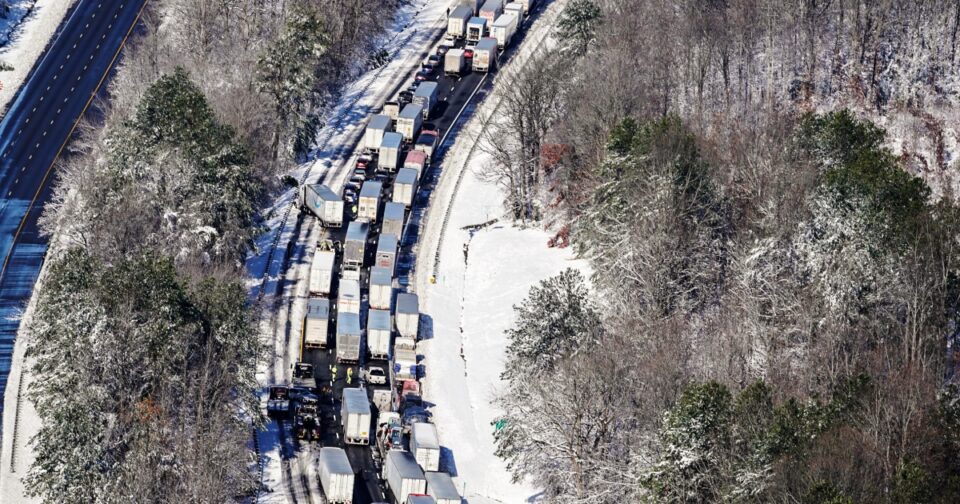 An Uber passenger who got stuck in the chaos of the I-95 highway shutdown in Virginia was issued a full refund after after the ride-hailing service slapped him with a $700 bill.

He requested an Uber to take him to Richmond, where he lives. Once they got on the highway, Peters and the Uber driver quickly realized traffic was not moving.

“We hopped on the first exit and then it was just, we stopped moving right there. There were cars behind us. There was nowhere to go,” Peters told NBC Washington. “It was like being in some weird parking lot.”

He was one of thousands stranded in their cars along the 50-mile closure in the Fredericksburg area that started Monday morning due to a big-rig accident. Vehicles were left stalled in freezing temperatures amid the first mid-Atlantic snowstorm of the year, many without supplies or access to fuel.

“People were walking around a lot, which was crazy,” Peters said. “I was like, I don’t want to go too far out there in case traffic starts moving again.”

Uber’s website states that “heavy traffic may cause your trip to take longer than expected and to compensate your driver for the additional time, your fare may change.”

Peters said he was “ticked off” by the hefty charge.

“I had no way of knowing that I would be stuck in this traffic jam for that long, and I don’t feel like that’s fair because they have the directions. I have no say in which way the Uber goes,” Peters said.

He disputed the charge and was refunded, Uber confirmed to NBC News.

“We recognized that the prolonged highway shutdown was extraordinary circumstance for him and the driver,” an Uber spokesperson said.

The havoc on the highway ended nearly 30 hours later on Tuesday.

In a phone briefing Tuesday, Virginia Gov. Ralph Northam said motorists were repeatedly warned to stay off the roads because hazardous conditions were likely.

“We were prepared for predicted few inches of snow, not a whole foot,” he said.

Sen. Tim Kaine, D-Va., was one of the many drivers left stuck on the road. He tweeted Tuesday afternoon that he had been stuck in traffic for 27 hours before making it to his office.

“Ok after 27 hours on the road from Richmond to DC, very happy to be back in the Capitol and working on voting rights legislation this afternoon,” he wrote.

NBC News correspondent Josh Lederman was one of the passengers who got stuck on the highway with his pet dog in the back seat.

“The interstate is absolutely littered with disabled vehicles. Not just cars. Semis, everything. Nobody can move. People are running out of gas or abandoning vehicles,” he tweeted.

Later, he told NBC’s “TODAY” show that he had made it back home safely after what he described as a “crazy night.”

“We were lucky. We had enough gas to make it through without losing power to the car. We were OK without having water and food, but this was a scary situation,” Lederman said.

“I think people expect, given the weather that we were having here, that you might face some delays on the road,” he said. “People were not anticipating, at least I certainly was not, that they would have to be spending the entire night waiting to see if anybody was going to come and clear the road so that people would be able to get out.”