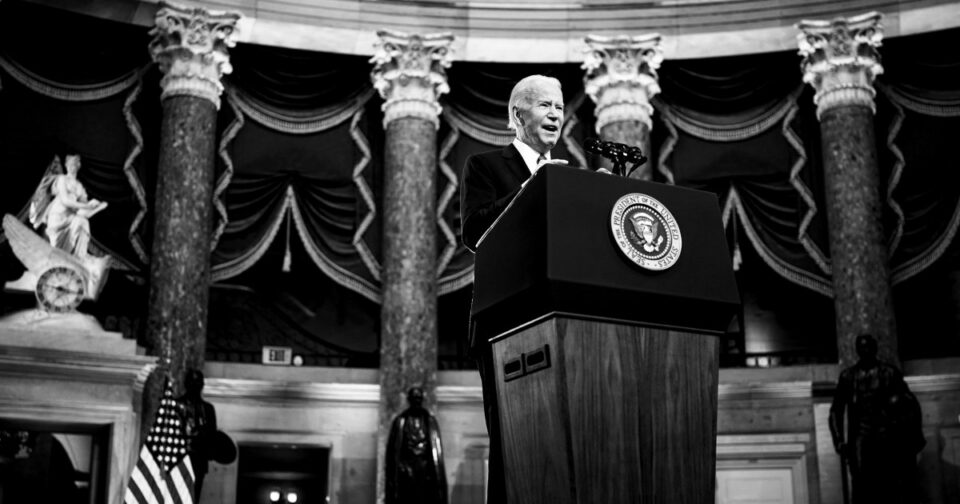 On Thursday, Donald Trump’s “bruised ego” may have handed it to him.

In a forceful speech roundly described as his most powerful since he took office, Biden pinned responsibility for the horrors of the Jan. 6 Capitol attack on Trump, painting him as a sore loser whose inability to embrace the truth of his defeat only deepened the political chasm dividing Americans.

“The former president of the United States of America has created and spread a web of lies about the 2020 election. He has done so because he values power over principle, because he sees his own interest as more important than his country’s interest, than America’s interest,” Biden said of Trump. “And because his bruised ego matters more to him than our democracy or our Constitution, he can’t accept he lost.”

It was a rare moment during Biden’s presidency when he stepped outside his cloak of unity and directly blamed the violent upheaval on Trump.

Biden’s decision to speak so plainly cheered many of his supporters.

“This is something that will be welcomed by almost every Democrat,” said longtime Democratic operative Simon Rosenberg, the president of NDN, a center-left think tank based in Washington.

Rosenberg was among those who urged the White House for months to escalate its rhetoric about ongoing threats to democracy.

“The radicalization of the GOP is something we can no longer ignore,” he said.

Greg Schultz, Biden’s onetime campaign manager, said his phone lit up at the close of the speech with texts like “This is the Biden I supported” and “Literally, the best speech he’s given in years.”

“This is when Biden is most powerful,” Schultz said in an interview, citing Biden’s fear of an erosion of democracy as the motivating force behind his White House run. He said Biden finally got personal with Trump on Thursday because there was no way he couldn’t.

“This is one of the times when you don’t have a choice. It is clear that Jan. 6 wouldn’t have happened if it weren’t for Trump,” Schultz said. “This is one time when you can’t remove the instigator, because the event was so egregious to the republic.”

Tapping into his party’s outrage at “the former president” offered a respite, however brief, from the grim, unrelenting reminders of record Covid case numbers, school closings and rising consumer prices. Some Democrats saw the move as a vital use of the president’s bully pulpit, given the looming midterm elections, which could mean unending and unfounded challenges to election results and even the threat of violence.

In the year since a mob of his supporters assaulted the Capitol to disrupt the electoral vote count formalizing Biden’s victory, Trump has continually repeated his insistence that the election was stolen. He has solidified his power over Republicans as parts of the party break off into more radicalized factions.

“The president made pretty clear today that defending democracy is going to be central to his agenda in 2022,” Rosenberg said. “It was always there, and the primary reason he ran for president. But in 2021 other vital priorities crowded out the president’s democracy agenda.”

He said Biden’s remarks made it clear that the battle between democracy and autocracy is now “definitional for the Biden presidency.”

That’s the case for Democrats in Wisconsin, where Republican Ron Johnson’s Senate seat and the critical governor’s seat will be up for grabs in the midterms and the Republican-controlled Legislature hasn’t been shy about flexing its muscle to question its electoral systems.

“I am personally very terrified of what they’re doing in Wisconsin, the national implications and the guardrails that might be out,” said Irene Lin, the campaign manager for Tom Nelson, who is running in the Democratic primary for the Senate. “Voters need to be reminded not to be complacent.”

A GOP Legislature and a Democratic governor have meant unending battles — in and out of court — over election results and the state’s electoral process.

Nelson’s campaign used the anniversary of the riot to ask the House committee investigating the attack to subpoena Johnson’s “phone and text records; logs and schedules; email records; and any other records relevant to his work seeking to undermine the peaceful transfer of power.”

“Sen. Johnson was singular as THE most vocal and prominent legislator promoting dangerous mistruths about the 2020 election in the days preceding the attack,” Nelson’s letter said. “His role has been overlooked at times due to attention given to other Senators such as Josh Hawley.”

The feasibility of the request remains unclear. The chairman of the Jan. 6 committee, Rep. Bennie Thompson, D-Miss., recently said on NBC’s “Meet the Press” that there was “no reluctance” by the House panel to subpoena members of Congress but that questions remained open about whether the panel had the authority.

Other Democrats in the race have highlighted the threat of democracy. One of them, Milwaukee Bucks executive Alex Lasry, cited the attack on the Capitol this week as he laid out a policy proposal that would expand voting rights and end both the filibuster in the Senate and gerrymandering.

Lt. Gov. Mandela Barnes offered a similar proposal last month. And state Treasurer Sarah Godlewski released a digital ad that spliced violent images of the attacks on Jan. 6 against Johnson’s remarks on TV defending those who were at the Capitol that day.

Johnson’s office did not respond to a request for comment.

In 2018, when he was still considering a presidential run, Biden was reading “How Democracies Die,” and in conversations he tried to raise the alarm about the potential proliferation of events like the violence at the white nationalist rally in Charlottesville, Virginia, in 2017.

“A hundred times I heard him tell people about this book,” Schultz said. Biden would tell others that the death of democracy happens after an erosion of democratic principles over time, which he saw as a threat under Trump. “He would never have run for president if he thought our democracy and our republic was secure,” Schultz said.

Once he was in office, however, Biden viewed his role as that of healer-in-chief and worked to turn down the temperature, often citing the need for “unity” and bipartisanship, even as factions of the GOP grew bolder in their refusal to accept the 2020 election results.

In remarks to reporters after his address, Biden was asked whether pointing the blame at Trump further politicized the day.

“No, look, the way you have to heal, you have to recognize the extent of the wound. You can’t pretend,” Biden said. “I’d just as soon not face it. You got to face it. That’s what great nations do. They face the truth, deal with it and move on.”

Biden deliberately steered clear of tying voting rights into his remarks, as some had hoped.

The move was intended to keep the focus on the depth and the severity of the Jan. 6 attacks, a White House adviser said. But amid a reinvigorated push by Senate Democrats for federal elections legislation, including Majority Leader Chuck Schumer of New York, the White House said Biden would give a speech about voting rights in Atlanta on Tuesday.

The significance is hard to miss, given Georgia’s pivotal role in sealing Trump’s 2020 defeat and its prominence in the battle over voting rights. Before Biden, a Democrat hadn’t won the state in a presidential contest in 30 years.

The irony in Pope Francis’ putdown of childless couples

Venmo, PayPal and Zelle must report $600+ in transactions to IRS