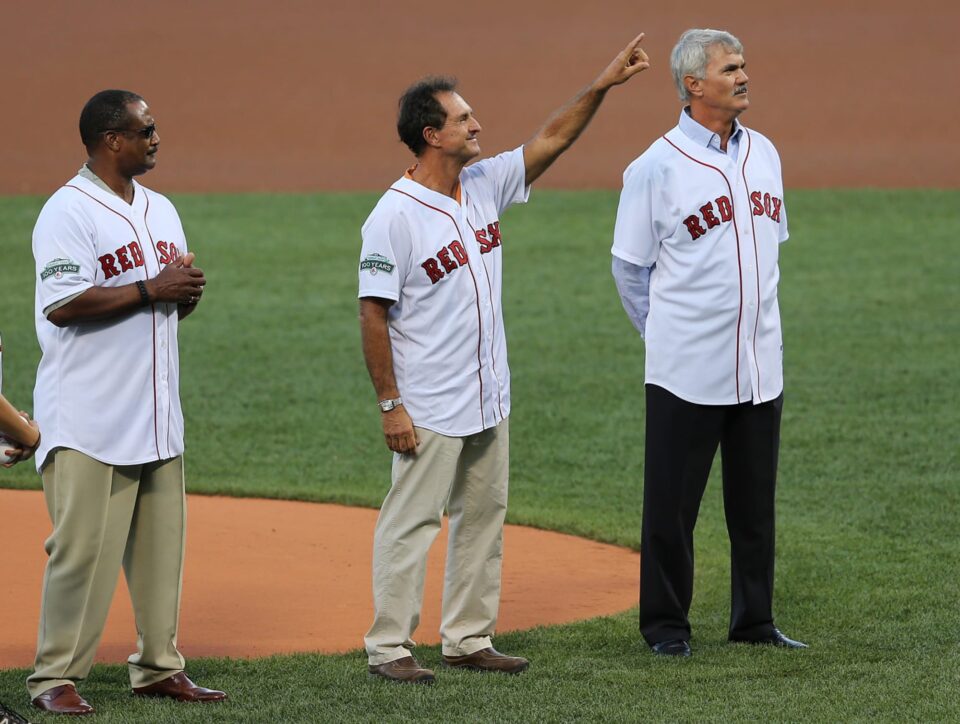 BOSTON, MA – AUGUST 22: Jim Rice, Fred Lynn, and Dwight Evans, former Red Sox players, react to the cheers of fans before a game against the Los Angeles Angels of Anaheim at Fenway Park on August 22, 2012 in Boston, Massachusetts. (Photo by J Rogash/Getty Images)

The MLB lockout is still in effect and there are no signs of it reaching a conclusion in the near future. So how is MLB Twitter to pass the time with literally no free agency signing moves during this time? Well, how about make a hypothetical Netflix show?

Red from the Surviving Grady blog asked Netflix to make a show featuring former Boston Red Sox outfielders. That is when Red Sox legend Fred Lynn replied to the Twitter post, asking if he and Jim Rice and Dwight Evans can join the show.

Fred Lynn wants in on Netflix show starring former Red Sox outfieldersWho would not want to see this legendary trio in a Netflix show?

Lynn, Rice and Evans were teammates together dating back to 1974 until Lynn was traded from Boston to the California Angels after the 1980 season. During their time together, Lynn (1975) and Rice (1978) each won the American League MVP award. Evans had three Gold Gloves to go along with Lynn’s four. Oh, and Lynn (six), Rice (four) and Evans (one) were frequenters of the All-Star Game during their time together.

Given the lack of traction on the collective bargaining agreement front, MLB Twitter is out pitching shows for streaming services. When it comes to a show starring former Red Sox outfielders, Lynn wants in.

Kurt Busch predicts Johnson will shine on ovals in IndyCar

5 Lessons Entrepreneurs Can Learn from the Elizabeth Holmes Theranos Trial