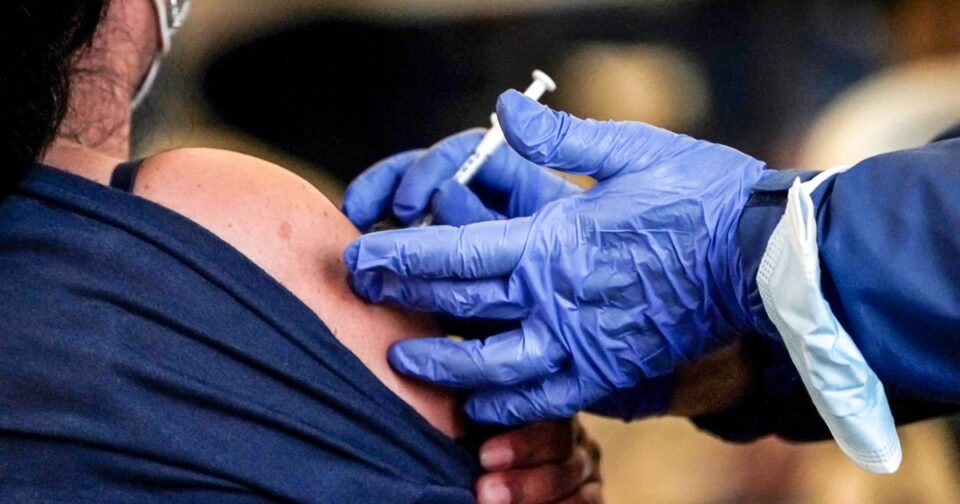 The Supreme Court met in a highly unusual session Friday to hear arguments on two Biden administration measures intended to help stop the spread of Covid in the nation’s workplaces.

The justices were not scheduled to return to the courtroom until Jan. 10, but they agreed late last month to take up emergency appeals involving the federal vaccination or testing requirements for large employers and the vaccination mandate for some health care workers.

The liberal justices mounted an aggressive line of questioning about the need to continue to fight the pandemic using vaccines.

“Where else do people have a greater risk than at the workplace?” Justice Elena Kagan asked during arguments.

The opponents of the mandates argued that the rules were too broad.

“Of course the risk arises at the workplace, but it’s important to focus on what they’re talking about, they’re not talking about jobs where people congregate,” said Benjamin Flowers, the Ohio solicitor general who was arguing remotely after testing positive for Covid.

In recent months, the court has declined to block vaccination mandates for students at Indiana University, teachers in New York, and health care workers in Maine, Massachusetts and New York. Those were rules imposed by states, which have broader authorities known as police powers to protect public health.

But in the last term, the court said federal law did not permit the Centers for Disease Control and Prevention to impose a nationwide ban on evictions. The cases to be heard Friday involve the specific authorities of two other federal agencies.

The court will consider whether the Occupational Safety and Health Administration has the legal power to require that businesses with 100 or more employees insure that those employees are vaccinated or that unvaccinated workers wear masks and show negative Covid test results at least once a week. Employees who work at home, alone or outdoors are exempt.

States and businesses opposed to the rule sued, arguing that Congress never gave OSHA the authority to issue such a sweeping nationwide requirement. They told the Supreme Court in a flurry of legal briefs that the rule will force thousands of workers to quit and seek jobs with smaller companies to avoid the vaccination or testing requirements.

Some companies will have no choice but to lay off vaccinated workers in order to stay solvent, said one brief filed by a coalition of baking, transportation and chemical companies. “The mandate will cause immediate shortages at grocery stores, shortages of household and commercial goods, and languishing critical infrastructure failures,” the brief said.

But the Justice Department told the court that Congress gave OSHA the authority to impose emergency rules since it already determines when employees are exposed to grave danger from toxins determined to be physically harmful. Covid clearly meets that test given that it has already killed more than 800,000 people in the U.S., the government said.

OSHA estimated that the requirement will save over 6,500 lives and prevent 250,000 hospitalizations in the next six months.

The justices will also hear challenges during Friday’s argument session to a separate federal rule requiring vaccinations for health care workers who treat Medicare and Medicaid patients. Two federal appeals courts blocked enforcement in 24 states, but it’s in effect in the remaining 26.

States opposed to the requirement say the federal law gives the secretary of Health and Human Services authority to impose general health and safety rules for facilities like hospitals, but that doesn’t include the power to require employees to take a vaccine. The agency that administers Medicare and Medicaid has never before required vaccinations, they said.

Cherry County Hospital in Valentine, Nebraska, for example, projects that 50 of its 159 employees would leave their positions, according to a brief submitted by Douglas Peterson, the state’s attorney general, and Eric Schmitt, the attorney general of Missouri. Instead of improving the quality of care, the rule “threatens to create a crisis in health care facilities in rural America,” where vaccination rates among health care workers are lowest, the brief said.

But the Justice Department, in its brief submitted to the court, said the health secretary has broad authority to impose requirements necessary to protect the health and safety of patients.

“It is difficult to imagine a more paradigmatic health and safety condition than a requirement that workers at hospitals, nursing homes, and other medical facilities take the step that most effectively prevents transmission of a deadly virus to vulnerable patients,” the department said.

White House press secretary Jen Psaki on Thursday argued that the administration’s Covid requirements are vital tools in the fight against the pandemic.

“The need and the urgency for these policies is greater than ever, and we are confident in the legal authority for both policies,” Psaki said in a statement.

The third Biden vaccination requirement, for federal contractors, is on hold nationwide, blocked by order of a federal judge in Georgia.