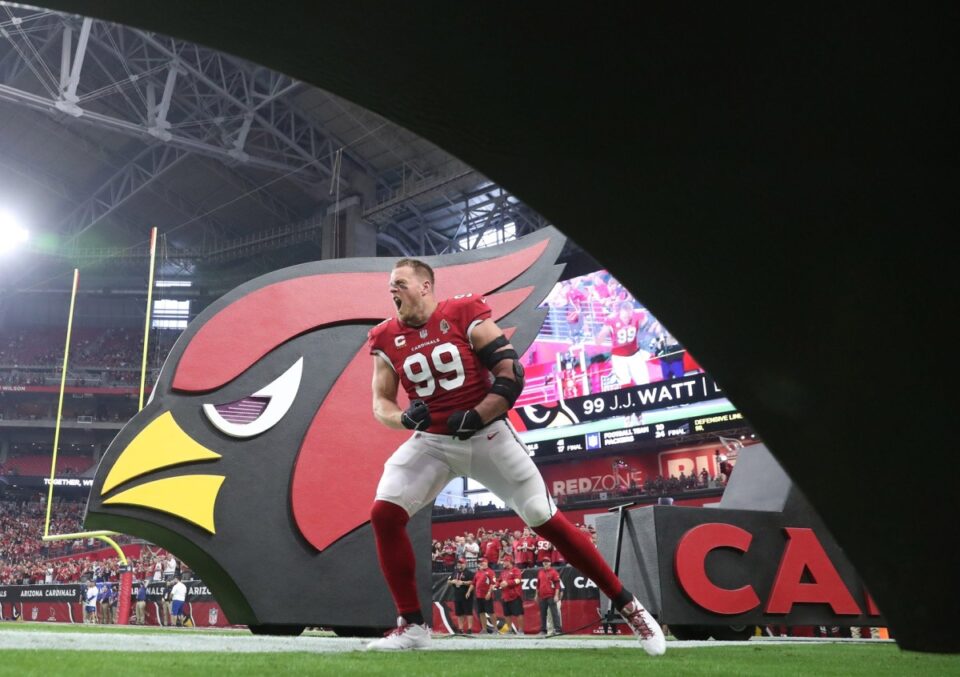 UPDATE: The Cardinals designated J.J. Watt for return from reserve/injured Friday morning. We will have more on this story after practice and following media availability with head coach Kliff Kingsbury and players.

It’s been 10 weeks since Watt suffered a dislocated shoulder, a torn labrum, a torn rotator cuff and torn biceps against the Houston Texans in late October.

Those injuries alone would have put any regular person out of work for the long run. Even the majority of players in the league would have had needed significant time off.

However, true to Watt’s Kobe-like work ethic, the door for a potential return has been left open since the beginning of the rehab process.

“I wouldn’t rule it out, I’ll say that,” Cardinals general manager Steve Keim told The Arizona Republic in late November. “I don’t know that for a fact, but I wouldn’t bet against him.”

“To me, if there is anybody who can bounce back and can do it, it’s J.J. Watt. As far as I know, there is a possibility,” said Kingsbury the week following Watt’s injury.

“I don’t want to rule that out yet. I’m not a doctor, but I did stay at a Holiday Inn Express.”

That was months ago, and the reality is, Watt is ahead of schedule in his rehab.

Watt hopped on Maanav’s Sports Talk two weeks ago and spoke about how his process was coming along.

“It’s going really well,” Watt said during the interview. “It’s going much better than we could’ve hoped or expected for it to go at this time. I’m feeling really good. I’m doing a lot of stuff to try and push it as hard as I can to smartly and safely get back as fast as I can.

“They tell me I’m done, I have to get surgery and it’s going to take four to six months. I’m sitting there and I can easily pout and easily say, ‘Woe is me, four-to-six months, I’ll do what I have to do.’ But instead I said, ‘Nah, I’m not going to accept that.’

“Many more people in the world have bigger problems than I have. So if I’m complaining, I’m doing something wrong.”

Last week, Cardinals defensive coordinator Vance Joseph echoed sentiments similar to everybody else in the building: If anybody can fully come back from this injury, it’s Watt.

“Obviously he’s here every day working out. And he looks great, just an eye view. But we’ll see if he can come back and play football. But again, if anyone can do this, it’s J.J. He’s had experience with this in the past, coming back in half the time.

“(He is) a guy so physically gifted, and he’s a hard worker also. With those two things combined, I wouldn’t put it past J.J. to come back.”

Watt should know a thing or two about working his way back from major injury.

While still with the Texans, Watt suffered a torn pectoral muscle on Oct. 27, 2019. (This year’s injury occurred on Oct. 24). In similar fashion, many thought his season was over.

However, Watt returned in time for the Texans’ playoff run.

In the first postseason game, Watt played 52 snaps (61%) and had a huge sack in the red zone to limit the Bills to a field goal. That put them ahead by 16 points  instead of a possible 20 points. The Texans came back to tie and won in overtime, 22-19.

In the game, Watt recorded two tackles, one for loss, the sack and two quarterback hits while playing 65% of his snaps in the second half and overtime.

If he is able to practice next Wednesday (Jan. 15), it would be 80 days since the injury.

Impossible? Perhaps for a man without the prestigious Watt last name.

“J.J. has been here working hard the entire time. So you know, we’d love to have him back,” said Cardinals nose tackle Corey Peters. “I’m not really sure on where he is as far as his return to play. But obviously having a guy like J.J. in our room, on the field, it would be a big bonus for us.”

The Cardinals have been very quiet in terms of Watt and his rehab, although Watt has been spotted on some occasions working off to the side during practice.

That was again the case on Thursday, although he appeared more intense than in previous sessions in which he was seen.

Is a return on the horizon? Defensive end Zach Allen couldn’t officially say.

“He’s obviously working hard and, I’ll let you guys asked him that or Kliff that,” said Allen on Wednesday. “I don’t think I have the security clearance to give that information away.”

Watt agreed with that statement.

As the Cardinals wrap up their regular season against the Seahawks on Sunday, the team will move forward into their first week of playoff preparation, their first postseason action since the 2015 season.

It’s a big moment for Arizona. and that’s precisely why Watt came to this team.

While it remains to be seen how close Watt truly is to returning, the recent intrigue displayed around the facility and capabilities previously displayed by Watt give hope that he will be able to once again pull off what many would have earlier deemed impossible.