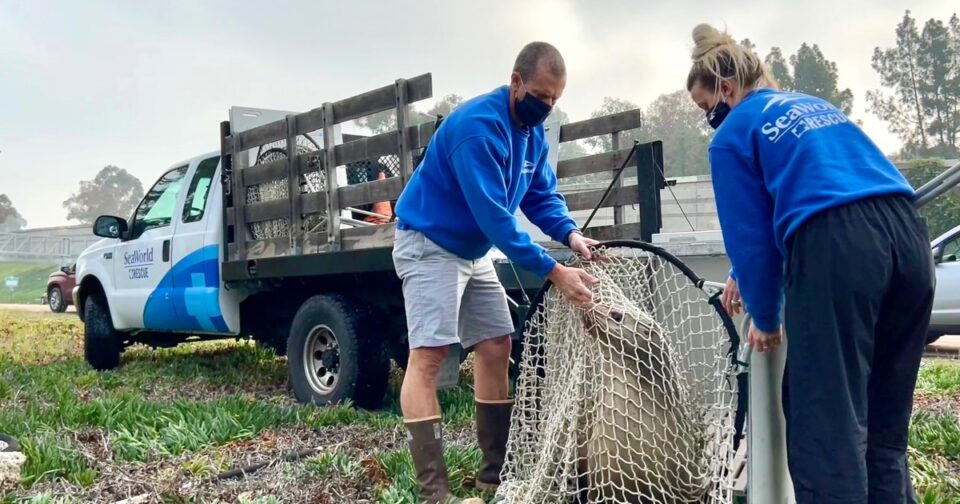 SAN DIEGO — Authorities and experts are mystified after a sea lion made its way along a busy freeway, crossed four lanes and managed to get to a median before it was safely rescued Friday morning.

Like a character from the road-bound soap opera “The Californians” sketch on “Saturday Night Live” might do, the sea lion took State Route 94 and nearly reached Interstate 805.

“Exactly how the animal ended up on the highway is still unclear,” SeaWorld San Diego said in a statement.

The park said the sea lion was on the right side of the eastbound portion of the freeway before crossing to the median. The California Highway Patrol said in a statement that motorists reported the marine mammal in eastbound lanes of Route 94, which started as a 19th-century trail to Arizona and runs through some of the city’s oldest neighborhoods, near the north-south 805 freeway.

Sea lions have been known to get comfortable at beachside businesses in the community of La Jolla, but the San Diego Bay is roughly 4 miles west from the 805.

California Highway Patrol Officer Salvador Castro said it was an unusual location for a sea lion and “an unusual incident.”

Castro said the marine mammal was about 40 feet from the roadway when rescuers got to it.

This sea lion has a history of adventurous travels, SeaWorld said, and was rescued in November near the San Diego International Airport on the bay. Last month, it was also spotted at Naval Base Point Loma, on the Mission Beach boardwalk, and near a deli adjacent to nearby Mission Bay, SeaWorld said.

Robyn Davidoff of the Sierra Club Seal Society said motorists did the right thing by allowing the sea lion to cross safely. He encouraged those who encounter marine mammals along the coast to stay at least 50 away.

“We thank the concerned citizens who blocked traffic to ensure the safety of this unusual sea lion,” Davidoff said by email.

California’s sea lions are West Coast natives protected under the federal Marine Mammal Protection Act. Their population tripled between 1975 and 2014, according to a 2018 study.

“They live in coastal waters and on beaches, docks, buoys and jetties,” the National Oceanic and Atmospheric Administration states in its species directory. “They are easily trained and intelligent and are commonly seen in zoos and aquariums. California sea lions are playful, intelligent, and very vocal (sounding like barking dogs).”

San Diego has tried to balance the marine mammals’ needs with those of coastal visitors, including by closing areas popular with tourists.

Experts have urged the city to close those coastal destinations during pupping season because human contact can be mortal for sea lion pups learning to swim.

Human awareness can be crucial further inland as well, the CHP’s Castro said, because the sea lion could have triggered a bad accident.

“This is why we stress for drivers to always look out for potential obstacles,” he said.

Jan. 6 committee indicates it will ask Pence to appear this month