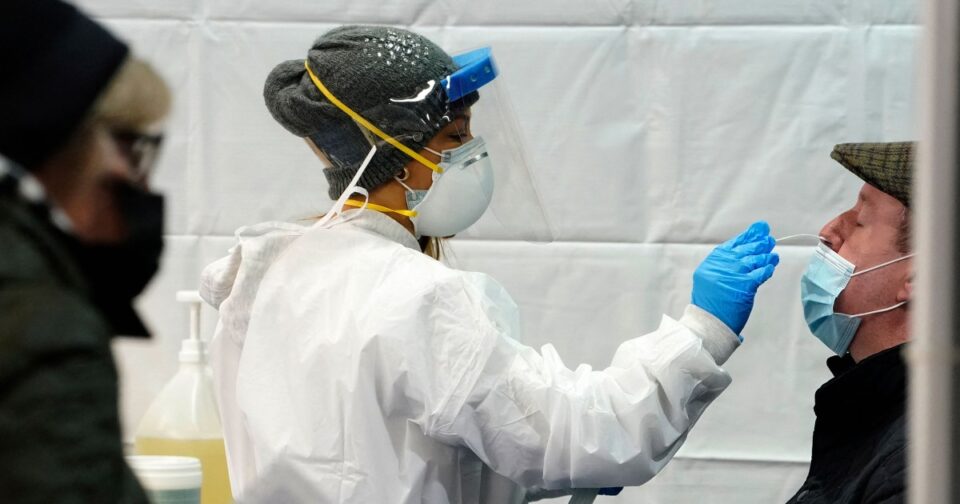 Sandra Jaramillo needed a negative Covid-19 test to return to work but was coming up empty on finding a same-day test due to overwhelming demand.

Jaramillo was experiencing headaches and a fever, and with limited options, she decided to stop at a pop-up testing site set up in the parking lot of a church near her home in San Antonio.

Under a small tent, she was told to give her driver’s license number, date of birth and email address before she was handed a swab to administer the test on herself.

That was more than a week ago, Jaramillo said, now panicked that her personal information may have been be compromised.

No one ever answers the number listed on the information sheet she was given, and the voice mailbox is full.

“At this point, it’s making me feel like I am being scammed,” Jaramillo, 32, said. “It’s been terrible. It feels like there is no choice and nowhere to turn [for a test].”

Pop-up testing sites have cropped up on street corners, in parking lots and on shopping properties across the country, but health and legal experts say many of these are unregulated and could be rife for nefarious activities like identity theft.

In the last few weeks, legislators and attorneys general in several states including Illinois, Maryland, California, Texas and Pennsylvania have said they will be investigating and introducing regulatory legislation overseeing these operations.

Numerous illegal, unapproved and unsanitary sites have been cautioned by state officials nationwide.

Outside of St. Louis, a Covid testing site set up at a mall parking lot and was asking people to provide Social Security and passport ID numbers when registering for tests. It was shut down by police, who later urged anyone who visited the site to monitor their credit reports for fraudulent activity.

At least two sites were identified inBaltimore, where state Attorney General Brian Frosh warned residents to be aware of “illegal, unlicensed pop-up COVID-19 testing sites” that were collecting personal information that could be used for identity theft.

Unsanitary sites were reported in Chicago with workers not wearing masks or gloves. Conditions were being described as a “hellhole,” nonprofit news organization Block Club Chicago reported. People who visited said they never got their results or they came in weeks after visiting.

Illinois Gov. J.B. Pritzker described the testing spots as “fly-by-night” sites that are “an enormous problem,” before vowing to crack down on them.

“With increasing demand for Covid tests, people can expect to run across fake tests online and maybe even more of the fake testing sites we saw earlier in the pandemic,” Colleen Tressler, a consumer education specialist with the Federal Trade Commission Bureau of Consumer Protection, said. “Scammers believe in supply and demand, too, so where there’s demand for tests, scammers will fake the supply.”

Since the pandemic began, the FTC has received over 650,000 reports of Covid-related fraud, identity theft and other scams, which have cost Americans over $636 million.

Marian Liu, a professor of nursing at the Center on Aging and the Life Course at Purdue University, said the pandemic has sprung all different kinds of fraud that have been based around people’s needs at the time.

“At the very beginning, people were knocking on doors, telling them, ‘We have vaccines.’ And now that we do have vaccines, I feel like the format of scams are transforming once again into something different,” Liu said.

Not all the pop-up clinics may be operating in a malicious way, Liu said, but some probably are, which is why Liu advised being cautious when thinking about going to any of these sites. Some are charging for tests, when in most cases you don’t have to pay for them.

For some, they play on the convenience of “going right around the corner,” but as Covid cases continue to soar, “they’re functioning on the fact that people are desperate,” according to Liu.

These convenient pop-ups come as several states have announced limited testing ability due to severe shortages, including Indiana, which limited rapid antigen testing to people 18 and younger and symptomatic individuals ages 50 and older. The state normally uses about 50,000 rapid tests a week, but it is now guaranteed to receive only 11,000 a week.

In Philadelphia, more than 4,000 people took Covid tests at tents throughout busy parts of the city that were run by an organization that falsely identified itself as partnering with the Federal Emergency Management Agency, The Philadelphia Inquirer reported. Some sites may have taken Social Security numbers.

“Nasal swabs were being collected by a New Jersey-based marketing agency and then shipped to a Chicago testing lab, owned by a plumber and bar owner,” the outlet reported.

Melissa Bailey, 53, was one of the thousands that visited one of these sites in the Center City district of Philadelphia.

“I have seen the city harass people for selling water on the street, so it didn’t even dawn on me that these people would be allowed to set up a tent and not be at the attention of the city in such a busy part of the city,” Bailey, whose driver’s license was scanned by the site workers, said.

Bailey said she did receive her results in the promised time, but she has been worried that her personal information might be misused.

As events are unfolding in real time, so is oversight, which means these pop-up testing sites are largely unregulated, said Allison K. Hoffman, a professor of health care law and policy at the University of Pennsylvania Carey Law School.

There are federal and state regulations that cover clinical laboratories, but “what’s tricky is that the tents that you see popping up may or may not be affiliated with a clinical lab,” she said.

The pop-ups are also not under the purview of many states’ departments of health because they are often not classified as health clinics.

”Regulators have to catch up to it, and just as the wave with omicron in the last weeks was so intense that it outpaced demand, so quickly that regulators are trying to follow what is happening in such a rapid way that I think it does leave the regulator scrambling a little bit,” she said.

But while the law catches up, Hoffman said it’s important to be careful when visiting a pop-up site.

“If they’re asking for more information than they should be, like Social Security numbers, don’t give that to them,” she said. “If they’re asking for payment, don’t give them payment because you shouldn’t be paying out of pocket at all for these tests right now. So I think that even though rightfully so, people are really eager to get tested right now, they should still be wise about whom they’re giving information.”