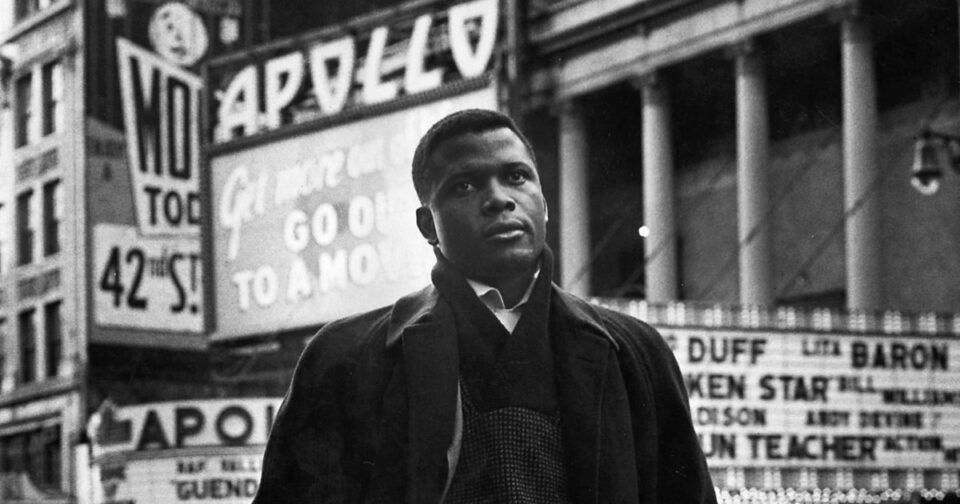 David A. Washington said he remembered the moment he became a Sidney Poitier fan.

He was about 11, watching “In the Heat of the Night” with his grandfather. He recalled the movie just being “all right” until Poitier “backhand slapped a white man,” Washington recalled.

“Once the white man slapped him and he slapped him back, with no hesitation, I was like, ‘Wow.’ I had never seen that before,” Washington said. “I remember feeling surprised, but it made me feel good that he didn’t take it. He had done many films before then. But that was the first one I saw and I was his No. 1 fan after that. I eventually saw almost all of his films.”

It was not the violence that enthralled Washington, he said. “I was growing up in Augusta, Georgia, and it was the 1960s. All I had seen in my life was Black people being put down — sometimes physically. To see Sidney Poitier do this on film, in a movie, it was saying, ‘We’re men, too, and you can’t just do anything to us.’ For me at that impressionable time in my life, it meant a lot.”

That sentiment about the power of Poitier’s career resounded around the country Friday as it mourned the death of one of America’s iconic film stars at 94. For many Black people, his films went beyond entertainment.

The roles he played during a time of discrimination and vast inequalities infused Black people, who had mostly seen demeaning roles in movies and television, with pride and hope that would ultimately lead to a change and diversity in the film industry.

“I am one of those growing up who was able to see a strong, positive Black man on the screen whose roles were powerful and sent the message that Black people matter, that we are to be respected,” sociologist Rodney Coates, a professor of critical race and ethnic studies at Miami University in Ohio, said. “It seemed every one of his movies was 30 years ahead of its time. You just did not see Black actors in lead roles, standing up for themselves, which was also standing up for Black people. And he did this at a time when they were lynching Black people, having dogs attack them, sprayed with water hoses on the streets.

“Before, there were few actors who stood up and said, ‘I am a Black man and I matter.’ That’s powerful. That’s the man we lost.”

Gerald Early, the pop culture essayist who teaches in the African and African American studies department of Washington University in St. Louis, said Poitier followed Paul Robeson, who also played strong roles as a Black actor from the 1920s through the 1940s.

“Robeson was a very important figure to Poitier, but even he was sometimes compromised in some of the roles he played,” Early said. “Poitier came along and played really dramatic, serious roles that really put the Black actor in a much better light, playing dramatic roles about race and was a dignified figure.”

Poitier’s first major role was in a 1950 film called “No Way Out” in which he played a Black doctor in a white hospital accused of malpractice by a white family.

“A huge breakthrough role, a Black man playing a doctor,” Early said. “Poitier was very careful throughout his career about picking roles that he thought would bring respect to Black people and make Black people feel good about the actors they were seeing on the screen instead of feeling ashamed.”

Poitier’s legendary career includes scenes like in “In the Heat of the Night,” when he commanded respect by telling a racist sheriff in Mississippi, “They call me Mr. Tibbs.”

“That kind of stuff was extremely important,” Early said. “And because of it Poitier was tremendously esteemed by the Black community for the kind of breakthroughs that he made as a Black actor in films.”

Natasha Tash Gray, a television executive producer and writer, said she was made aware of Poitier’s stature through her grandmother, as they watched “In the Heat of the Night” together.

Even 35 years after the film’s premiere, “she still had this feeling about him.”

“And for me, although he was way before my time,” Gray added, “I look at Sidney Poitier as someone who brought about three-dimensional characters, portraying Black people as people and not caricatures. So knowing that it’s been done during a time that was so much harder, so much worse, with so much more to lose, you believe, why can’t I do it?”

Coates added: “You can look back over Poitier’s career, and I can’t remember one role where I shook my head and said, ‘Damn. I guess he had to get paid.’ He was not about that, and that legacy is as strong as you can get.”