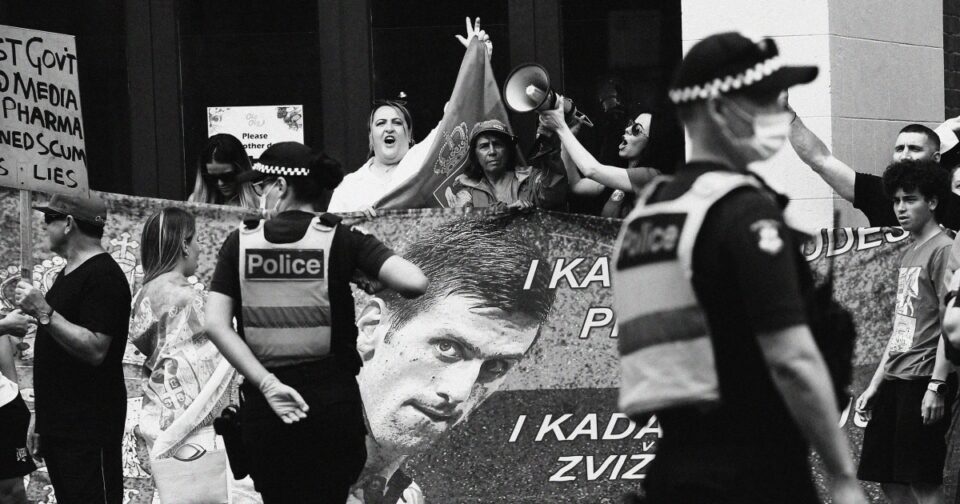 Novak Djokovic has had a strange couple of days. The world’s best tennis player has spent the past 354 weeks ranked at No. 1 and the past 48 hours held in visa limbo at one of Melbourne, Australia’s more notorious detention facilities. He now awaits deportation after his entry into Australia was denied. What began as an airport visa kerfuffle has escalated into a full-blown standoff between the Australian government and an apparent choice Djokovic has willingly made: to not get vaccinated against Covid-19.

What began as an airport visa kerfuffle has escalated into a full-blown standoff.

The question of whether Djokovic would be eligible to compete in the Australian Open has been a source of monthslong speculation. During a Facebook Q&A livestream in 2020, he revealed that he was opposed to vaccination and “wouldn’t want to be forced” to take one. Djokovic has won the championship title in Melbourne a jaw-dropping nine times, including the last three consecutive years. Were he to win this year’s tournament, he would have 21 Grand Slams, surpassing the men’s all-time record currently shared by Roger Federer and Rafael Nadal.

Rumbling began when Craig Tiley, the Australian Open’s tournament director, announced in November that all players competing in the 2022 contest would need to be fully vaccinated to play. At the time, Djokovic was mum on his status and vague in his responses when questioned about what he planned to do. He remained that way until Tuesday, when he posted an upbeat message to social media: After what Tennis Australia called “a rigorous review process,” he’d been granted a medical exemption from the vaccine by Tennis Australia and the Victoria Department of Health and was on his way to Melbourne to defend his title. The love and support poured in. So, too, did the fury.

For some Djokovic fans, the news came as proof that it was possible to “stand strong,” to beat the mandate. Djokovic had refused to compromise on his beliefs, and he’d won (the specifics of the medical condition that qualified him for the exemption were not immediately made clear). But for countless millions of Australians and global observers, the exemption was a shocking flaunt of public safety protocols granted seemingly to accommodate the extreme privilege of a celebrity. In fact, another (less titled) player, American Tennys Sandgren, opted to withdraw from the tournament because he wasn’t vaccinated and knew he didn’t meet the criteria for an exemption.

Djokovic’s victory lasted the length of his 14-hour flight from Dubai, in the United Arab Emirates, to Melbourne. Though he’d been granted entry into the tournament, his exemption was not valid for entry into Australia. Border patrol held Djokovic for questioning for eight grueling hours, and on Wednesday, Scott Morrison, the prime minister of Australia, announced that Djokovic’s visa had been canceled. “Rules are rules,” he said. Djokovic was relocated to the Park Hotel, a misnomer for the asylum-seeker and refugee detention center prone to maggots, mold and building fires.

The optics of detaining and hauling off a Serbian national are not good. Djokovic’s parents are furious and told the media he’s being “held prisoner.” (His father has taken it a touch further and likened his plight to that of Jesus.) The president of Serbia, Aleksandar Vučić, decried the “harassment” Djokovic was receiving. Beginning Thursday, hundreds of protesters took to the streets of Belgrade, vowing to “never set foot in Australia again.” Morrison was blasted for drawing such a hard line with Djokovic after botching the distribution of rapid antigen tests in Australia. All the while, Djokovic remains locked down pending Monday’s decision on his deportation appeal.

Long cut from a polarizing cloth, Djokovic is no stranger to controversy. (I have written previously about the meaning of his place in tennis history.) He has made headlines for his new age beliefs, his boldfaced ambitions to out-slam Federer and Nadal, his on-court outbursts and his tone-deaf comments about female tennis players. A perplexing study in contrast, Djokovic has also spoken out in support of Chinese tennis player Peng Shuai and against the difficult quarantine conditions some players experienced during the 2021 Australian Open.

Should Djokovic win his appeal Monday, remain in Australia and compete in the Australian Open, he’ll undoubtedly be perceived as a hero by some and a villain by others. His saga has spiraled well beyond his apparent original decision to not vaccinate and into a referendum on how the law is decided within the thorny context of conflicting country and state vaccine politics. Meanwhile, it has redrawn attention to the inhumane living conditions in many of Australia’s refugee detention centers.

If Djokovic goes home, he’ll be a martyr for his cause — robbed of the chance to defend his title, unjustly imprisoned and subjected to public ridicule over a personal choice. Either way, Djokovic has already proven he’ll never be just a tennis player.

But for now, he waits.

Caira Conner is a writer living in New York City. You can follow her on Twitter at @cairaconner.