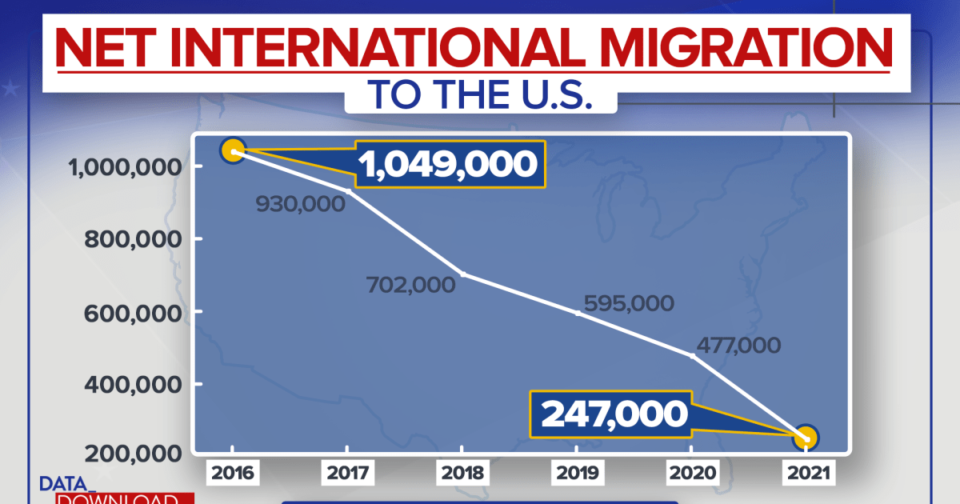 WASHINGTON — One of the biggest stories in America at the start of 2022 is what has been called the great resignation: people of all ages and occupations walking away from their jobs in the wake of the Covid-19 pandemic, leading to worker shortages.

The forces behind those shortages are complex, from fears of infection to childcare needs to worker burnout, but one factor that may be overlooked is that fewer new Americans are coming into the country. The past few years have seen a sharp drop in immigration and those declines have had real impacts on the worker pool.

The impacts can be seen by looking at the most basic measure, net international migration into the United States. According to the Census, that figure in 2021 was one-quarter what it was in 2016.

The latest figure for that population was 247,000. Five years earlier it had been more than 1 million. (These figures are gathered mid-year to mid-year so the numbers above represent figures from July 1 of one year to June 30 of the next.)

There may be some questions about that 2021 number because data collection occurred during the pandemic, when reaching survey respondents was difficult. The challenge around data collection remains the biggest unanswered question around the 2020 decennial census. Just how reliable was the tally?

But in this case the trend of declining immigration numbers began long before the pandemic even started. The net international migration figures have been falling every year since 2016. So even though the pandemic has almost certainly played a role in the drop in the last few years, policy changes also seem to have had an impact.

And all those declines since 2016 mean that there would have been millions more immigrants in the nation today if migration had kept on a steady pace.

The big story out of the 2020 Census was slow population growth. The last decade saw one of the slowest rates of growth for any decade in U.S. history. And behind that slow growth was a declining birth rate coupled with slower immigration. Add in long-time workers opting out of the workforce and you have the makings of an economic problem.

When you look at the kinds of jobs foreign-born workers tend to fill, you can see some of the industries that have taken a hit in the pandemic.

Foreign-born workers, for instance, are more likely to work in service jobs than native-born citizens. Among the foreign-born, 21 percent work in the service industry compared to 14 percent of the native-born population, according to the Bureau of Labor Statistics. Preparing and serving food, along with building and grounds maintenance, are examples of jobs where the differences between the two population groups are notable.

To be clear, that doesn’t mean that foreign-born workers dominate those fields, but remove enough immigrants from the labor pool and you are more likely going to have shortages in them. That means employers are probably going to have to look harder to find good candidates.

And then there is the question of wages.

Pay is another area to keep in mind as the number of immigrants declines. First, worker shortages tend to mean higher pay for employees, which is simple supply and demand. But beyond that, foreign-born workers tend to earn less than their native-born counterparts.

Median weekly earnings for foreign-born workers was roughly $885 a week in 2020 versus $1,000 a week for native-born workers, according to BLS.

There are several possible reasons behind those differences. Foreign-born workers tend to have lower levels of educational attainment than native-born workers and the jobs they tend to get (those service professions in particular) tend to pay less.

Regardless of the reasons, however, or whether the wage differences are fair, the reality is foreign-born workers earn less. When you remove enough of them from the labor force, you will likely see wages rise.

That’s not the only force behind rising inflation in the country — there are many things — but it plays a role. And that’s the larger point in all these data and the immigration decline.

The pandemic has caused major disruptions to the U.S. economy across a long list of areas. Many workers are re-examining the course of their lives and trying to chart new ones. Supply chain issues have wreaked havoc. And the sheer uncertainty around the virus and the “return to normal” has left businesses and investors playing a perpetual game of “let’s see what things look like next month.”

But the drop in immigration and the workers it provides to the U.S. economy have played a role. And as the stories about worker shortages continue, the political discussions around immigration may in for an adjustment in the next few election cycles.