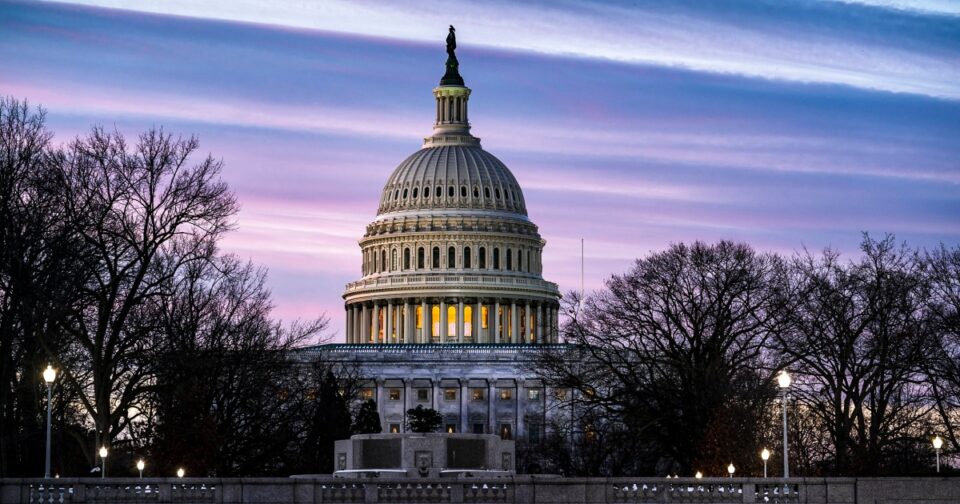 WASHINGTON — The somber Jan. 6 anniversary has renewed determination among President Joe Biden and other Democrats to act on voting rights legislation, which they say would protect future elections and the institutions of U.S. democracy.

Rep. John Yarmuth, D-Ky., became emotional on Capitol Hill as he wrestled with the impact of the deadly attack one year later. “If anyone out there doesn’t think that democracy and our way of life is hanging by a thin thread, then they’re not paying attention,” he said Thursday.

After the anniversary, Democrats appeared on Sunday programs to stress their urgency to overhaul election laws amid efforts by conservatives at the state level to restrict voting.

While many Republicans say Washington shouldn’t intervene in voting rules, House Majority Whip Jim Clyburn, D-S.C., contended on “Fox News Sunday” that election laws “should not be left up to the states,” citing the 15th Amendment, which gives Congress the power to protect the right to vote.

The House has passed two major election bills and is contemplating more. The focus is now on the Senate, where Democrats hold a 50-50 majority and Republicans are using the 60-vote filibuster rule to block legislation.

And there are fresh signs of Republican interest in modest legislation, in the form of a Senate working group.

Biden is poised to deliver a speech about voting rights Tuesday in Georgia, a historically Republican state that he narrowly won in 2020. He intends to make a “passionate case” for voting rights and to “restore” the Senate to functionality, the White House said.

Biden will also discuss the “urgent need to pass legislation to protect the constitutional right to vote and the integrity of our elections,” White House press secretary Jen Psaki told reporters. “He’ll talk about the specifics.”

Biden gave a scorching address on the Jan. 6 anniversary criticizing former President Donald Trump’s “web of lies” that the 2020 election was stolen. He also called on Washington to “step up” and protect democracy.

Last month, Biden came out for changing Senate filibuster rules in an interview with ABC News. He said he will “support making the exception of voting rights for the filibuster” — or “whatever it takes” — to bring major legislation to an up-or-down vote in the Senate.

What are congressional Democrats doing?

Senate Majority Leader Chuck Schumer, D-N.Y., has promised a vote on two major election bills — the Freedom to Vote Act and the John Lewis Voting Rights Advancement Act — aimed at beefing up voting rights and safeguarding the count. The bills have majority support to pass but lack 60 votes to defeat a filibuster.

“This chamber is not capable of functioning when one side’s strategy for legislation is inflexible, total, unthinking, unwilling to admit fact and actually making up lies to buttress the big lie, such as the federal government shouldn’t be involved in how federal offices are voted for,” Schumer said Friday.

Schumer has told colleagues to expect a vote on a change to the filibuster rule to allow the two bills to come up on a majority-vote basis, on or before Jan. 17 — Martin Luther King Jr. Day.

What would the bills do?

The Freedom to Vote Act would establish a series of guarantees across all states, including automatic voter registration, universal access to mail-in voting and establishment of Election Day as a holiday, while insulating election officials from undue partisan influence. It is an amended version of the House-passed For the People Act designed to win Manchin’s vote.

The John Lewis Voting Rights Advancement Act would require states with histories of discrimination, over a rolling 25-year basis, to pre-clear changes to their voting procedures with the Justice Department. It has passed the House.

Why are Sinema and Manchin resistant?

They support the two bills but not a rule change to pass them.

Manchin has been deeply reluctant to change filibuster rules on a party-line basis, saying last week that it was his “absolute preference” to find a bipartisan way to “protect democracy as we know it.”

But he also outlined a series of changes he would be willing to make to the filibuster, including requiring the minority to hold the floor and talk for the duration of its obstruction, as well as scrapping the 60-vote hurdle to begin debate on bills. He would also support changing the threshold to defeat a filibuster to three-fifths of those present and voting in the chamber, as opposed to 60 votes flat.

Manchin said Tuesday that he is “not going to say yes or no” until he sees the details of a new rule.

Sinema says she opposes abolishing the filibuster because she fears “repeated radical reversals in federal policy” if parties are allowed to pass legislation with majority votes, said her spokesman, John LaBombard.

Where do Republicans stand?

All 50 Senate Republicans oppose the Freedom to Vote Act. Minority Leader Mitch McConnell, R-Ky., has called it a federal election takeover and insisted that Congress should leave the issue to the states.

The only Republican who supports the John Lewis bill is Lisa Murkowski of Alaska.

Democrats have no realistic hope of winning 60 votes to clear a filibuster for either bill.

McConnell said on Thursday, the anniversary of the attack, that it has been “stunning to see some Washington Democrats try to exploit this anniversary to advance partisan policy goals that long predated this event.”

Is there hope for some bipartisan bill?

Not on voting rights — the parties are too far apart.

But last week, a glimmer of hope emerged that the Senate could agree on a narrow bill to safeguard the counting and certification of election results. Numerous Republicans, including McConnell, said they are interested in, or at least open to, changes in the 1887 Electoral Count Act.

A group of senators discussed the issue on a Zoom call Wednesday, two sources familiar with the call said.

Sinema and Manchin were on the call, as were Sens. Susan Collins, R-Maine, Thom Tillis, R-N.C., Jeanne Shaheen, D-N.H., and Roger Wicker, R-Miss., said one source, who added that the call included a “long agenda” and that the group discussed clarifying the vice president’s role in counting the electoral votes

It’s unclear whether the talks will produce viable legislation. So far, McConnell is taking an approach similar to the one he took on infrastructure: watching from a distance and giving his members space to talk to Democrats and craft a workable product, a GOP aide said.