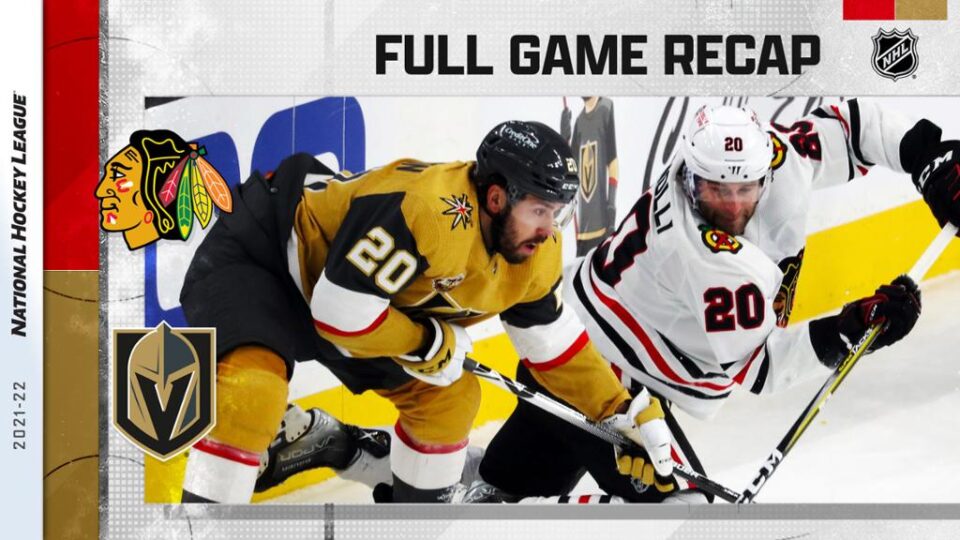 LAS VEGAS — Marc-Andre Fleury made 30 saves in his return to Las Vegas, and the Chicago Blackhawks defeated the Vegas Golden Knights 2-1 at T-Mobile Arena on Saturday.

“It was weird,” Fleury said. “Obviously, they’ve got a few new guys that I haven’t practiced with, but so many guys I played hockey with every day pretty much for the past four years, so it’s sometimes a little bit of a mind game because you know what they like to do. They know that I know.

Fleury received a video tribute before the game. He said he spoke with former Golden Knights teammate Ryan Reaves, who returned to Las Vegas for the first time Thursday since being traded to the New York Rangers, about the emotion of that moment.

“It was good to get it out of the way quick,” Fleury said. “Obviously, it’s just a few images and videos, but a lot of memories come through seeing that. I was really fortunate to have a great time here in Vegas.”

Ben Hutton scored his first goal with the Golden Knights, and Robin Lehner made 19 saves.

“It stings, obviously. We wanted the two points,” Hutton said. “We didn’t get the job done. I thought ‘Lenny’ made some big saves, but we’ve got to score a couple more if we want to win some games.”

“[Fleury] was great. I thought both goalies were really good,” Golden Knights coach Peter DeBoer said. “Obviously, a big night for ‘Flower’ and a big night for their team. This game couldn’t have set up much worse for us with them losing [6-4 at the Arizona Coyotes on Thursday] … You knew their group was going to play hard for him. You have to give them credit, starting with him.”

Hutton gave Vegas a 1-0 lead at 5:17 of the first period following a face-off from the left circle.

Stillman gave the Blackhawks a 2-1 lead at 14:21 after his shot deflected off Vegas forward Brett Howden’s leg and redirected to Lehner’s stick side.

“We kept them to the outside and we forced them to make lateral plays instead of shooting, and we were blocking some shots,” Blackhawks coach Derek King said. “Guys were getting in lanes, forcing bad pucks. … When we do that, we give ourselves a chance.”

Fleury made a diving, shoulder save on Golden Knights forward Evgenii Dadonov with 1:01 remaining in the third period while Vegas had an extra attacker.

Flowers were thrown onto the ice as the game ended, and the fans gave Fleury a standing ovation. He stayed on the ice to acknowledge them.

“I just wanted to say thanks, obviously thank you to the fans for an amazing four years,” Fleury said. “They were awesome. Glad I got to say my thanks.”

NOTES: Fleury has defeated all 32 NHL teams. … Fleury played his 906th NHL game, tying Glenn Hall for seventh-most by a goalie in NHL history. Next is Curtis Joseph (943). … Golden Knights forward William Carrier sustained an upper-body injury in the first period. There was no update. … It was Hutton’s first goal since March 8 as a member of the Anaheim Ducks against the Los Angeles Kings. He signed a one-year contract with Vegas on Oct. 28. … Blackhawks forward Brett Connolly had three shots on goal and two hits in 12:23 in his return following a four-game suspension for interference against Dallas Stars forward Tanner Kero on Dec. 18. … Chicago forward Patrick Kane has six assists during a four-game assist streak. … Stillman had not scored a goal since May 6, in a 2-1 win at the Carolina Hurricanes.

Chael Sonnen scolds Tyson Fury for “silly” challenge to Francis Ngannou: “Where is the pride within your sport?”