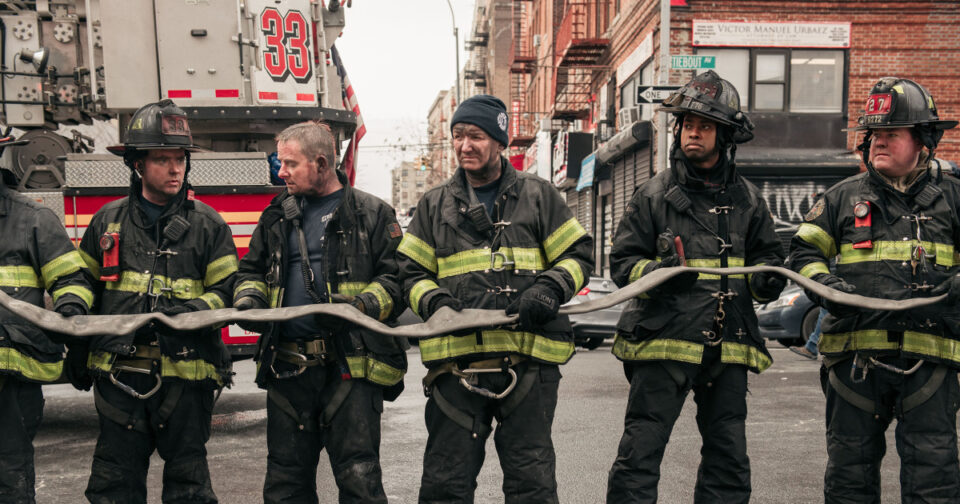 The late-morning fire quickly expanded because a door in the two-level second-floor unit where the blaze started was either left open or did not automatically close after residents fled, he said.

“The marshals have determined through physical evidence, through firsthand accounts from the residents, that this fire started in a bedroom in a portable electric heater,” Nigro said at an evening news conference.

The heater, he said, was used to supplement the building’s heat, which he indicated was working at the time. The functionality of fire alarms, however, was under investigation.

The blaze grew to five alarms and sent at least 30 survivors to the hospital. A second open door most likely allowed deadly smoke to spread throughout the building, Nigro said.

Firefighters and residents quickly faced deadly levels of smoke, with firefighters running out of oxygen as they made rescues in the 19-story structure, which has 120 units, Nigro said.

“They ran out of air, many of our members, and they continued working to get as many people out as they could,” he said.

Many of the residents who died or who were taken to hospitals were likely to have been affected by smoke, he said. “I think some of them could not escape because of the volume of smoke,” he said.

About 200 firefighters responded to the blaze on East 181st Street, the fire department said. Authorities were called to the scene at about 11 a.m. and managed to contain the flames at around 1 p.m., NBC New York reported.

Asked earlier about the rumors that residents may have jumped out of windows, Nigro said it was possible that some “might have fallen from the building” trying to get onto ladders placed by firefighters. He said he had not heard reports of anyone’s having jumped before firefighters arrived.

“The last time we had a loss of life that may be this horrific was at a fire which was over 30 years ago, also here in the Bronx,” Nigro said.

He seemed to be referring to the 1990 Happy Land social club fire, which killed 87 people. A man who worked at the club’s coat check-in, angry at having been spurned by his former girlfriend, set the club on fire after a heated argument.

The fire department initially reported that many, if not most, of those who were hospitalized had life-threatening conditions.

The city’s new mayor, Eric Adams, was at the scene Sunday afternoon to be briefed by officials. He said the fire will bring “pain and despair” to New York.

“This is going to be one of the worst fires we have witnessed here in modern times in the city of New York,” Adams said at a briefing.

New York Gov. Kathy Hochul tweeted that she was “horrified.”

“My heart is with the loved ones of all those we’ve tragically lost, all of those impacted and with our heroic  @FDNY firefighters,” Hochul wrote. “The entire State of New York stands with New York City.“

The leaders said many of the residents were Muslims from Gambia. Hochul said at the evening news conference that a victims’ compensation fund would help survivors find housing and begin recovery. A city emergency management official said the Red Cross was standing by to register displaced residents and provide immediate housing at hotels.

New York City Department of Buildings spokesman Andrew Rudansky said late Sunday that multiple apartments on the third floor had been damaged by fire and would have to remain vacated. A preliminary assessment found the rest of the building was “stable,” he said in a statement.

“The fire did not affect the structural integrity of the building,” Rudansky said.

Speaking at the news conference, Senate Majority Leader Chuck Schumer, D-N.Y., described many of the dead as “immigrants working to drive that ladder up, and their lives snuffed out.”

Nigro said the building, which was built in 1972 under the auspices of the federal government, did not have fire escapes, only internal stairwells. Because of its federal origins, he said, “it was potentially built outside the New York City fire code.”

A spokesperson for Bronx Park Phase III Preservation LLC, owner of the building, said Sunday night that its alarm system operated successfully during the blaze.

“There are no known issues with the smoke alarms and it appears the fire alarm system worked as designed,” the spokesperson said by email.

The owner, described by the spokesperson as a joint venture of three investor groups, also released a statement that expressed empathy for the fire victims and those displaced, which it said it would accommodate with “longer term housing” if needed.

“We are devastated by the unimaginable loss of life caused by this profound tragedy,” it said. “We are cooperating fully with the Fire Department and other city agencies as they investigate its cause, and we are doing all we can to assist our residents.”

Recalling the terrifying experience, some residents told NBC New York that they were also taken out of the building by firefighters on ladders. Karen Dejesus, who said she lives on the third floor, was making breakfast when she began to see smoke and heard cries for help.

“We just hovered in the back room … and next thing we know we see flames coming out the back windows and stuff,” she said. “We smelling the smoke and the next thing we know, the whole upstairs and my apartment is black and the fire department breaking in the door to come get us. We had to climb out the window and everything.”

Dejesus called the experience “so scary” but said she and her family, including a 3-year-old child, were safely evacuated.

The fire comes just days after a rowhouse in Philadelphia went up in flames, killing 12 people, eight of whom were children. Officials said none of the four battery-operated smoke detectors were working at the time.