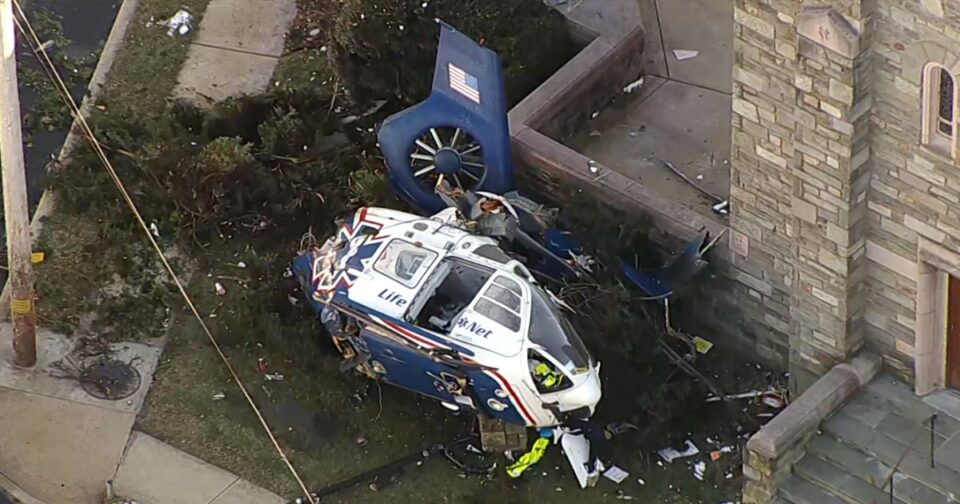 A medical helicopter crashed just outside of Philadelphia on Tuesday, but in an “absolute miracle,” all people on board  — including an infant — survived, authorities said.

The craft was headed to Children’s Hospital of Philadelphia when it encountered difficulties at about 1 p.m. EST and crash landed in the Drexel Hill neighborhood of Upper Darby, officials said.

“It’s an absolute miracle, what you see behind,” Upper Darby Police Superintendent Timothy Bernhardt told reporters at the scene of the crash.

The four people inside the helicopter included the pilot, co-pilot, nurse and infant, officials said.

The flight originated out of state and neighbors had called 911 before the crash, reporting a “helicopter in distress,” according to Bernhardt.

“There’s no debris, no wires down, no trees,” Bernhardt said. “How that pilot was able to get that … and all four of them were able get themselves out of the helicopter, with assistance from the police and fire department.”

The child was eventually transported to Children’s Hospital of Philadelphia, which is about 7 miles away.

Firefighters immediately surrounded the downed craft to prevent fuel from leaking into a drain or creating a flammable hazard.

Wreckage of the helicopter was just feet away from the entrance of the Drexel Hill United Methodist Church at 600 Burmont Road.

“It is a miracle, it’s an absolute miracle on Burmont Road. That’s what it is,” Bernhardt said.

The National Transportation Safety Board will investigate the cause of Tuesday’s crash.

Witnesses reported the distressed helicopter looking for a clear spot to bring down the craft as safely as possible.

“I can’t wait to meet this gentleman and shake his hand for getting this plane down, the helicopter, the way he did,” Bernhardt said.

Senators unveil legislation to crack down on bear poaching