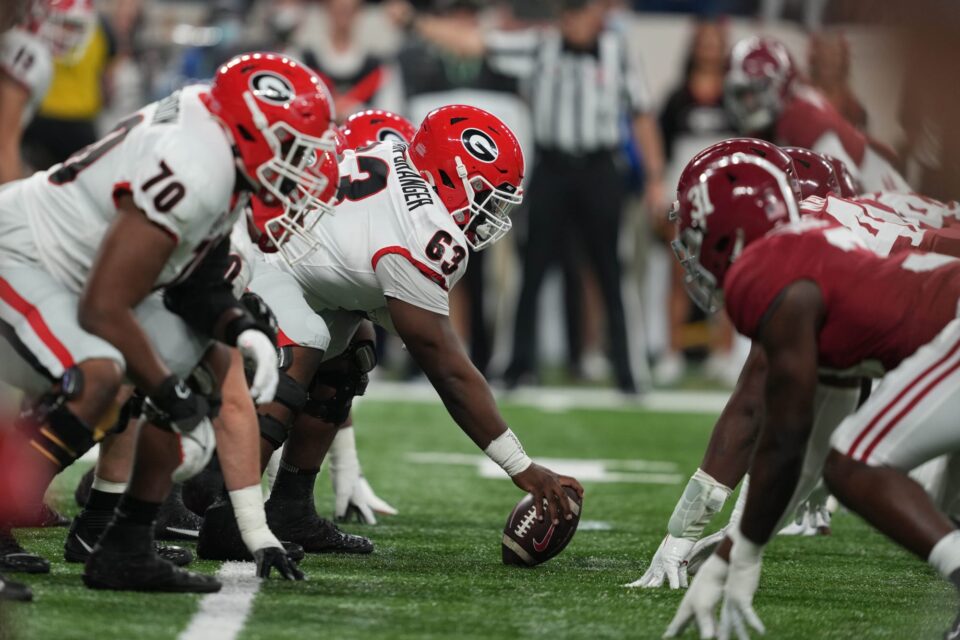 Jan 10, 2022; Indianapolis, IN, USA; A general view of the line of scrimmage during the first quarter of the 2022 CFP college football national championship game between the Alabama Crimson Tide and the Georgia Bulldogs at Lucas Oil Stadium. Mandatory Credit: Kirby Lee-USA TODAY Sports

The Alabama Crimson Tide lead the Georgia Bulldogs 9-6 at halftime of the 2022 National Championship Game.

The 2022 National Championship Game just so happens to be the most anticipated rematch between the Alabama Crimson Tide and Georgia Bulldogs. The Crimson Tide handed the Bulldogs their first loss of the season in the SEC Championship Game. Now, Georgia is looking to get their revenge on the grandest stage of the college football season.

Alabama vs. Georgia halftime score and statsAlabama got on the board first on their opening drive after with a 37-yard field goal by Will Reichard. Despite a deep pass from Stetson Bennett to George Pickens in the second quarter, Georgia would settle for a 24-yard field goal by Jack Podlesny to tie things up at three points apiece.

The Crimson Tide did take a 6-3 lead after a 45-yard field goal by Reichard. Even with a 62-yard catch-and-run by tight end Cameron Latu to set Alabama up in the red zone, the Crimson Tide offense stalled out, but extended their lead to 9-3 on another successful kick by Reichard. Georgia cut into their lead 9-6 on a 49-yard kick by Podlesny.

Bennett threw for 127 yards while completing 11-of-17 throws. Running back Zamir White ran for 22 yards on five carries. Pickens leads the Bulldogs in receiving yards with 52 yards on one catch.

Building Bitcoin Communities From The Ground Up In The Philippines