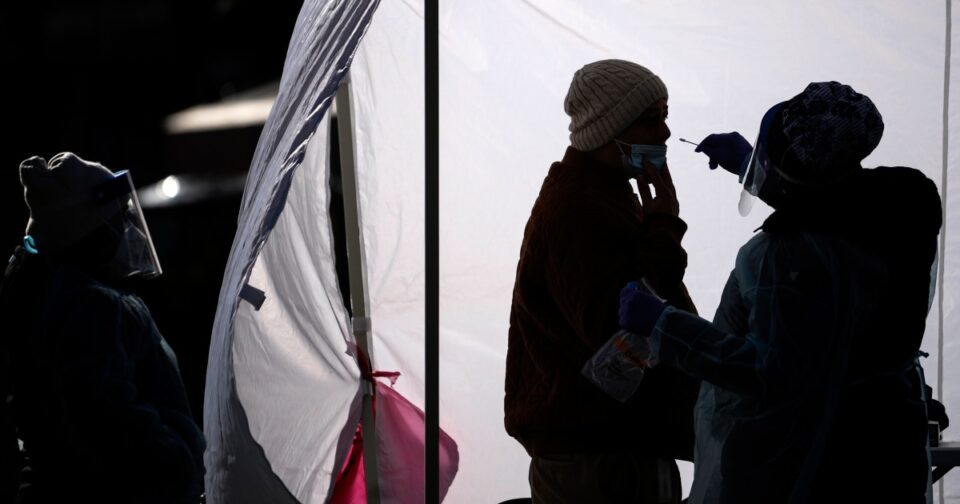 He calls it the “pandemic of the unvaccinated,” but that’s only confused boosted Americans home sick with the omicron variant.

And the administration hasn’t changed its guidance to urge high-filtration masks despite calls from the medical community, while recent isolation guidance has only added to the uncertainty.

The White House’s stay-the-course strategy on Covid is increasingly colliding with the realities of a roaring pandemic that is forcing schools and businesses to close.

A half dozen former health policy makers, including some members of Biden’s transition team, told NBC News the Biden administration needs an urgent reset on its Covid strategy or the White House could rapidly lose credibility with the public.

“Biden was elected president, in large part, based on a message of ‘I’m competent, I’m capable, I will tell you the truth and I will get a handle on Covid in a way my predecessor could not and refused to do,’ and that continues to be the number-one issue for most people,” said Kathleen Sebelius, who served as Health and Human Services secretary in the Obama administration.

While praising the administration for quickly being able to make the vaccines widely available, she said that Americans’ “lives are still pretty chaotic and kind of messy and when they thought they were getting out of this they are back in it.”

She added, “I do think it’s about competence and capability and telling the truth and using all of the tools that are at the president’s disposal.”

As the omicron variant began to metastasize across the country last month, Biden and his top health officials largely focused on urging people to get vaccinations and boosters, and on prescribing a mask indoors while greenlighting holiday gatherings for those fully vaccinated.

He has called on schools and businesses to remain open with a strategy that emphasized testing, reassured vaccinated Americans that they are unlikely to get severely ill if they become infected, and promised that the federal government is ready to address testing shortages and overrun hospitals.

But the rapid spread of the variant has created a level of disruption in many Americans’ lives not seen since the early days of the pandemic. Staffing shortages have forced schools and businesses to close and have led to absences in police and fire departments with large numbers of sick first-responders. Airlines have canceled thousands of flights because of staffing shortages, transit systems have shut down bus and subway routes, and the surge in cases has once again crippled the cruise industry.

The demand for testing has overwhelmed the country’s capacity in places that are hardest hit, creating long lines and delaying results for days.

At-home tests are still in short supply, and the administration was widely criticized last month for what appeared to be confusing recommendations for those infected as cases soared.

The isolation period was shortened to five days rather than 10 and the Centers for Disease Control and Prevention did not recommend a negative test before leaving isolation after the shortened period — concerning some public health experts and prompting criticism from the American Medical Association, which said in a statement that “a dearth of tests at the moment does not justify omitting a testing requirement to exit a now shortened isolation.”

“In terms of the communication and the trust in the CDC, it feels like we have gone backwards,” said Leana Wen, a former Baltimore health commissioner.

Wen said some of the decisions and the fallout reminded her of the early days of the pandemic response under the Trump administration.

The health experts said that at least part of a new way of communicating should include preparing Americans to accept Covid as endemic, while still attempting to reduce the most disruptive impacts of the virus, like keeping people out of the hospital and reducing serious or fatal illness by promoting vaccinations.

“There’s agreement that the messaging has to be better and that it would be important to be simpler for people and more targeted towards what people need and action guided,” said Ezekiel Emanuel, a key member of Biden’s transition team and a former health policy adviser to the Obama administration. “I think we just need a clear message so people know what the ‘to do’ is.”

They also say Biden needs to acknowledge the extent of testing shortages and ramp up a remedy to it.

Biden has promised to send 500 million free at-home Covid tests to Americans, with the first batch going out this month, but it will take months for the administration to be able to procure and ship that many tests, based on production estimates from the test makers. On Monday, the administration announced it would mandate that insurance companies and group health plans cover the cost of at-home Covid-19 tests starting Jan. 15 and held up the move as another way it is attempting to improve testing access.

“There has to be an admission at the federal level [about] what is not going well now and frankly, we have a testing mess,” Sebelius added. “While I think the president stepped up in the beginning to purchase the test kits and get them to people, even mail them to people, we’re late to this game for a whole variety of reasons. The United States has not done well on testing since March of 2020. That’s a problem and I think it needs to be said out loud that it’s a problem because that’s what a lot of people are experiencing every day.”

In an acknowledgement of the need to improve its messaging, the CDC director, Dr. Rochelle Walensky, said Friday she would begin holding regular news briefings with other CDC officials, apart from the weekly White House Covid briefings that typically last for 30 minutes and leave time for only a handful of questions. It’s a move former administration officials had been urging.

She spent that first briefing Friday detailing the thinking behind the agency’s isolation and testing guidelines released last month.

“One of the things that was very distressing was that the CDC had not really explained itself directly to the American public,” former Obama administration CDC director Thomas Frieden said, adding he was very encouraged the CDC would begin holding more of its own briefings going forward. “That’s a problem. In past outbreaks, the CDC was regularly briefing, explaining the science and explaining how the guidance might apply.”

Since the arrival of the omicron variant in early December, the White House has increased the time Biden has spent addressing Covid publicly, stressing the need for vaccinations and the higher risk of infection, even to those who are vaccinated. The administration has also ramped up its support to states, sending thousands of federal personnel to hospitals along with medical supplies and equipment.

But the president hasn’t pushed for stricter measures, like a return to remote learning or a nationwide lockdown, because officials believe they have the tools with vaccines, masks, and testing to manage the pandemic, administration officials say.

Psaki said the president continues to refer to Covid as the “pandemic of the unvaccinated” because CDC data shows that those who are unvaccinated are significantly more likely to be hospitalized or die if they are infected then those who have been vaccinated.

The White House referred requests for comment to the Department of Health and Human Services, which said in a statement Monday that the administration has “led with transparency, and data – no matter how complex the science is amid a once in a generation pandemic – and have focused squarely on getting Americans the information they need to stay safe and protect others.”

“Importantly, President Biden has not wavered from his core campaign promise that he would let the science lead, even as we face the challenges posed by an ever-evolving pandemic,” HHS spokeswoman Kirsten Allen said, in part.

One aspect of the guidance that has also been confusing, health policy leaders said, has to do with masks. Last month, Biden and his top Covid advisers, including chief medical adviser Dr. Anthony Fauci and Walensky, gathered for a video call with governors. The group sat together in the type of high-filtration masks they haven’t been urging the public to wear.

The masks, referred to as N95 or KN95, have been strongly recommended by public health experts outside the White House who say cloth and ordinary paper masks don’t provide enough protection against the omicron variant. But the CDC’s website still recommends cloth and disposable paper masks, and officials haven’t made any specific recommendation for the public to switch to the more protective face coverings.

“I cannot imagine that the CDC or anyone would disagree that at this point in the pandemic with omicron being so contagious, and the virus being omnipresent, that a cloth mask is still the way to go,” said Wen. “There are a lot of people who are still walking around in cloth masks thinking that they are protected and they’re getting infected. That is just unconscionable.”

The White House said it is following the CDC’s guidance on masks, which does not advise wearing N95 masks but rather advises people to wear a “well-fitting mask” that could include ones made of cloth. A spokesman said Biden has been explicit and consistent in urging mask wearing, including in schools.

On the political front, Biden could be better off acknowledging the virus is here to stay, despite his repeated promises as a candidate that he would “shut down the virus,” said Paul Maslin, a Democratic pollster.

“Is Covid ever going to be the great success Biden or his people or any Democrats had hoped it would be? The answer’s no,” Maslin said. “He’s lost the opportunity of making it a great success. But there are definitely going to be plenty of other things he’s going to be judged by.”

Mexican president says he has Covid-19 for second time