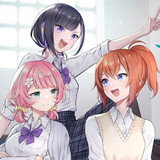 NBCUniversal Entertainment Japan and Hifumi, Inc. have teamed up to create a new project “VOISCAPE.” This project aims to express “acting and songs” in the form of a picture drama.

Seiji Mizushima, an acclaimed anime director who is known for his directorial works for Fullmetal Alchemist, Mobile Suit Gundam 00, and many other works, joins the project as executive producer of its drama part and music. “It’s been two years since we first talked about how we wanted to do something together as a team with Hifumi,” he says, “It’s a strange picture drama that took two years to develop and mature. We hope you will enjoy the performances of the three actresses. We have already decided the ending, but will we get there? Please look forward to it!”

The project’s first installment “Mada, Sekai no Hate jyanai.” (It’s not the end of the world yet.) features three young female voice actresses – Yuki Nakashima (Lisa Imai in BanG Dream!) as Michiru Iimori, Sayumi Suzushiro (Uruka Takemoto in We Never Learn: BOKUBEN) as Shiori Nakazawa, and Yuko Ono (Nemesis in Infinite Dendrogram) as Nozomi Ota. It tells a comedy story about three high school girls who live their lives laughing at the “sparkle of a moment” of everyday life.

The three girls’ voices are revealed in a teaser PV posted today:

These $99 Abercrombie Jeans Have Gone Viral on TikTok, and We Can Totally See Why