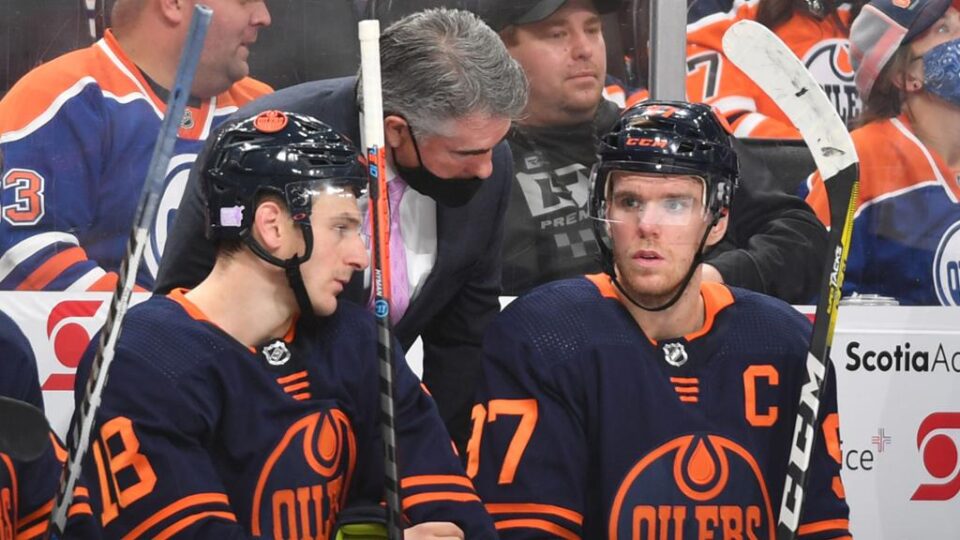 “If we can win a couple of games, [we’ll] get our swagger back a little bit and feel good about ourselves and start to ride the wave. Right now it’s going downhill in the wrong direction and we’ve got to turn this thing around. I believe we’re going to get going here.”

Holland, who was named Oilers GM prior to the 2019-20 season, has never changed a coach in-season during a managerial career that started with Detroit Red Wings in 1997.

“I don’t believe in it, I guess, but I also understand there are times when possibly it needs to be done or it should be done,” he said.

“On Dec. 2, we were first place in the NHL overall. We’ve had a bad five weeks. There’s been seven coaches here in 10 years. You can’t just keep whipping through coaches.”

Tippett is 90-58-13 with Edmonton and coached the Oilers to the postseason each of the past two seasons. Edmonton lost in four games to the Chicago Blackhawks in the best-of-5 Stanley Cup Qualifiers in 2020 and was swept by the Winnipeg Jets in the best-of-7 Stanley Cup First Round last season.

The Oilers have allowed the first goal in 24 of 34 games this season, most in the NHL.

The struggles have not convinced Holland that the Oilers need to mortgage the future to right the present, even with the presence of two of the best players in the NHL, forwards Connor McDavid and Leon Draissaitl.

Holland said sacrificing prospects or high draft picks for a rental player is not the most conducive path to shoring up Edmonton’s foundation for success.

“I wouldn’t do that,” Holland said. “I think the answer’s in that locker room. Why would I trade a first-round pick or one of our top prospects to have somebody give us a little bit of a boost and then next year we have a press conference and you’re asking me about more secondary scoring again, or more depth?”

“Now, I understand Connor’s 25 (years old) and Leon’s 26, and would I trade something if it’s a hockey trade and you bring in somebody and he’s [here] this year and beyond? That’s a different story. But if your question is to just trade some Grade A prospect to give a little bit of a boost and a bump so we can have another press conference next week, and then that guy goes on and flourishes in another organization somewhere else for five, six, seven, eight, 10 years, and we’re back to the market next year because that person leaves, I’m not doing that.”

Edmonton plays the Ottawa Senators on Saturday, its first game since a 4-2 loss to the Toronto Maple Leafs on Jan. 5. Its next four games were postponed because of attendance restrictions in Canada cities.

“I’m not sure where we’re at because we’ve been in such extremes the first 21 games versus the last 13,” Holland said. “But I believe we have a good team. …

“I understand that we’re in pro hockey and we’re judged on wins and losses and we haven’t won enough, but I believe [in] the coaching staff, the team is playing hard, they’re competing every night. We’ve got a bit of break here and I hopefully am going to talk to [Tippett] and a few of the players, make a couple of tweaks, (hopefully we) get people out of COVID, get our team back and let’s see how we can do.”

Holland said he’s been having conversations with GMs but isn’t sure a trade would be the path to putting the Oilers back on track.

“I am working the phones, but for right now, today, the solution has to be in that locker room,” Holland said. “We’re better than what we’ve been playing, I believe that, and I don’t know that I could go out and make some big trade to kind of turn things around, but I am talking to teams.”

Michel Pereira vs. Andre Fialho now set for UFC 270 due to COVID-19 protocols