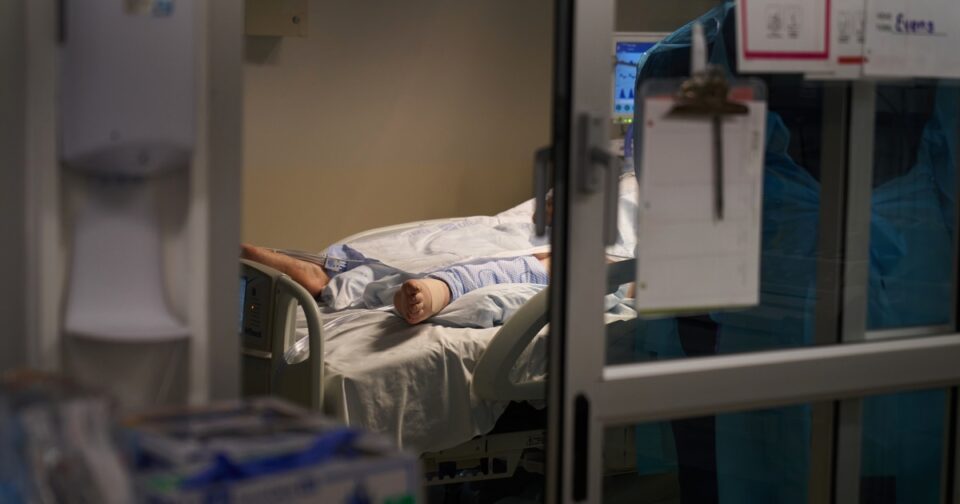 Omicron, the latest variant of Covid-19, is crushing health care workers already under strain from nearly two years of grappling with a pandemic — a situation that could result in “irreversible patient impacts,” experts say.

“With omicron, the community spread is so great that this issue alone is going to present real challenges over the next couple of weeks as this peaks,” said Dan Steingart, an analyst and vice president at Moody’s.

The pandemic exacerbated existing issues within the health care industry but, as new strains have emerged, the pressure being applied on this workforce is only mounting.

All of this will affect quality of care for patients and lead to greater medical errors and decreased patient satisfaction, according to Natalie Schibell, senior analyst in Forrester’s health care unit.

Health care organizations must manage worker flight and the shift to remote care such as telehealth and at-home care, Schibell said. In order to do this, providers must get more “comfortable with new care settings, establish revenue streams, and remove barriers” preventing consumers from adopting new technologies that allow them to engage more actively in their own care.

An investor outlook report from Moody’s notes that hospitals benefited from grants in the Coronavirus Aid, Relief and Economic Security (CARES) Act for the first two years of the pandemic. However, most of the earmarked funds have been dispensed, and it’s unlikely that the government will provide additional funds to turn things around this year.

The report points to three factors that could improve the outlook for the health care industry in 2022: greater Covid vaccination rates, the success of investment markets and improvements in hospitals’ reimbursement rates.

One thing is clear: The pandemic is overburdening the system, and real improvements are being hampered in the interim.

One doctor in Pennsylvania, who asked to remain unnamed for fear of retribution, said: “It’s bad. I’m exhausted. Everyone is concerned it will be a repeat of 2020. I just hope that doesn’t happen.”

Everyone is concerned it will be a repeat of 2020. I just hope that doesn’t happen.

“We are all so tired,” said another doctor, based in Chicago, who also requested anonymity. “And that’s even before this recent wave.”

“It has exploded. We’re in a crisis, red-tier situation again,” said Denise Duncan, a registered nurse and president of the United Nurses Associations of California/Union of Health Care Professionals.

The increase in hospitalizations and positive cases comes as the industry experiences an ongoing worker shortage of doctors, nurses and other health care providers, which is only getting worse. Schibell said health care workers are dropping out in record numbers.

A report from the data intelligence company Morning Consult found that 18 percent of health care workers, nearly 1 in 5, have quit their job since February 2020, and another 12 percent have been laid off. According to the survey of 1,000 health care workers, the biggest drivers of the exodus were the pandemic, burnout, and insufficient pay.

“Everyone is quitting, the nurses especially, and a lot of doctors are retiring,” said the physician in Pennsylvania. “I’m going back into fellowship because as a hospitalist everything is your responsibility and when patients come in and you do everything and they still die, it’s frustrating and then you have to explain to families.”

In some instances, even highly paid travel nurses don’t show up.

Duncan, the nurses’ association president, said the shortage is severely affecting nurse staffing. She said she’s often unable to backfill absent workers because there’s nowhere to pull from. There’s even a lack of traveling nurses, according to Duncan, who has had instances where half of the contracted travelers just don’t show up. In some cases, hospitals are being forced to bring in nurses from overseas.

“It’s pretty bad,” Steingart said. “The nursing shortage is the worst that I’ve seen in my 15 years doing this.”

By all accounts, the pandemic is making the situation worse across all health care roles. The most recent jobs report, released Friday by the Bureau of Labor Statistics, showed that hospitals lost jobs for the second straight month, down 5,100 for the month of December. Overall, employment in health care is down about 400,000 jobs from February 2020, according to the BLS data.

“Operating cash flow will decline by 2-9 percent,” according to the investor outlook report from Moody’s. “Staffing shortages will increase labor costs and be the main driver of higher expenses.”’

To address the shortages, many hospitals have begun offering higher hazard pay to incentivize workers. The doctor in Pennsylvania said he knew physicians who were being offered $325 an hour to work in overwhelmed locations. The pay incentives are even trickling down to residents and interns.

“What I’m hearing from a lot of my friends across the country is that they are offering financial incentives for residents to come in on their off days to help with the surge,” said a doctor in Seattle, who also requested anonymity. “At one hospital, they’re paying interns $150 per day to come in on off days to help.”

By the end of 2021, half of hospitals could have negative margins.

That’s problematic because as pay rises, it takes a bigger toll on hospitals’ profitability, and there’s a limit to how how high hospitals can increase prices to offset these rising costs because many rely on government reimbursement sources, such as Medicare and Medicaid. The pandemic also prompted many hospitals to limit more lucrative elective procedures, which further exacerbated revenue losses.

By the end of 2021, half of hospitals could have negative margins, the Forrester report predicted. That’s up significantly from pre-pandemic levels, which were at 25 percent.

With the disease spreading and positive cases surging, doctors and nurses are again finding themselves in a tenuous position where they’re also contracting Covid even as they work to treat patients. As more providers test positive, some hospitals have had to take drastic measures.

An emergency department in Downey, California, was forced to turn away ambulances with patients last week because it was overloaded. Earlier this month, a Fort Lauderdale hospital temporarily closed its maternity ward because of staff shortages related to Covid-19.

“We are overrun. State by state by state, there are limited ICU beds available, there are limited hospital beds available and the emergency rooms are stock full,” Janis Orlowski, a physician and chief health care officer for the Association of American Medical Colleges, said in a press briefing this month. “At any period of time, we’ve got about 5-7 percent of staff members who are ill with an omicron virus.”

One hospital’s emergency unit had 40 people out sick — a significant toll for any department.

The doctor in Chicago, who is fully vaccinated, recently tested positive and was forced to quarantine. She missed multiple shifts and, while her symptoms were mild, she said she had one day that was really bad.

“We shut down elective cases because of too many infections among the staff,” said another doctor in New York City, who also requested anonymity.

Duncan said she knew of an emergency unit that had 40 people out sick — a significant toll for any department. She said the diversions and issues are related to both a lack of beds and a lack of staff, which is concerning.

“We have doctors out sick, we have pharmacists out sick, the community is sick,” she said. “It’s a terrible situation to be in again, but it’s different from before. It was one thing when we didn’t have a vaccine. Now, I worry that the community has put our health care community at risk because of a failure to vaccinate.”