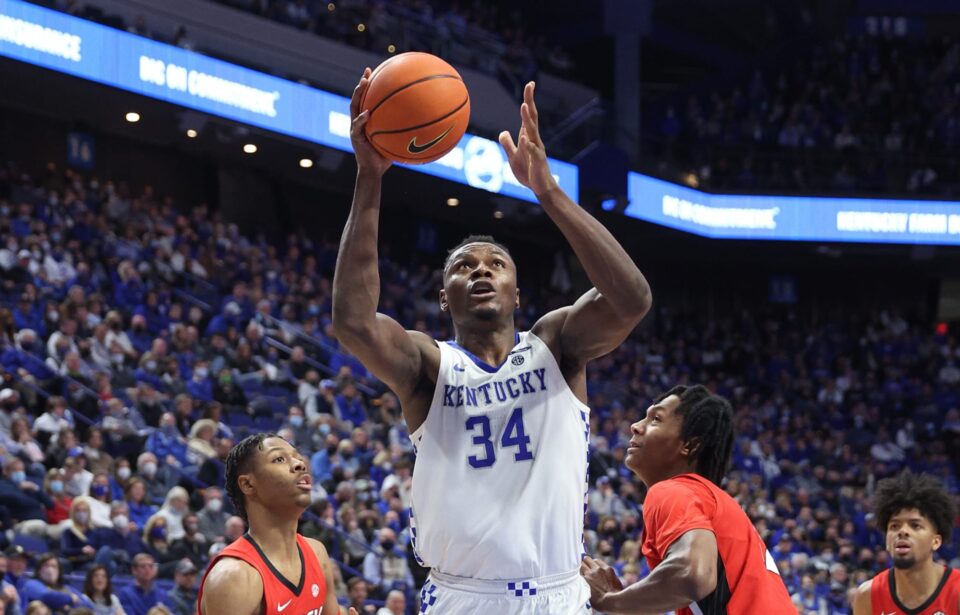 LEXINGTON, KENTUCKY – JANUARY 08: Oscar Tshiebwe #3 of the Kentucky Wildcats shoots the ball against the Georgia Bulldogs at Rupp Arena on January 08, 2022 in Lexington, Kentucky. (Photo by Andy Lyons/Getty Images)

It’s been a year to remember for Kentucky stud Oscar Tshiebwe and Wildcats supporters are loving what they’re seeing out of him.

No. 18 Kentucky is riding high right now, as the team was able to record a strong win over Vanderbilt on Tuesday night. Ask any UK fans about that victory and they’ll surely be quick to bring up the play of Oscar Tshiebwe.

The forward has been nothing short of fantastic this season and he showcased his strong play in the win over Vandy as well. Tshiebwe ended play with a career-high 30 points, while also adding 13 rebounds. This guy is playing on another level right now.

Picking an All-American team is going to be harder this season than ever before. But you can’t have a first-team without Oscar Tshiebwe. 30 and 13 tonight at Vanderbilt.

Oscar Tshiebwe has been fantastic for Kentucky in 2021-22The 6-9, 255-pound junior has been an absolute beast in the paint, which has been great to see for Kentucky head coach John Calipari. On the year, Tshiebwe is averaging an impressive 17 points and 15.1 rebounds per contest.

“That is crazy because I never even think about ‘today I’m going here’,” Tshiebwe said after the win via UK Athletics. “I just think that today, I’m going to go out and fight. I just go out there and fight. I never had a dream about scoring 30 points in a game, it just happened. I have the ability to finish down in the post and I made free throws. That’s a good thing.”

In addition to being a great player, Tshiebwe is also incredibly humble, which you can see from the quote above. With Kentucky in the middle of a great season too, you better believe that the forward will be ready to make plenty of noise once the tournament arrives as well. Tshiebwe will be a player to watch closely once March Madness does get underway.