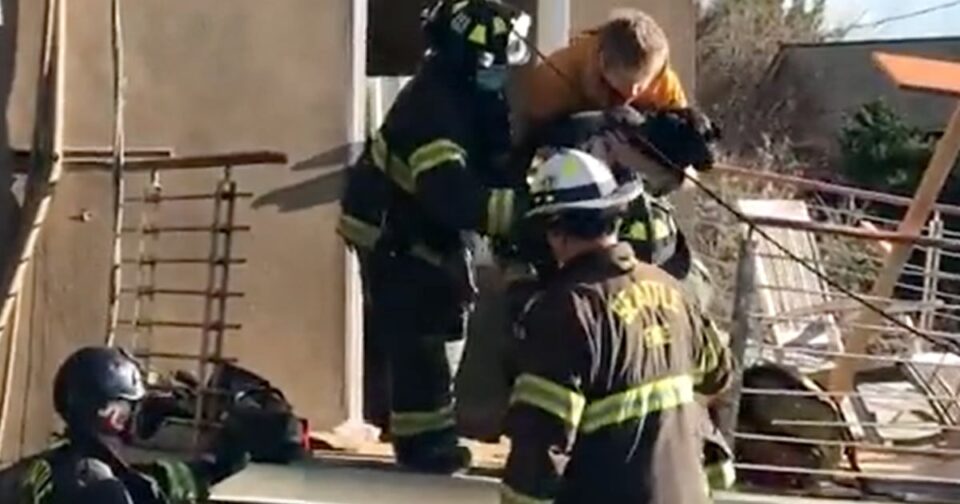 Six days after a Seattle house collapsed in a landslide during heavy rains, firefighters rescued a dog Thursday that had been missing and presumed dead, officials said.

The Seattle Fire Department said it went to the house Thursday to investigate reports that the owners may have heard the dog inside the home.

“My baby!” Didi Fritts, one of the homeowners, yelled after the black dog was carried out of the home in the city’s Magnolia neighborhood, NBC affiliate KING of Seattle reported.

Video from the scene showed a rescuer saying “he’s OK” as the dog, Sammy, was taken out of the building. Sammy was described as being in stable condition.

The two-story house slid off its foundation and partly down a slope in the landslide Friday.

Didi Fritts managed to escape, and firefighters rescued James Fritts, who was pinned. One of their dogs died, and the second, Sammy, was presumed dead.

“It was a loud roar, and the whole thing came down on us,” Didi Fritts told reporters. She said she thought they were both going to die.

With the first floor pancaked, Didi Fritts had 4 inches of clearance in which to move and was able to push through debris to escape, the couple said. James Fritts was trapped by a fallen refrigerator.

The fire department has said rain most likely caused the landslide.

Seattle got over 4 inches of rain last week, and Washington was soaked by days of rain that caused flooding in other parts of the state, killing one person.

In the mountains, heavy snow closed all four major passes connecting eastern and western Washington. The last of those, White Pass, was reopened Thursday, the state Transportation Department said.