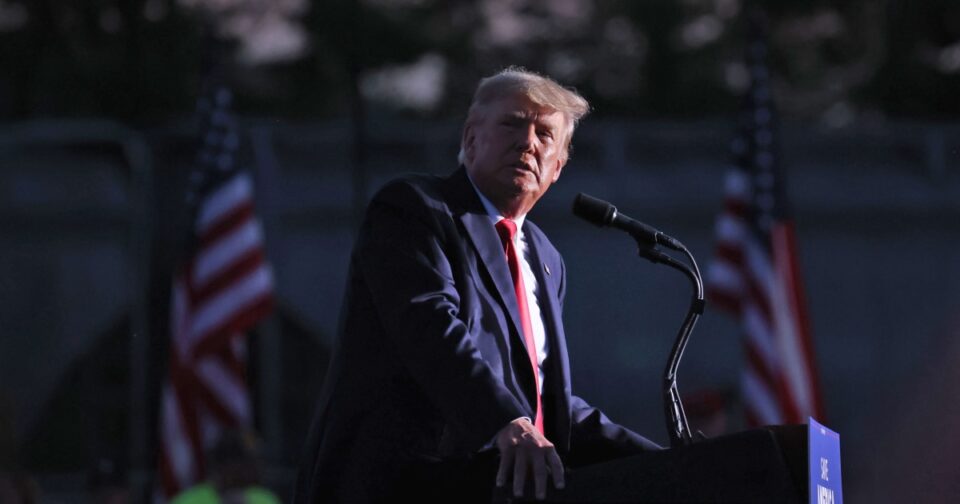 WASHINGTON — When former President Donald Trump headlined a fundraiser for the House Republicans’ campaign arm in Tampa, Florida, in November, Rep. Gus Bilirakis, R-Fla., seized the opportunity of a face-to-face encounter to ask for Trump’s endorsement.

“Yes, yes, yes,” Trump replied. Then he said he would talk to his team about it.

The next day, the former president called Bilirakis to offer the most sought-after validation in Republican politics. While Bilirakis drove to an event in north Hillsborough County, Trump read a proposed statement over the phone and asked if the congressman had any changes to make.

Bilirakis, who could face a tough re-election race, was just thrilled to have the stamp of approval. He didn’t change a comma.

“Of course it’s important to me,” Bilirakis said in an interview with NBC News in the Capitol Tuesday. As to whether Trump’s imprimatur will scare off potential primary challengers, Bilirakis, whose district is likely to become more Republican in an upcoming rewrite of Florida’s congressional map, said, “We’ll see.”

The experience of the eight-term lawmaker, whose father held the seat for 12 terms before him, is reflective of a sometimes secretive process that was described in interviews with more than half a dozen people familiar with aspects of the endorsement operation. Trump has endorsed 91 candidates for House, Senate, governorships, state legislative seats and a variety of statewide offices, including secretary of state, attorney general and Texas land commissioner, according to an NBC News review.

And when he takes the stage for his first rally of 2022, in Florence, Arizona, Saturday night, he will be flanked by a retinue of hand-picked favorites who deny that he lost their home state in 2020. Arizona saw the closest finish in the country — Trump lost by less than 10,500 votes — and the outcome remained the same after a partisan GOP review failed to change the result.

Still, when Trump abruptly canceled a planned Jan. 6 speech designed to rebut the actual election results, he promised he would make his case at Saturday’s rally. The candidates who agree with him have been assigned choice speaking slots at the event.

The most common theme of Trump’s endorsements, particularly at the state level, is that he is backing candidates who have voiced support for his lie that the 2020 election was rigged against him. Fifty-nine of the 91 have questioned the 2020 election results, according to an NBC News review, including those who voted against certifying President Joe Biden’s victory in Congress.

He has also become enamored of the anti-endorsement, ripping into Republican incumbents who challenge him or his lie about the election.

“Rumors are that Doug Ducey, the weak RINO Governor from Arizona, is being pushed by Old Crow Mitch McConnell to run for the U.S. Senate,” he said in a Friday statement, ahead of his weekend rally in that state. “He will never have my endorsement or the support of MAGA Nation!”

“I will never endorse this jerk again,” he said last Sunday, after Sen. Mike Rounds, R-S.D., called the election fair.

Trump pollster Tony Fabrizio conducted a survey of South Dakota voters for a conservative group that is trying to show that support for the state’s other senator, Republican John Thune, is weak enough for him to lose a primary. While Rounds isn’t up for re-election for another five years, Thune is on the ballot in 2022.

Facing political and personal destruction at Trump’s hands, three House Republicans who voted to impeach him last year have decided not to run for re-election. And Rep. Liz Cheney, R-Wyo., who is serving on the Democratic-led House committee investigating the Jan. 6 attack on the Capitol, is in danger of losing a primary to Trump-endorsed Harriet Hageman.

In Alaska, Trump endorsed Gov. Mike Dunleavy on the condition that Dunleavy not back Sen. Lisa Murkowski’s re-election bid. Trump has endorsed Kelly Tshibaka, who is seeking to deny Murkowski the GOP nomination. (Murkowski voted to convict Trump in his impeachment trial last year.)

But there’s another key thread: Trump is looking to find races where his endorsement can be tied directly to a hopeful’s fate.

He has stayed away from several competitive GOP Senate primaries where multiple candidates are running as acolytes, including in Missouri, Arizona and Ohio. In Pennsylvania, Trump endorsed Sean Parnell — only to see Parnell suspend his campaign amid domestic abuse allegations. That served as a warning that he needed a better vetting process.

In cases where Trump doesn’t have a long-standing relationship with the candidate — or isn’t making the endorsement to thwart an adversary — Republicans familiar with the process describe a more cautious and strategic approach than the one he pursued as president or in the immediate aftermath of his defeat.

It’s a two-tier process: Some candidates Trump is going to endorse no matter what. Other lower-tier hopefuls have to be vetted.

“In the end, he makes these decisions, but he does it after having it run through channels,” said one Republican operative. “There’s nobody that would have stopped him from endorsing Jody Hice or David Perdue,” the operative said, referring to Georgia candidates who are trying to unseat Secretary of State Brad Raffensberger and Gov. Brian Kemp, both of whom rejected Trump’s false claims of foul play in their state in 2020. “No process would have stopped that.”

While the decisions start from different angles — a one-on-one encounter with a supplicant, Trump approving of an ally’s public commentary on him, or appeals to Wiles’s endorsement team — they end in the same place.

“He makes up his own mind,” said Rep. Beth Van Duyne, R-Texas, who narrowly won her seat in 2020 and got a second endorsement from Trump in December, along with fellow Texas Reps. Michael Burgess, Roger Williams and Michael Cloud. Van Duyne said she wasn’t aware of any formal process and that it took her longer to get approved to serve as a Housing and Urban Development official in Trump’s administration than to get her most recent endorsement.

Behind the scenes, there’s an effort afoot to align Trump-backed candidates from around the country. A super PAC run by Trump ally Pam Bondi is bringing many of them together for a policy conference and fundraising dinner at Trump’s Mar-a-Lago resort next month. Trump is scheduled to speak at the Feb. 23 dinner, according to an email sent to donors that was first reported by The New York Times.

The competition for Trump’s endorsement has also spurred jockeying to hire advisers who are perceived to have his ear. Rep. Billy Long, R-Mo., and Bernie Moreno, an Ohio Republican, both hired former White House counselor Kellyanne Conway to advise their Senate campaigns. David McCormick, who recently entered the Senate race in Pennsylvania, has lined up so many Trump-world figures that it’s hard to keep count.

But some longtime Republican strategists aren’t convinced that’s the ticket, at least not for the second-tier candidates who are unknown to the former president. The better route — save a direct relationship with Trump — may be to go through Wiles’ vetting process.

“There’s a lot of other people milling around and keeping a room at Mar-a-Lago and finding a way to spin by the table, but I don’t think those people, by and large, have any sway in the process,” said the GOP operative. “Not everybody gets a meeting. If they’re considering [an endorsement], they meet with everybody who they’re considering.”

Walmart is getting into the wedding dress business