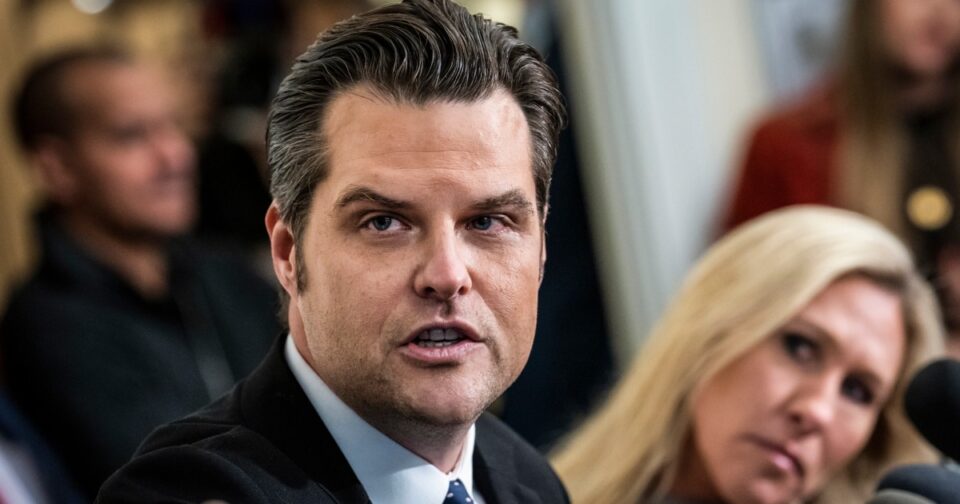 Florida Republican Rep. Matt Gaetz’s ex-girlfriend testified before a federal grand jury Wednesday after reportedly being in talks with prosecutors about an immunity deal. Under a possible deal, she would be expected to receive immunity from potential prosecution for allegedly obstructing justice in return for her testimony. Well played, prosecutors.

Going after an ex-girlfriend is brilliant. It’s diabolical, but brilliant.

It’s important to stress that in the case of Gaetz’s ex-girlfriend, we don’t know what information she provided as part of the FBI’s reported investigation into the congressman for alleged crimes including the sex trafficking of a 17-year-old. It’s also important to stress that Gaetz hasn’t been charged with any crime and has denied all wrongdoing.

The lesson to criminals is clear. If you’re dating someone, and that someone knows what you’re up to criminally, you should think about proposing.

We do know, though, that if the target of a federal investigation is going to be romantically involved, prosecutors would prefer it be with a girlfriend rather than a wife. And they’d always prefer to deal with an ex-girlfriend than a current girlfriend.

There are at least two reasons why it’s less appealing for the government to try to persuade a target’s wife to cooperate. Federal courts recognize two marital privileges: Either spouse may assert the confidential marital communications privilege to prevent the other one from testifying about private discussions they have during the marriage. Additionally, the spousal testimonial privilege permits one spouse to refuse to testify against the other during the marriage.

Historically, American society has placed a value on certain relationships by protecting the participants from being compelled to testify in court. Only a very exclusive set of relationships can claim these privileges in federal court: clergy-penitent, attorney-client, psychotherapist-patient, and spouses.

There are exactly zero “girlfriend” testimonial privileges. It doesn’t matter if the girlfriend has lived with the boyfriend for years. It doesn’t matter if they have kids together. A girlfriend is not a wife — but she is a potential gold mine for prosecutors. They have a witness who often knows the target as well as a spouse would, but who can be questioned, cajoled and subpoenaed without worrying about any of those pesky privilege barriers.

Defendants have tried mightily to convince a court to blur the line and extend the privilege to a girlfriend, or to the mother of their kids. They almost always fail.

I can’t blame them for trying, but the reality is that this privilege is more often pared down by the courts than it is extended. And that’s a good thing. Any privilege that conceals criminality has to be sparingly used. It’s not great that the marital privileges arguably discriminate against unmarried couples. They also have a rather unsavory history. But they serve a purpose, and there’s a reason they are limited just to marriage.

The marital privileges have their origins in medieval, demeaning views about gender: Since the woman had no recognized separate legal existence, she was one with the husband. If the husband wasn’t going to testify in his own case, neither could his wife.

The Supreme Court only expressly recognized the marital communications privilege in 1934. Until another high court opinion in 1980, Trammel vs. United States, the country perpetuated an antiquated standard under which one spouse could claim the privilege to prohibit the other from testifying even if that person wanted to.

As contemporary views of marriage evolve and expand, the privilege should expand — whether it’s to same-sex marriages or lawful civil unions.

But as the court found in Trammel, “When one spouse is willing to testify against the other in a criminal proceeding — whatever the motivation — their relationship is almost certainly in disrepair; there is probably little in the way of marital harmony for the privilege to preserve.”

The American legal system’s valuation that a formal marriage above other relationships has social consequences. Without marriage, there is no privilege — no matter how close the couple is. Consider that these privileges were completely unavailable to same-sex couples in the United States until 2004, when Massachusetts was the first state to legalize same-sex marriage. Common law spouses may reject official state approval of their relationship, but they risk loss of the privilege with it. Though courts have considered extending the privilege to common law spouses, few states even recognize this kind of marriage now.

But marital privileges serve an important societal purpose. Whatever rationales have mercifully been discarded over the years, the spousal privilege remains necessary for the harmony and sanctity of marriage, as the courts have put it. As contemporary views of marriage evolve and expand, the privilege should expand — whether it’s to same-sex marriages or lawful civil unions.

But it should not encompass casual relationships. A boyfriend-girlfriend privilege would be an unmitigated disaster. Among other problems, it would encourage criminals to date more when, frankly, we want criminals to date less.

And either way, a girlfriend usually becomes either a wife or an ex-girlfriend. There’s a difference between the commitment of marriage and someone you just “Netflix and chill” with. It would frustrate the purpose behind the privilege if everyone a defendant ever went on a Bumble date with could refuse to testify against him in a criminal case.

The lesson to criminals is clear. If you’re dating someone, and that someone knows what you’re up to criminally, you should think about proposing.