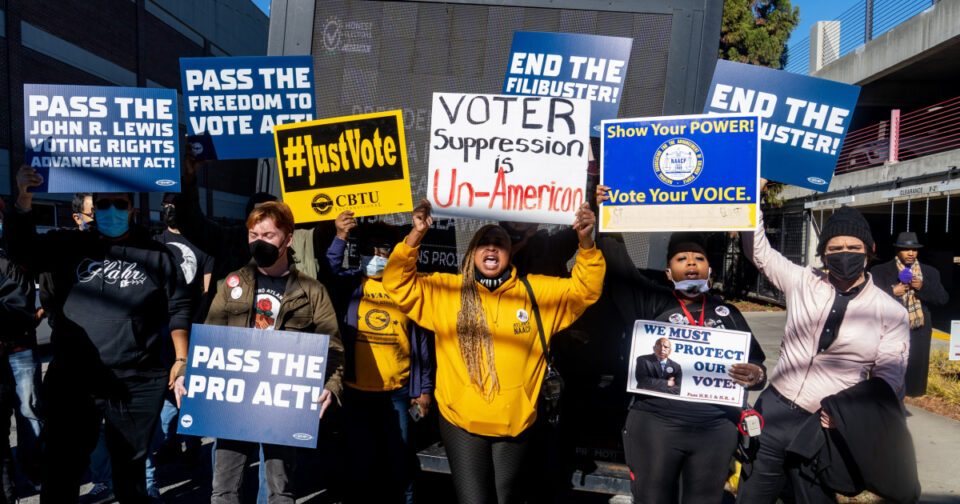 WASHINGTON — As the Senate prepares to take up voting legislation this week, House Majority Whip James Clyburn, D-S.C., on Sunday emphasized that congressional Democrats will not give up on the fight despite major obstacles having paved a “bleak” path to election reform.

“We’re not giving up,” Clyburn said on CNN’s “State of the Union” on Sunday. “We’re going to fight, and we plan to win, because people of goodwill are going to break their silence and help us win this battle.”

“They may be on life support, but, you know, John Lewis and others did not give up after the ’64 Civil Rights Act. That’s why he got the ’65 Voting Rights Act,” he said.

Sen. Kyrsten Sinema, D-Ariz., made clear last week that she won’t vote to gut the filibuster rule to ease passage of the Freedom to Vote Act and the John Lewis Voting Rights Advancement Act, which means the Senate will miss a self-imposed Martin Luther King Jr. Day deadline to vote on both bills.

Senate Majority Leader Chuck Schumer, D-N.Y., said Thursday that the chamber would not take up the legislation until Tuesday, citing “the circumstances regarding Covid and another potentially hazardous winter storm” approaching D.C.

Sinema said she supports the two bills but continues to favor the 60-vote rule, which Democrats have no hope of clearing due to overwhelming Republican opposition to the bills. Her remarks signaled that Democrats’ aggressive efforts to persuade her to back changing Senate rules had failed.

“People tell me they are for this legislation, but they’re against the processes that we need in order to get the legislation,” Clyburn said on NBC’s “Meet the Press” on Sunday. “Then, I don’t think you’re on the right side of history.”

“It may look bleak now, but we are going to keep pressing. We are not going to give in on this,” he said.

Following Sinema’s comments, President Joe Biden expressed uncertainty over whether his party would be able to pass voting rights legislation through Congress after he emerged from a closed-door luncheon with Senate Democrats on Thursday.

Last week, the House voted 220-203 along party lines to pass the two voting rights bills in one package. The Senate will receive it as a “message,” enabling Democrats to open debate on the package with a simple majority.

But they’re guaranteed to hit a roadblock when they need 60 votes to break a filibuster and end debate in the 50-50 Senate. The Freedom to Vote Act has no Republican support. The John Lewis bill has one GOP backer: Lisa Murkowski of Alaska.