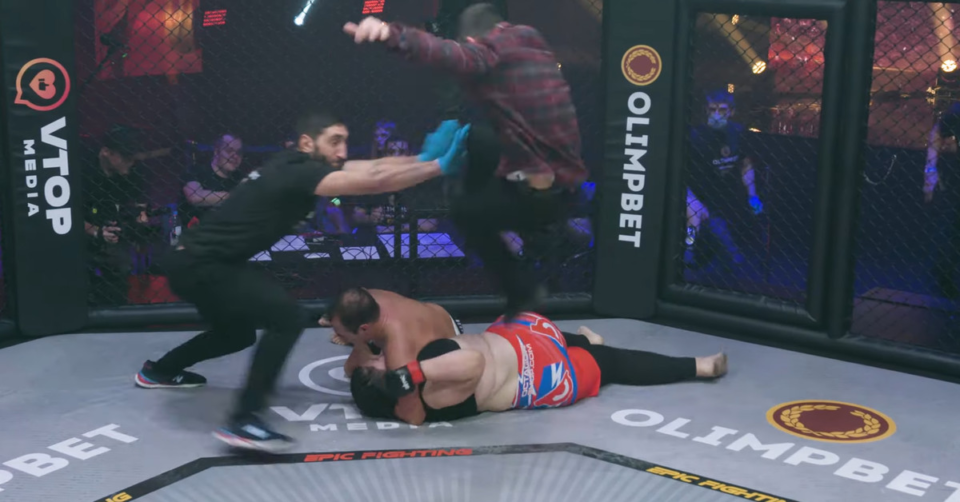 There’s no shortage of nonsense taking place in the combat sports world. And more recently, with the rise of celebrity boxing, and some surprisingly successful combat sports offshoots like BKFC and Fight Circus, there seems to be a growing wave of freak fight promotions, especially coming out of Russia and Poland.

The latest of those is Epic Fighting Championships (h/t MMA Fighting), who recently put on a card featuring a man vs. woman bout, a two vs. two women’s team MMA fight, and a battle of what appear to be SoundCloud (ish) rappers in the main event.

The first bout of the night, between 26-year-old blogger Sasha Mamaha and 50-year-old porn-themed performance artist Alexander Pistoletov got off to exactly the rocky start you’d expect from a pre-fight intro that appears to have largely been filmed in Pistoletov’s sex dungeon.

Early in the second of a planned three 2-minute rounds, a member of Mamaha’s entourage rushed the cage, tackling Pistoletov to the mat. The attacker was removed from the cage, but rather than waiving off the fight – or even just removing the dude from the premises – he was escorted back to his spot cageside, and the bout continued on.

If that all seems like a recipe for stupidity, then baby we got a stew goin’. Just a few minutes later, in the third round, Pistoletov achieved a scarfhold armlock position off a failed headlock throw attempt from Mamaha, and looked to be in position to get the sub win. Until the same member of Mamaha’s entourage leapt the cage again and went for a flying stomp.

Still, when your goal is to put on a show, then the show must go on. The ref restarted the bout on the mat, in the scarfhold postion, leading to a quick tap from Mamaha. Who then complained so much about the result that she got an additional round to work with, where she defeated Pistoletov by decision… I guess.

The main event saw Ilya Blanko defeat a man listed only as “Dirty Monk” with what appeard to be a clear illegal knee followed by a schoolyard guillotine. If you want to take a look at the whole event, you can watch it free on YouTube right here.

SWAT team involved in incident at synagogue in Colleyville, Texas