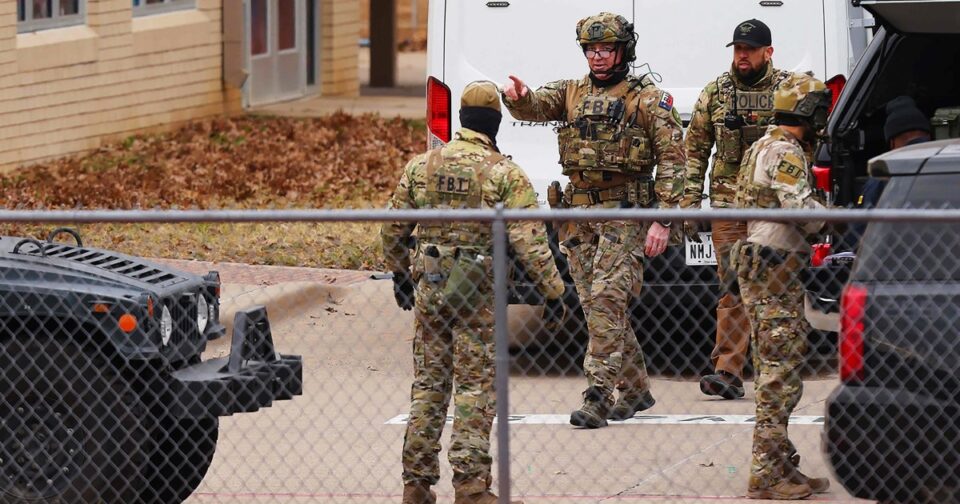 The FBI identified the gunman who held four people hostage at a synagogue in Texas on Saturday, leading to an hours-long standoff outside the Dallas-Fort Worth area.

Malik Faisal Akram, 44, a British citizen, held the hostages against their will at the Congregation Beth Israel, a Reform synagogue in the city of Colleyville, according to Matthew DeSarno, the FBI’s special agent in charge in Dallas.

Authorities said Akram died during the standoff Saturday night but did not offer further details. A spokesman for Britain’s Foreign, Commonwealth and Development Office said the agency was aware of “the death of a British man in Texas” but did not say whether he was referring to the suspect.

“The FBI’s Evidence Response Team (ERT) will continue processing evidence at the synagogue,” DeSarno said in a statement Sunday. “At this time, there is no indication that other individuals are involved.”

During the nearly 10-hour hostage situation, Akram demanded the release of Aafia Siddiqui, according to three senior law enforcement officials briefed on the situation.

Siddiqui, 49, was convicted by a federal jury in 2010 of attempting to kill U.S. officers in Afghanistan and is currently being held at FMC Carswell, a federal prison in Fort Worth.

President Joe Biden addressed the hostage situation Sunday, commending the authorities on the ground who resolved the conflict. “They did one hell of a job. This was an act of terror.”

Rabbi Charlie Cytron-Walker was among those who were held hostage Saturday when Akram disrupted the morning Shabbat service, which was livestreamed for the congregation.

It’s unclear exactly how the situation unfolded Saturday morning, but the man had Cytron-Walker call a rabbi in New York City to say he was being held hostage and to express the demand of Siddiqui’s release, the officials said.

Cytron-Walker said he was “filled with appreciation” for those who offered their support and the law enforcement who helped them to escape unharmed.

DeSarno credited hostage negotiators during a briefing Saturday for their work alongside hundreds of local and federal authorities.

Akram’s brother, Gulbar, said in statement obtained by Sky News Sunday that their family assisted authorities in negotiations and that Akram was “suffering from mental health issues.”

“We would like to say that we as a family do not condone any of his actions and would like to sincerely apologize wholeheartedly to all the victims involved in the unfortunate incident,” the statement said.

He added that the family was “absolutely devastated” and called any attack on another human being “absolutely inexcusable.”

The first hostage was released unharmed at about 5 p.m., but the others were freed roughly four hours later, when the FBI’s hostage rescue team entered the synagogue. The hostages, all of whom were adults, were not physically harmed and did not require medical attention, officials said.

“Prayers answered. All hostages are out alive and safe,” Texas Gov. Greg Abbott said in a tweet.