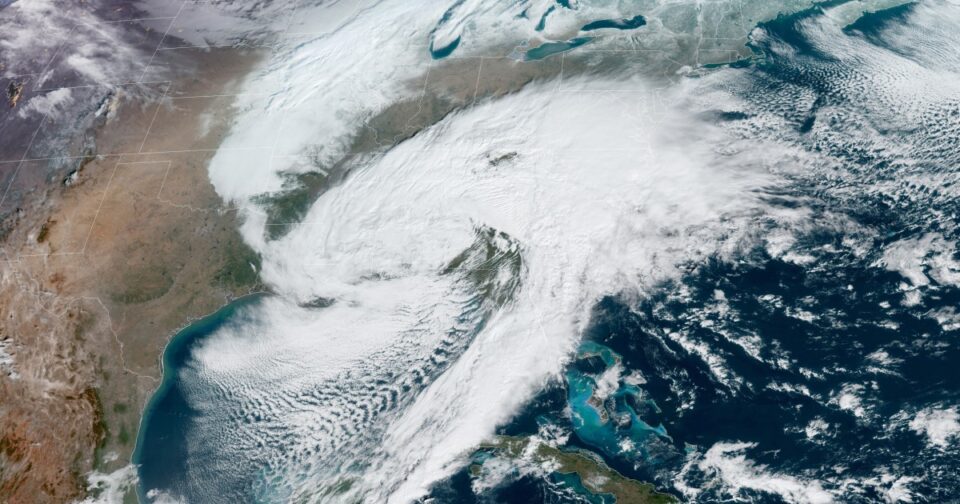 A dangerous winter storm combining high winds and ice swept through parts of the U.S. Southeast on Sunday, knocking out power, felling trees and fences and coating roads with a treacherous frigid glaze.

Tens of thousands of customers were without power in Georgia, North Carolina, South Carolina and Florida. More than an inch of snow fell per hour in some parts of the Carolinas, Georgia, Tennessee and Virginia, according to the National Weather Service Storm Prediction Center.

The storm was making air travel extremely difficult in some parts of the South. The nation’s hardest hit airport — Charlotte Douglas International remained open around dawn Sunday, the airport said in a weather briefing. But more than 1,000 Sunday flights in Charlotte have been cancelled — more than 80% of the airport’s Sunday schedule, according to the flight tracking service flightaware.com. Charlotte is a major hub in the South for American Airlines.

In Atlanta, where Delta Air Lines operates it main hub, more than 300 Sunday flights have been canceled.

Conditions were expected to continue to deteriorate later Sunday, and possible ground stops were possible at airports in the Washington, D.C. area, the Federal Aviation Administration said in its air traffic control plan for Sunday.

Heavy snow will extend from the Tennessee Valley, the central and southern Appalachians and parts of the MidAtlantic, the National Weather Service said in a bulletin Sunday. It added that there will be significant rain and freezing rain over parts of the Southeast.

In Virginia, where a blizzard left thousands of motorists trapped on clogged highways earlier this month, outgoing Gov. Ralph Northam declared a state of emergency and urged people to take the approaching storm seriously.

More emergency orders have been issued in the Southeast as heavy snow and rain are expected early next week in the Tennessee and Ohio valleys and the Central/Southern Appalachians.

A winter storm warning was extended from Georgia to New York as a low pressure system, that will be the cause of snow along the east coast and in parts of the midwest, is expected to spread from the lower Tennessee Valley into the Carolinas and as far north as upstate New York and southern New England on Sunday.

“Hopefully, the storm will underdeliver, but it could overdeliver. We just don’t know,” said Gov. Kemp while announcing storm preparations as severe weather is expected to hit parts of at least 14 states, including Kentucky, Ohio and West Virginia.

More than 8 inches of snowfall is expected from the Southern Appalachians up to west Virginia, according to the Weather Prediction Center. In the Tennessee and Ohio valleys, the most intense snowfall rates may be more than one inch of snowfall per hour, the Center said. The eastern region of the state can also expect to see gusts of wind of up to 70 miles per hour.

Northeastern states may see 12 inches of snow Monday to Tuesday. As the storm moves, light snow will remain over parts of the Central/Southern Appalachians and northeast by Monday evening into Tuesday.

“This is going to be a pretty bad storm in the upper part of the state,” Gov. McMaster said. “The good news is it’ll be coming on the weekend and holiday on Monday, so schools and offices will be closed. That’s good because there won’t be that many people on the roads and that’s good because we’re expecting a lot of ice on the roads.”

Several schools and businesses are expected to remain closed on Monday for Martin Luther King Jr. Day which may reduce the amount of people on the roads but those that do venture outside, have been warned to look out for trees or power lines that could be down due to the storm.

Who is Aafia Siddiqui, the federal prisoner at the center of the Texas hostage situation?