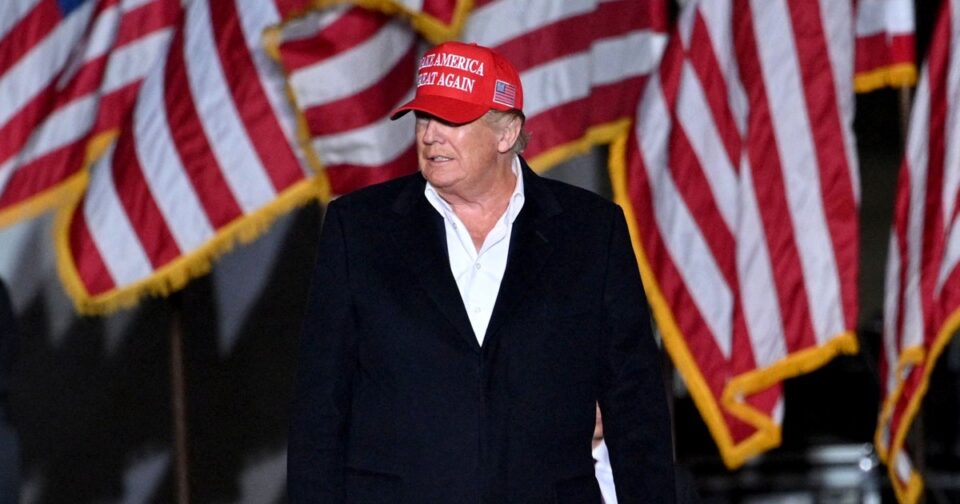 FLORENCE, Ariz. — In this tiny prison town between Phoenix and Tucson, former President Donald Trump riled up his base Saturday night with a raft of lies, tin-foil-hat conspiracy theories and absurd equivalencies.

But while frayed threads of fiction are nothing new to Trump, his open-air rally here was exotic and portentous even by his standards, a tacit acknowledgement of how much this year’s midterms mean for his ability to reclaim the Oval Office.

Having endorsed more than 90 candidates across the country, including Republicans in high-profile races here, he is trying to stock ballots with acolytes. If his favored candidates fare well, he will tighten his stranglehold on the GOP and improve his chances of winning in 2024.

Arizona is ground zero for both missions.

Arizona is the state he lost by the narrowest margin in 2020, less than 10,500 votes. And his undercard Saturday night featured a blizzard of Trump-styled radicals — all of them election deniers — who hope to purge establishment figures from their party and take control of state and federal elections.

They included three House members — Reps. Paul Gosar, Andy Biggs and Debbie Lesko — who voted against certifying President Joe Biden’s 2020 election victory; secretary of state candidate Mark Finchem, who has associated himself with Q-Anon; and gubernatorial hopeful Kari Lake, who said Saturday that she wants to imprison state officials who conducted the 2020 election.

Gosar, who was in contact with Jan. 6 “Stop the Steal” rally organizers, called himself “the most dangerous man” in Congress in a warm-up speech.

As if to ensure that he couldn’t be out-Trumped at his own rally, the former president questioned whether the FBI helped stage the Jan. 6 attack on the U.S. Capitol — a favorite fabrication of Fox News host Tucker Carlson — and suggested an an upside-down equivalency between a Capitol Police officer and the rioter he shot.

“Exactly how many of those present at the Capitol complex on Jan. 6 were FBI confidential informants, agents or otherwise working directly or indirectly with an agency of the United States government?” Trump asked.

Only minutes earlier he said Lt. Michael Byrd shot Ashli Babbitt, who was trying to enter the House speaker’s lobby through a broken window, “for no reason.”

“Let’s see how he could do without the protections that he got,” Trump said. “If that happened the other way around, they’ll be calling ‘Let’s bring back the electric chair.’ … He’s a disgrace the way he shot Ashli.”

The combination put Trump firmly on Babbitt’s side but against an attack that he incited and she participated in. The crowd didn’t seem to care much about the logic. Trump was cheered intermittently between chants of “Let’s Go Brandon,” “F— Joe Biden” and “Lock him up!” — the latter a reference to Dr. Anthony Fauci, the director of the National Institute of Allergy and Infectious Diseases.

Mike McNulty, a 66-year-old teacher from Phoenix, tore into Fauci in an interview before Trump spoke, comparing the nation’s leading infectious disease expert to the Nazi “Angel of Death” Josef Mengele, who performed inhumane and fatal experiments on prisoners at the Auschwitz concentration camp.

“Fauci’s worse than Mengele,” McNulty said, adding that Trump is “probably a walking dead man” because he has been vaccinated. Still, McNulty said he’ll back Trump if he survives the vaccine.

Many of Trump’s supporters began leaving before he stopped lying. But that had more to do with the concern about thousands of people departing at the same time down a long two-lane feeder road than a lack of enthusiasm for him.

Rosetta Murphy, 60, traveled from Albany, Oregon, more than 1,000 miles away, to see Trump. Like the speakers Saturday night, she said Trump was robbed in 2020.

“It was stolen, definitely stolen,” she said. “Everybody loves Trump.”

Bertha Lopez, 61, a resident of Florence, didn’t have to go very far to attend the rally. But she was no less excited about the former president and his prospects for 2024. She said there’s no one else in the GOP she’s interested in seeing run.

So was MyPillow founder Mike Lindell, a close Trump friend who has been peddling false claims that voting machines were rigged. Dominion, a company that makes voting machines, has filed a $1.3 billion defamation suit against him.

At the same time, Lindell is suing to block the House committee investigating the Jan. 6 attack from obtaining his phone records. Asked whether he had any discussions with the panel, Lindell quickly pivoted.

“I think you should be more worried about things in our country that matter, like the next election and getting rid of the machines, Dominion,” he said.

Beijing Olympics says tickets will not be sold to general public