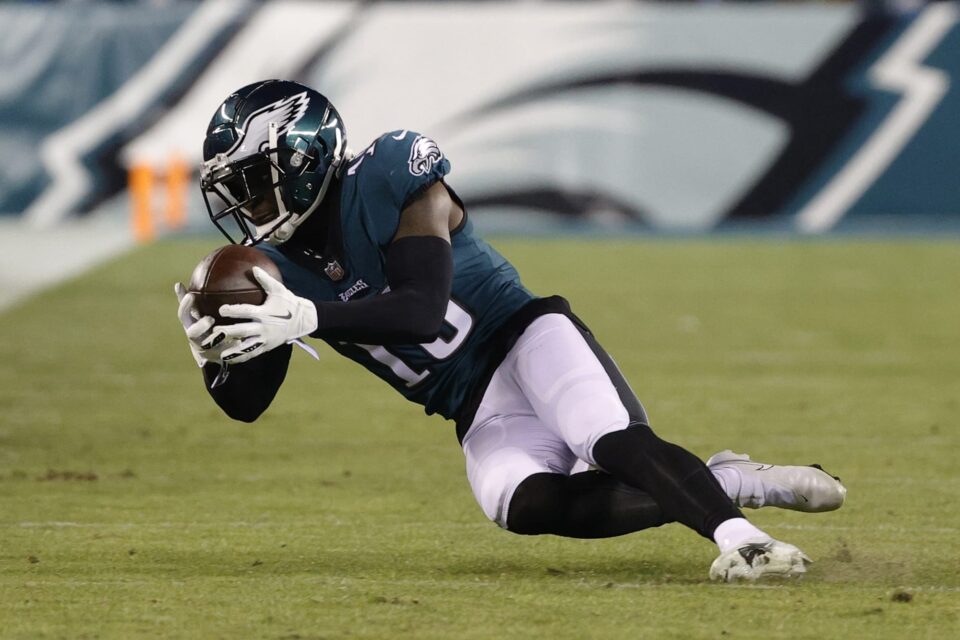 PHILADELPHIA, PENNSYLVANIA – JANUARY 08: Jalen Reagor #18 of the Philadelphia Eagles catches the ball in the third quarter of the game against the Dallas Cowboys at Lincoln Financial Field on January 08, 2022 in Philadelphia, Pennsylvania. (Photo by Tim Nwachukwu/Getty Images)

While the Philadelphia Eagles are indeed not good, at least the folks in charge of the radio broadcast don’t seem to be taking things too seriously.

The Philadelphia Eagles are having a miserable time facing the Tampa Bay Buccaneers, but at least Eagles fans and the Eagles radio broadcast team can find some sort of cathartic release with by making fun of some of the horrendous mistakes being made.

Muffed punts happen to fall under the category of “horrendous mistakes.” They give the opposing team a chance to snag the ball. It’s frustrating to watch. It’s probably frustrating to be a part of. Nobody (outside of the team that recovers said muffed punt) enjoys any part of this.

But, the folks on the Eagles radio call found a way to use sarcasm and their radio broadcast to help Eagles fans try to get through the pain. All it involved was a little bit of exasperated sarcasm.

Philadelphia Eagles radio broadcast sarcastically mocks muffed punt against Tampa Bay Buccaneers“Well, he did something,” is a very accurate statement. Jalen Reagor did indeed do something. It’s just not something anyone in Philadelphia will be thrilled with. Reagor himself probably isn’t exactly excited over the fact that he muffed the punt or that folks are mocking it.

Of course, the Buccaneers and their fans don’t seem to mind when the Eagles make mental mistakes or simple blunders like that muffed punt.

Prior to the muffed punt, the folks on the radio call are calling for the Eagles to do literally anything to help get their team back into the game. Before the frustrating error, the Eagles only trailed 17-0 and it was still early in the third quarter. That’s plenty of time to get right back into the game, assuming mistakes like muffed punts aren’t made.

While the folks behind the microphones were pleading for a big play to be made, they did indeed get to watch a big play.

It just happened to benefit the Buccaneers.

Tampa Bay currently holds a massive lead over the Eagles. Philadelphia, the seventh seed in the NFC Playoffs, trails Tampa Bay 31-7 in the fourth quarter.

What channel is the Cowboys-49ers game on?