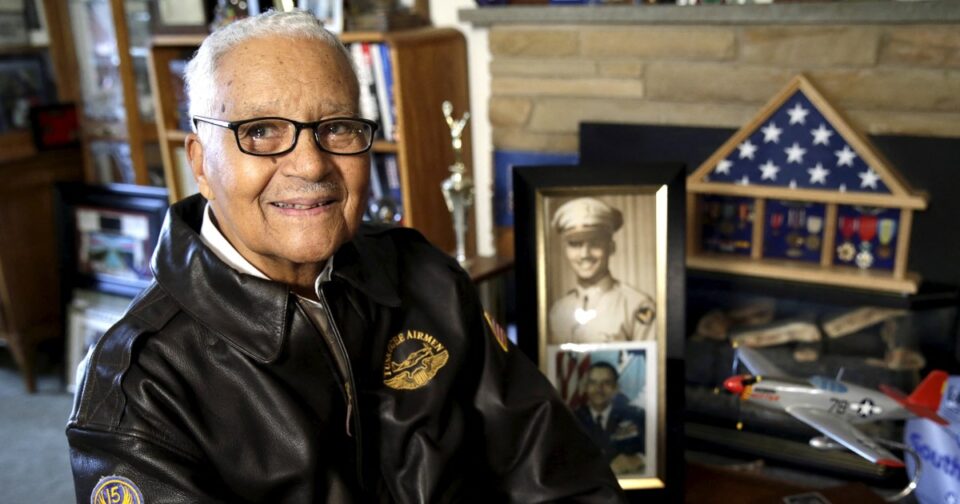 Charles McGee, one of a handful of Tuskegee Airmen pilots still alive in 2022, has died, his family announced Sunday. He was 102.

McGee, of Bethesda, Maryland, died peacefully in his sleep Sunday morning, his loved ones said in a statement. He received numerous awards, including the Bronze Star, and in 2020 President Donald Trump honored him in the State of the Union address, on the day he was promoted to honorary brigadier general.

He died with “his right hand over his heart, and was smiling serenely,” his youngest daughter, Yvonne McGee, who was at his side, said in the family’s statement.

“I fell in love with flying,” McGee told NBC affiliate WBAL of Baltimore in 2016.

Many of the nearly 1 million Black Americans who served in World War II saw it as a battle on two fronts, one against fascism overseas and another against the racist laws and attitudes that oppressed people of color at home.

The U.S. was in the untenable position during the war of opposing Adolf Hitler’s fascism, racism and religious intolerance while maintaining racism at home.

Although the armed forces weren’t desegregated until three years after World War II, many people believe the sacrifices of Black service members, including the Tuskegee Airmen, helped lay ground for the civil rights breakthroughs of the 1950s and ’60s.

“We didn’t enter training to say we’re going to go down to Tuskegee to set the world on fire,” McGee told WBAL. “But it turned out that what we accomplished dispelled biases and generalization and, in some cases, racism.”

The airmen were the subject of an eponymous 1995 movie starring Cuba Gooding Jr. and Laurence Fishburne.

McGee, who was born in Cleveland, used his experience to inspire new generations of fliers. He encouraged young people to become pilots, get educated and excel.

His mantra could be summarized by what he called the “four Ps,” his family said: “Perceive, Prepare, Perform, and Persevere.”

“He was a wonderful human being,” his son Ron McGee said in the statement. “I feel proud and privileged to be called his son.”

For his 100th birthday, in 2019, McGee was treated to time behind the yoke of a private jet for a flight between Frederick, Maryland, and Dover Air Force Base, Delaware.

His family said his last flight was in December as a passenger on an Air Force T-37 VIP Air Transport from Joint Base Andrews, Maryland, to Joint Base San Antonio–Randolph, where he visited the 99th Flying Training Squadron. It is the only active flight training squadron whose legacy began in the Tuskegee Airmen era.

What Whittingham said about Utah’s matchup with UCLA