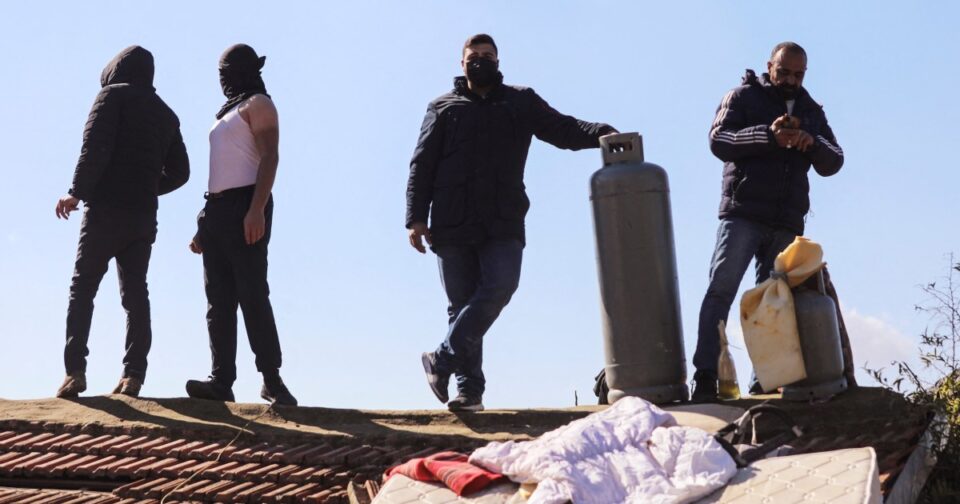 JERUSALEM — Palestinian residents of a flashpoint east Jerusalem neighborhood had a tense standoff with Israeli authorities Monday as police came to evict them from a disputed property.

Several residents of a home in Sheikh Jarrah climbed onto the roof of the building with gas tanks and threatened to set them alight should the Jerusalem municipality follow through with the eviction.

Mahmoud Salhiyeh, 50, said said he was ready to see his home and family go up in flames rather than hand over the keys to Jerusalem’s municipality.

“I will blow myself up, with the house, with the children, with everything,” he told NBC News by telephone as he stood on the roof. “My children, myself and my wife, my sister and her five children, we will all be blown up.”

One photo showed flames already tearing through a pile of debris on the ground as men looked down from the roof.

Salhiyeh said he has spent half his life fighting in courts for his home. Then without warning, the Jerusalem municipality arrived at his house early Monday and handed him an eviction order for his house, he said.

Residents say they purchased the property before 1967, when Israel captured east Jerusalem, while the state has argued in court that the family does not have rights to the property. The Jerusalem Municipality formally seized the property in 2017 for the purpose of building a special needs school.

A Jerusalem court ruled last year in favor of the city and authorized the eviction. The family has appealed and is awaiting a ruling, but the judge did not freeze the eviction order.

City hall and the police issued a joint statement saying the court ordered the family to vacate the property a year ago. The municipality said the property is to be used to build the school, which is to serve Palestinian children in the neighborhood.

Sheikh Jarrah is an east Jerusalem neighborhood where dozens of longtime Palestinian residents are battling efforts by Jewish settlers to evict them from their homes. That case, which has been in Israel’s Supreme Court for months, has drawn global attention and fueled last year’s Israeli-Palestinian violence.

Palestinians in east Jerusalem tend to live in poor, neglected neighborhoods and struggle to get permits and paperwork from city hall. They accuse Israel of trying to push them out of Jerusalem.

“You can’t have it both ways — to demand that the municipality act for the welfare of the Arab residents, and also to oppose the construction of educational institutions for their welfare,” he wrote on Twitter.

But Ir Amim, an Israeli rights group that follows developments in Jerusalem, said that in recent years the city gave up a different plot of land in Sheikh Jarrah originally designated for a Palestinian school and instead authorized construction of an ultra-Orthodox men’s seminary.

“The municipality appears to perceive it as reasonable and fit to dispossess a Palestinian family for the sake of a school rather than utilizing open land initially allocated for such purposes,” it said.

Fleur Hassan Nahoum, deputy mayor of Jerusalem, said in a statement Monday that contrary to some reports the eviction was not carried out in order to take land and give it to Jewish residents.

“This is totally false,” she said. “We are talking about a municipal dispute between the city and a family that built on public land that is zoned for a special needs school for the Arab residents of the city.”

Nahoum said the municipality planned to build six kindergartens and a school for children with special needs intended to serve the residents of the neighborhood in the area.

Israel captured east Jerusalem, along with the West Bank and the Gaza Strip, in the 1967 Mideast war. It later annexed the eastern half of the city — home to most of Jerusalem’s Palestinian population — in a move unrecognized by most of the international community. The Palestinians seek east Jerusalem as the capital of a future state.

Lawahez Jabari is a producer based in Tel Aviv. She has covered the Middle East conflict — on both the Israeli and Palestinian sides — for more than a decade.

At Ground Zero for 2024, Trump spins lies and conspiracy theories