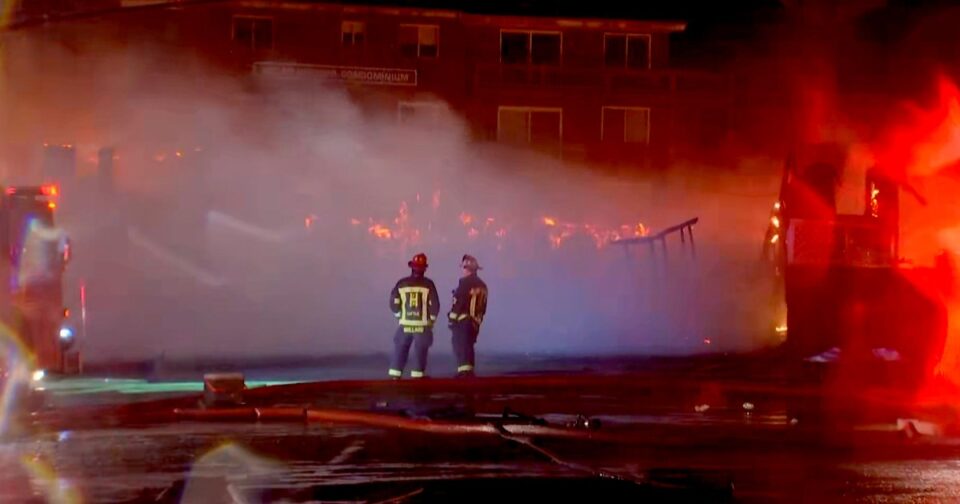 It is unclear what caused the blaze, and whether there have been any fatalities or injuries connected to the fire in the beachfront community on the border with New Hampshire.

In the hours after the fire, the Red Cross in Massachusetts said its volunteers were assisting more than 30 residents who were displaced by the incident, however.

The blaze, which evolved into a 9-alarm fire, was reported shortly before 2 a.m. ET Monday at what appeared to be the address for Michael’s Oceanfront Motel, the Salisbury Fire Department told NBC Boston.

In footage shared on social media, firefighters could be seen battling heavy flames as the fire could be seen spreading to multiple buildings.

Local officials asked a number of neighboring communities in Massachusetts and New Hampshire for help in battling the blaze, according to NBC Boston.

In a Facebook post, the North Hampton Fire & Rescue department in New Hampshire confirmed that it was helping respond to the blaze.

The department said multiple buildings were on fire, “requiring a massive mutual aid response from 3 states.”

It also shared video published on Facebook by Michael Kent, who identified himself as a firefighter with the Newburyport Fire Department in Massachusetts. In the video, flames could be seen ripping through multiple structures. Kent did not immediately respond to a request for comment.

Strong winds of around 20 to 30 mph made it difficult for firefighters to contain the blaze and prevent it from spreading further, NBC Boston reported.

The Salisbury Police Department said in a tweet that roadways near the scene would be closed as crews continued to battle the blaze. Residents were also asked to avoid the area.

The department later said that power and utilities had been shut off on Central Ave., where the blaze unfolded. It said a warming and temporary shelter had been set up at the nearby Hilton Center.

Police also said a community room had been set up at the local police station for anyone displaced or affected by the fire to receive assistance.

On its website, Michael’s Oceanfront Motel says it locally owned and has been open for 17 years. NBC News has contacted the motel for comment.

How Denzel Washington Helped Michael B. Jordan With His ‘Creed III’ Directorial Debut