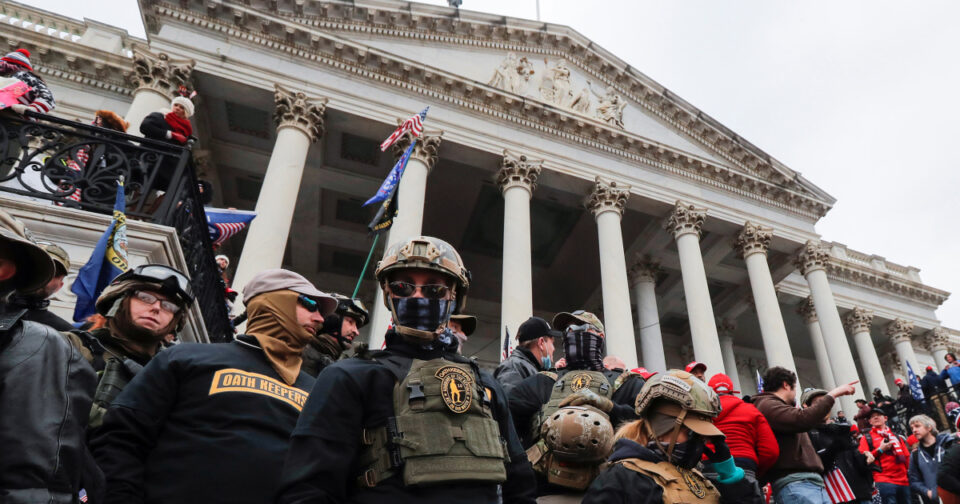 On Jan. 13, federal prosecutors unveiled their most ambitious charge to date in the ongoing investigations into the Jan. 6, 2021, insurrection: seditious conspiracy. The subjects of this charge are Stewart Rhodes and 10 alleged members of his far-right anti-government organization the Oath Keepers. Captured on video marching up the U.S. Capitol steps in “stack” formation, Rhodes’ organization became arguably the most visible face of the violent siege. Now its members are accused by the U.S. government of conspiring to “oppose the lawful transfer of presidential power by force.” (Rhodes’ lawyer has denied any wrongdoing.)

If there was any doubt before, the reality of Rhodes and the Oath Keepers has been exposed.

If there was any doubt before, the reality of Rhodes and the Oath Keepers has been exposed. They are not the “guardians of the republic” that they purport to be in their recruitment drives and on their website. Instead, they have weaponized patriotism in an effort to subvert American democracy. And they are not alone. The group is just one part of a patriot/militia movement that has long prepared for conflict with the federal government, which they view as tyrannical.

Though certainly deserving of our attention, it is important to recognize Oath Keepers as an example of a broader form of political extremism that has received too little attention for too long. These charges could portend increased Department of Justice attention for other patriot/militia groups and unaffiliated actors, though it seems unlikely that even a successful prosecution of the defendants in this indictment would meaningfully mitigate the threat of violence and criminality posed by the broader movement.

Notably, this is not the first time Oath Keepers members have allegedly been on the wrong side of the law. Since the group formed in 2009, a number of reported members have been arrested for a wide range of criminal activity — from armed standoffs with law enforcement to plots to kidnap elected officials to firearm crimes and even child sexual assault. Despite years of instigating and overseeing paramilitary activity, Rhodes himself has never been arrested — until now. As a Yale-educated lawyer, he has been careful to avoid activity that would put him or his organization in legal jeopardy. The indictment alleges, though, that he eventually abandoned that caution, calling for a “massively bloody revolution” if President Joe Biden assumed office.

Indeed, after Biden’s electoral victory, chatter between members of Oath Keepers allegedly became increasingly alarmist: According to the indictment, Rhodes declared that “we aren’t getting through this without a civil war. Too late for that. Prepare you[r] mind, body, spirit.” The indictment also details how Rhodes and a small cadre of co-conspirators spent months planning their Jan. 6 mobilization to Washington, D.C. They aimed to make members of Congress “very uncomfortable with all of us being a few hundred feet away” as a way to coerce Congress to decline to certify Biden’s electoral victory. This new indictment makes the case that there was clear coordination and planning — not just for traveling to Washington, D.C., and not just for anticipating clashes with antifa (far-left leaning militant groups) but to prevent Congress from fulfilling a constitutional requirement.

This indictment also shows that the Department of Justice continues to build cases against individuals who organized or participated in the insurrection. In some ways, this slow roll of indictments and arrests is reminiscent of law enforcement’s response to the 2014 Bundy Ranch standoff, when many alleged participants weren’t arrested until 2016. In that instance, prosecutors largely failed to obtain convictions, despite the well-documented and public nature of the confrontation. Perhaps prosecutors will have more success this time, given the evidence obtained from encrypted and open communication.

Oath Keepers, however, is just one part of the larger patriot/militia movement characterized and motivated by perceptions of federal tyranny. Even if the organization was to fold tomorrow, that would not necessarily change the broader movement. There are many other organizations to join, and many more like-minded people who will never officially join an organization.

In the aftermath of the insurrection, Oath Keepers entered a period of transition with members and supporters of the organization divided in their response. Some reaffirmed their commitment or became dues-paying members for the first time, perhaps believing that the insurrectionists were “patriots” who were stopped by corrupt law enforcement. Others renounced their involvement, indicating that the attack on the Capitol revealed the extremism inherent in Oath Keepers that they hadn’t previously noticed. And the indictment notes still others promoted conspiracy theories that those who obstructed Congress weren’t Oath Keepers (or Trump supporters or QAnon believers) but were antifa or federal agents pretending to be Oath Keepers in a false flag operation.

For the Oath Keepers defendants charged alongside Rhodes, the newest indictment represents a turning of the screws by the Department of Justice — drastically increasing potential criminal liability through multiple conspiracy charges and a potential terrorism sentencing enhancement. For those who have yet to be charged in a superseding indictment with seditious conspiracy, the Department of Justice seems to present them with a stark choice: plead guilty and cooperate against Rhodes and his co-conspirators, or face further criminal charges.

There are many other organizations to join, and many more like-minded people who will never officially join an organization.

For years, some members of Oath Keepers accused Rhodes of being a poor leader before they left the group. Since Jan. 6, that trend has continued: A leader of one chapter described the insurrection as an “ugly stain on our nation’s history” and announced that the chapter would become independent. In many ways, though, Stewart Rhodes is Oath Keepers — his role as president for life (unless found incompetent by the board of directors) is written into the group’s bylaws. In the wake of Rhodes’ arrest, it remains to be seen how the group will respond long term. In the short term, Oath Keepers general counsel Kellye SoRelle — whose phone was seized by the FBI in September 2021 — isreportedly “currently acting as president of Oath Keepers in lieu of Mr. Rhodes.”

If Rhodes is removed as the group’s leader long term (whether formally or with an acting replacement), an Oath Keepers future without Rhodes would likely mark a new paradigm, the characteristics of which are difficult to predict, though it’s much more likely that the looming trials of these indicted Oath Keepers will only reinforce the group’s recently assumed conspiratorial patterns. Those who are still committed members of the organization will likely see the trial as a charade or as government overreach, perhaps meant to mask the involvement of antifa or federal agents. Those who have renounced the organization will see the evidence presented by the prosecution as vindicating their change of heart.

Thus, while important, protecting American democracy will not begin or end with the successful prosecution of Stewart Rhodes and his fellow Oath Keepers defendants. Broader strands of the patriot/militia movement remain a dangerous and highly motivated threat that demands a concerted, robust, and thoughtful government response. But in the aftermath of Jan. 6, Americans — and American officials — can no longer beg ignorance to this reality. This indictment alone will not fix the permissive environment that exists for extremists to prepare for violent solutions to political differences in America. Law enforcement, prosecutors, politicians and Americans writ large must acknowledge the insurrection for what it was and refuse to tolerate those who subvert democracy.

Sam Jackson is an assistant professor in the College of Emergency Preparedness, Homeland Security and Cybersecurity at the University at Albany. He is the author of “Oath Keepers: Patriotism and the Edge of Violence in a Right-wing Antigovernment Group.”

Matthew Kriner is a senior research scholar at the Center on Terrorism, Extremism, and Counterterrorism (CTEC) and the managing director of the Accelerationism Research Consortium (ARC). He specializes in accelerationism, U.S. domestic violent extremism, transnational far-right extremism, and radicalization.

Jon Lewis is a research fellow at the Program on Extremism, where he studies domestic and homegrown violent extremism, with a specialization in the evolution of white supremacist and anti-government movements in the United States and federal responses to the threat. He is also director of policy at the Accelerationism Research Consortium (ARC).