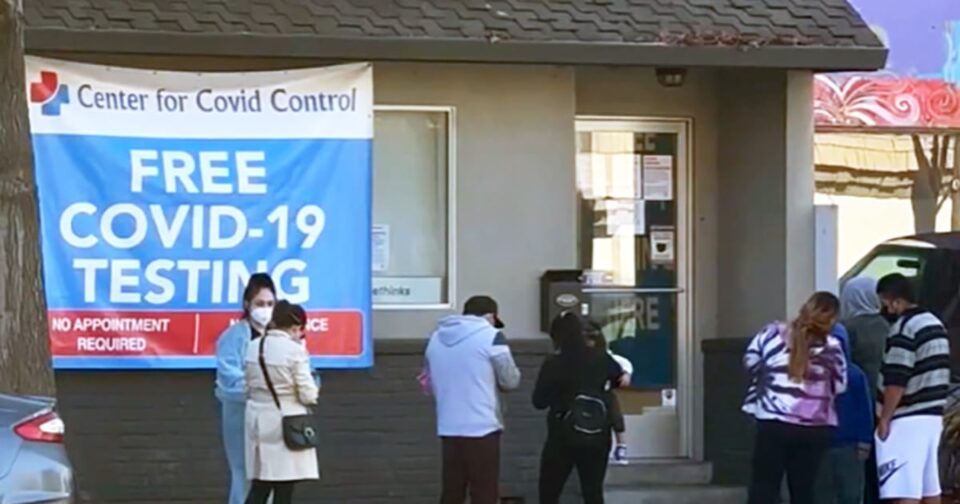 The Chicago-based company, Center for Covid Control, is already under investigation by multiple states and the federal Centers for Medicare and Medicaid Services, or CMS. The attorney general of Minnesota sued the company Wednesday alleging that it “either failed to deliver test results, or delivered test results that were falsified or inaccurate.”

Previous businesses of CEO Aleya Siyaj, 29, and her husband, Ali Syed, include an ax-throwing lounge and a donut shop.

The company, which has collected more than 400,000 samples nationwide, voluntarily shut down last week amid complaints about its business practices. A company spokesperson, however, said the company planned to start reopening its pop-up locations this weekend.

Federal inspectors visited Center for Covid Control pop-up sites in Illinois, Maryland and Wisconsin, as well as its associated lab in Illinois, Doctors Clinical Laboratory, according to an 81-page CMS inspection document that was first obtained by NBC Bay Area.

In late November, inspectors found that staff members at pop-up sites who conducted rapid Covid tests did not use timers to track when to review results. Inspectors also noted that on-site staff members “confirmed the laboratory did not follow the manufacturer’s package insert instructions.” Employee files for 214 of 242 testing locations showed that the company “failed to provide training and competency evaluation” to perform antigen tests, according to the inspection.

The inspection document also casts doubt on how the lab labels specimens. Inspectors noted that staff members failed to label specimens even though the instructions noted that technicians were supposed to take tubes and “write in permanent marker the date of birth, last name, and first name of the patient.” But inspectors noted that “51 out of 51 patient specimen tubes contained in the box [they examined] were blank.”

Inspectors also noted that the lab lacked appropriate freezers to store the specimens and that staff members failed to document complaints from customers who called demanding results.

Inspectors said that when they asked to see older lab records on Nov. 18, they were told that “due to an electrical surge all patient test and quality control data stored in the computers prior to Nov. 11, 2021 had been lost” and that there was “no backup procedure” to retain data.

A Center for Covid Control spokesperson said in an emailed statement that “CMS audited DCL’s lab and DCL has responded to any issues raised” and that the company had hired legal counsel in Chicago “to undertake a comprehensive, organization-wide review to ensure full compliance with clinical, operational, HIPAA guidelines and best practices, addressing CMS observations.”

HIPAA is the federal law that protects the privacy of people’s medical records and other health information.

The Minnesota lawsuit is the first filed by a state attorney general, but attorneys general in Illinois and Oregon are also investigating the company, and the attorney general of Massachusetts is reviewing complaints.

In a redacted complaint to the Illinois attorney general obtained by NBC News, a customer reported that a staffer said “they were not even sure that they’re actually processing or reporting the results of the PCR test or if they have a real lab that’s doing it.”

Another complainant told the Illinois attorney general’s office that they took a PCR test with Center for Covid Control on Dec. 21 and never got the results. The person said that when they called to complain, they were told that the “hold time would be close to 2 hours.”

A spokesperson for the Wisconsin Department of Health Services said in an email: “We are unable to comment on specific allegations, complaints or investigations. But I can tell you, DHS researches each inquiry or complaint regarding Covid-19 provider testing or billing practices that do not align with current policies.”

$120 million from the federal government

Records from the Department of Health and Human Services, the parent agency of CMS, show that to date Doctors Clinical Laboratory has billed the federal government at least $120 million.

Of the 48,000 medical providers who billed HHS for providing testing, treatment or vaccinations to uninsured people, Doctors Clinical Laboratory ranks 13th in the country.

A spokesperson said Wednesday that the company was taking steps to reopen each of its 300 pop-up sites, saying “a limited number of sites will open as announced on Saturday, Jan. 22, with a second group to open the following Monday or Tuesday, not completely determined which date yet.”

The spokesperson said that before the sites reopen, the company’s management will work on “required compliance issues including staff completion of training modules, certain equipment on site, any locally required business license in place … and healthy staffing/workforce availability, amongst others.”

A spokesperson for CMS said by email that the company’s decision to shut down last week was voluntary and not related to a CMS decision. “We continue to review our investigative findings to determine appropriate actions under our authorities,” the spokesperson said.

The spokesperson for the company said Center for Covid Control is a marketing company that runs pop-up sites and then sends most of the specimens it collects to the separately owned Doctors Clinical Laboratory, which conducts PCR testing.

The inspection also noted that the CEO told the inspectors that “the Center for Covid Control is the management company for Doctors Clinical Laboratory and that a copy of the business agreement would be provided.” But according to the inspection documents, a copy was never provided.

The Center for Covid Control spokesperson said that the two companies are “separate” and that “they have no cross ownership nor financial interests in the other” but that the management services agreement between them includes proprietary information and cannot be released.

The spokesperson confirmed that the two companies maintain offices at the same address but said employees are “clearly employed by one or the other entity; are paid separately; have clearly separate managers” and have “separate employment agreements.”

State business records for Doctors Clinical Laboratory list Mohammed Shujauddin as president of the company. The company’s voicemail was full, and emails to the company’s contact email were not replied to in time for this article. The laboratory’s registered address with the state is a UPS store in Chicago.

What chance does each remaining team have at winning the Super Bowl?