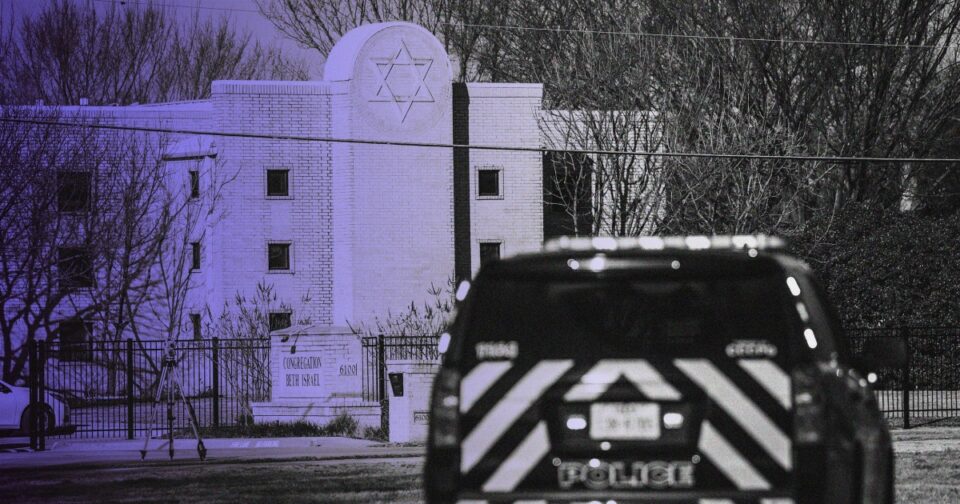 As a gunman took Jewish worshipers hostage at a Texas synagogue Saturday morning, I was over a thousand miles away, standing outside a different synagogue and serving as a volunteer security guard alongside an off-duty police officer. Across the country, the painful reality is that American Jews cannot gather to pray without taking safety precautions to protect against a rising pandemic of another kind: antisemitism.

Saturday’s attack is a reminder that antisemitism is that rare common thread that runs strong across the far-right, far-left and jihadi ideological spectrums.

Thanks to the security training the Texas rabbi and his congregants received because of the pervasiveness of these threats, the four hostages escaped unharmed from the standoff at Congregation Beth Israel in Colleyville. The only casualty was the assailant himself, British citizen Malik Faisal Akram, who was shot by the FBI’s hostage rescue team when it launched a raid after the captives escaped.

This hostage crisis came in the wake of a string of white supremacist and neo-Nazi attacks targeting Jews in Pittsburgh; Poway, California; and Kansas City, Kansas, to list a few. Not to mention there was the 2017 white supremacist march in Charlottesville, Virginia, where a participant killed someone by driving his car into the crowd and neo-Nazis chanted, “Jews will not replace us.”

While far-right groups are responsible for a great deal of the recent violence directed at Jews — and much of the media focus on antisemitic incidents in America — Saturday’s attack is a reminder that antisemitism is that rare common thread that runs strong across the far-right, far-left and jihadi ideological spectrums. The threat of jihadi extremism remains acute, even though domestic extremism has now emerged as an even bigger homeland terror threat.

I started my career as an FBI counterterrorism analyst and ended up leading one of the analytical teams at FBI headquarters in the wake of the 9/11 attacks. It was then, 20 years ago, that synagogues in America first started establishing security committees. At the time, the most pressing threat — to the Jewish community and America more broadly — emanated from transnational jihadi terrorism.

For whatever progress the U.S. has made in foiling jihadi terror atttacks — part of why the top law enforcement officials last year determined white supremacists presented the bigger threat — Akram demonstrated that the dangerous antisemitism that contributes to jihadism remains.

In 2020, Britain’s domestic intelligence service, MI5, listed Akram as a “subject of interest” but closed its investigation after concluding he posed no terrorist threat at the time. In December, Akram traveled to New York and then, a couple of weeks later, took four Jews hostage at a Texas synagogue.

Why did Akram target Congregation Beth Israel? It was not just because it was close to the federal facility holding Aafia Siddiqui, a Pakistani national serving an 86-year sentence for attempting to murder U.S. nationals whose release he demanded in return for freeing the hostages. For that he could have targeted any institution near the prison.

While Siddiqui, Akram’s cause célèbre, is in prison because she shot at a U.S. military officer and expressed a desire to kill Americans, she, too, is known for spouting antisemitic conspiracies. At her January 2010 trial, she famously called for subjecting the entire jury pool to genetic testing to exclude Jews. “If they have a Zionist or Israeli background … they are all mad at me,” Siddiqui said. “They should be excluded.” She later said her guilty verdict “is coming from Israel, not America.”

Akram is not the only one to champion Siddiqui’s cause: Al Qaeda, the Taliban and the Islamic State group have all sought her release, as has the government of Pakistan. But so have groups here in the United States, like the Council on American-Islamic Relations. CAIR’s Dallas-Fort Worth chapter described Siddiqui’s conviction as “one of the greatest examples of injustice in U.S. history.”

CAIR quickly denounced the Colleyville attack as antisemitic and “an unacceptable act of evil” this weekend. But CAIR officials themselves have promoted antisemitic tropes. In November, Zahra Billoo, the executive director of CAIR’s San Francisco chapter, gave a speech denouncing not only anti-Muslim bigotry and right-wing groups, but also “polite Zionists” — including mainstream Jewish organizations such as the Anti-Defamation League, which fights antisemitism, and Hillel, an organization for Jewish college students — as well as “Zionist synagogues.”

“When we talk about Islamophobia, we think oftentimes about the vehement fascists,” Billoo explained. “But I also want us to pay attention to the polite Zionists. The ones that say, ‘Let’s just break bread together.’” Accusing them of being part of an interconnected network of Zionist-supporting organizations trying to harm Muslims, she warned, “They are not your friends.”

(Billoo didn’t respond to requests for comment to media organizations when news of her remarks broke. Hower, in response to the leader of the ADL calling her comments antisemitic, the CAIR National Twitter account posted: “You use false claims of antisemitism to smear Muslims.”)

If CAIR doesn’t condemn such antisemitic tropes — these Jews can’t be trusted, they’re part of an organized Islamophia network, don’t break bread with polite Zionists — it is not truly opposing antisemitism and the root causes of what we see underpinning these acts of violence against Jews.

Indeed, the lesson from this latest assault must be that words matter and all antisemitic tropes — whether it’s “Jews will not replace us” or “Jews control the banks” or “don’t break bread with polite Zionists” — must not go unchecked.

The consequences of failing to do so can be devastating. In 2019, an astonishing 60 percent of all victims of anti-religious hate crimes were specifically targeted because of the offender’s anti-Jewish bias, according to the FBI. Compare that to 13.2 percent due to anti-Muslim bias and 3.8 percent due to anti-Catholic bias.

In 2019, an astonishing 60 percent of all victims of anti-religious hate crimes were specifically targeted because of the offender’s anti-Jewish bias, according to the FBI.

While a study by the University of Marlyand’s National Consortium for the Study of Terrorism and Responses to Terrorism showed that religion-based hate crimes in the United States tend to be less violent (many involve vandalism targeting houses of worship) than other types of hate crimes, Jewish targets were “greatly over-represented as victims of mass casualty attacks compared to other types of violent crime.” Antisemitic attackers only comprised 10.4 percent of offenders in the data set, but they accounted for 38.1 percent of those who planned or committed mass casualty attacks.

That is why I found myself standing guard outside a synagogue Saturday morning in the frigid cold and why synagogues across the country provide their congregants active shooter training. For Jews in America, being prepared to run, hide or fight — one key aspect of such trainings — is no academic exercise.

Jewish communities must continue to be supported with funds to protect their synagogues, and all houses of worship should prioritize getting the lifesaving training that spared the hostages at Beth Israel. Meanwhile, my neighbors and I will continue to stand guard.