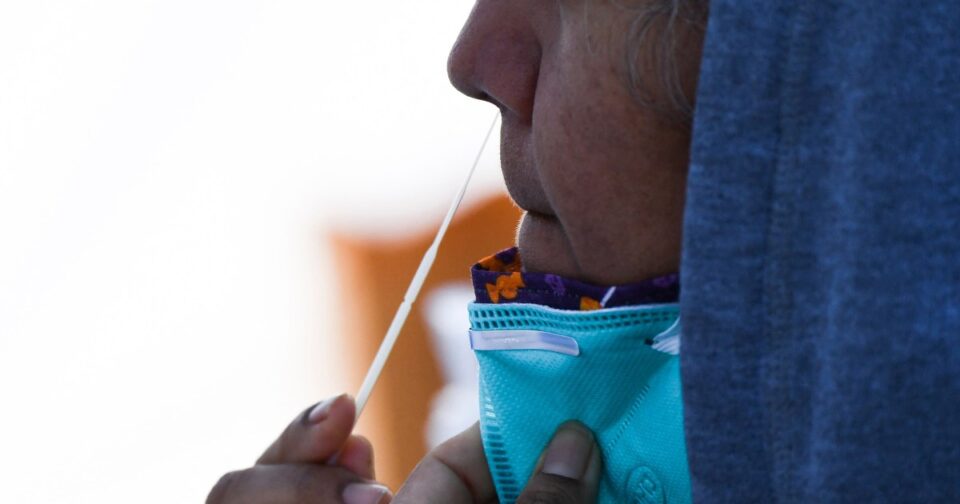 As the U.S. government officially launches a website to give away 500 million free, at-home rapid Covid test kits, the industry that makes the key tool for fighting the omicron surge is suffering from its own pandemic supply chain issues.

While the companies grapple with shortages of everything from test kit material to packaging supplies to trucks to deliver the boxes, executives at top rapid Covid test companies have tested positive for coronavirus themselves, along with hundreds of production employees who are out due to Covid infections.

“Every one of my executives has had it,” said Douglas Bryant, CEO of San Diego-based rapid test kit company Quidel. “Including yours truly.” Currently, 10 percent of his workforce who make the product is quarantined.

The company is currently making over 40 million tests each month and plans to increase to 70 million by February.

“Every one of my executives has had [Covid], including yours truly,” said the CEO of one test maker.

“The biggest challenge is actually enough people to do the work,” Bryant said. Despite increasing wages, the company has faced challenges meeting its goal of hiring 400 workers for a new production facility in Carlsbad, California, and finding enough trucks to make deliveries.

The supply the U.S. government has contracted for the free rollout is in addition to current supply and does not interfere with existing orders, a senior administration official told NBC News. Since September, four new rapid antigen tests with high-volume production capacity have been authorized, they noted.

On Jan. 13, the Department of Defense announced the awarding of contracts to three companies, Abbott, Roche Diagnostics, and iHealth labs, for 380 million test kits, in an “effort that supports the president’s plan to deliver 500 million free at-home COVID-19 tests,” according to a White House press release.

Abbott has “self-invested to build two new U.S. manufacturing facilities, hired thousands of people for new jobs that pay American wages, and we continue to invest in automation to allow us to scale further,” said Kim Modory, Abbott’s senior director of public affairs for diagnostics.

Abbott’s production lines are working around the clock, and the company is investing in automation. The firm is currently producing 70 million tests a month. It is building up the ability to manufacture an additional 30 million to be added to support government, school and more retail efforts, Modory said.

Roche spokeswoman Michelle Johnson said the company will start deliveries in January and by March provide “tens of millions” of test kits. The company has invested $500 million globally to boost instrument and test machine capacity. “Like other companies, we’ve experienced our share of supply challenges,” she said.

iHealth Labs did not respond to an NBC News request for comment.

The estimated total monthly capacity of U.S. rapid at-home test kit manufacturing is 260 million units per month, according to estimates by Mara Aspinall at Arizona State University. That is projected to rise to 355 million by February and 526 million by March.

Companies that win the government contracts need to respond to the same pressures and supply snarls faced by all test kit makers, and indeed all hands-on manufacturing companies during the pandemic. Chief among them, shortages of finished material and labor.

Demand for nitrocellulose membrane, the off-white fabric that forms the actual test strip, has skyrocketed during the pandemic.

Test kit manufacturers “are in the same situation as other businesses that require on-premises work (from education to laboratory diagnostics to garbage disposal to public transit to food supply and more): They have too many of their staff out with Covid. Thus, even if they have the physical capacity for production, they don’t have the staff,” Aspinall and her colleagues wrote in a newsletter.

Demand for high-quality nitrocellulose membrane, the off-white fabric that forms the actual lateral flow test strip, has skyrocketed during the pandemic for test kits and its use in other medical devices.

“We acted to alleviate” the bottleneck, the official said, and manufacturers report “no current inventory or consummable problems.”

In a statement, Rachel Bloom-Baglin, a spokesperson for MilliporeSigma, a subsidiary of Merck KGaA, Darmstadt, Germany, and supplier of nitrocellulose to major U.S. rapid test kit makers, told NBC News, “raw material availability to make nitrocellulose membrane is readily available, but the world does not have enough membrane manufacturing capacity to turn the raw materials into finished goods, which are then used by our customers to manufacture rapid antigen tests.”

The company currently makes the product at a facility in Cork, Ireland. Last year it completed an expansion, planned before the pandemic, that doubled its capacity — but even that proved insufficient to meet the soaring demand.

On Dec. 29, the Department of Defense awarded a $136.7 million to MilliporeSigma for the construction of a new facility in Sheboygan, Wisconsin, over a three-year timespan.

Nitrocellulose is “very, very critical for rapid diagnostic tests” said Estela Raychaudhuri, president of rapid kit maker InBios. “We are in active communication with [our supplier] to provide us more nitrocellulose membrane.”

“For now we’re okay. But we’re looking at the next six months where we won’t be okay if the surge continues,” she said. By February the company hopes to ramp production up to 40 million tests per month.

But before they get there, they need to get enough paper. “We have a test. But we can’t ship it if we don’t have the product insert and the instructions for use, as well as the box to put it in,” Raychaudhuri said.

Test makers still face the challenge of trying to forecast whether a massive capital investment will pay off in eight years — or even eight months.

She said she would like to add additional production shifts but has been finding it hard to find staff in the Seattle area where the company is based, despite offering “very competitive wages.”

Logistics companies are competing with Amazon for a tight supply of warehouse and distribution workers, and the online retailer is able to offer starting wages that exceed the market rate.

“It proves difficult to woo that workforce,” said Thomas Goldsby, a professor of logistics at the University of Tennessee.

Rapid test makers face the additional challenge of trying to forecast whether a massive capital investment for the capacity for sorely needed rapid tests will still pay off in eight years — or even eight months.

“Those who ‘figure this out’ appear to be the smartest kids in class, but it’s really a game of chance,” Goldsby said. “No one wants to be left holding massive inventories when the music stops.”

Though it was impossible to foresee the sudden and overwhelming demand for tests, health experts say there should have been more focus on ramping up test production capacity earlier on and not just vaccines, especially as experts warned that rapid testing capacity needed to be ramped up.

“I am really frustrated,” said Dr. Jennifer Nuzzo, a leading epidemiologist for Johns Hopkins University. “The fact that it was hard to get tests in the summer should have been enough to say: ‘Let’s hunker down so we can be sure we have enough tests at the holidays.’”

In March, one of her colleagues wrote a New York Times opinion piece noting that there were too few rapid antigen tests, and that they were too expensive — problems that have only got worse in the past 10 months.

“Everyone knew things would get worse in the winter. We didn’t know it would be omicron,” Nuzzo said.