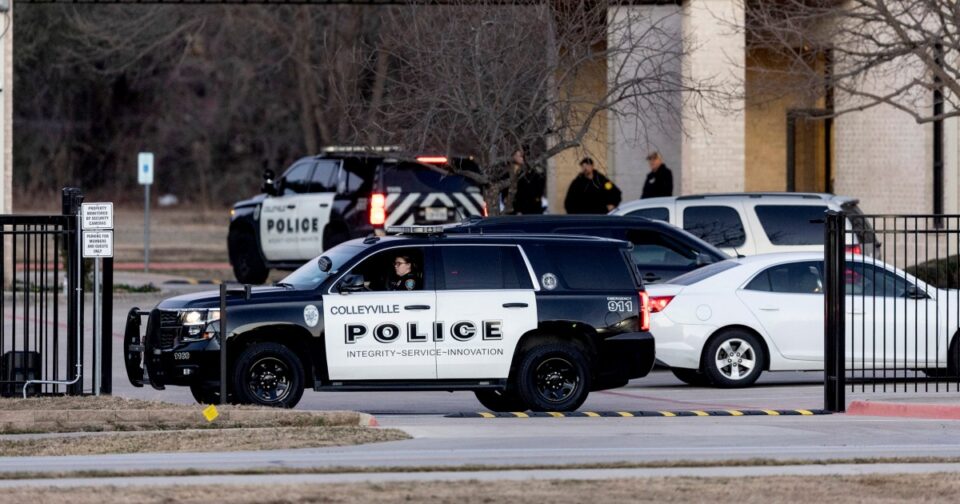 Counter-terrorism police in the U.K. arrested two men for questioning on Thursday as part of an ongoing investigation into a hostage-taking at a synagogue in Texas.

The arrests came almost a week after a British man held four people captive during an 11-hour ordeal at the synagogue in a Fort Worth suburb.

Greater Manchester Police said in a statement that the two men were arrested earlier that morning in Birmingham, around 120 miles northwest of London, and Manchester, around 86 miles further north.

The department said the two men remained in custody for questioning as of around 3 a.m. ET Thursday. They have not been charged.

“Officers from the Counter Terrorism Policing North West continue to support U.S. authorities with their investigation into the events in Texas,” the Greater Manchester Police said in a statement.

It is unclear how the two men could be connected to Saturday’s standoff between authorities and Malik Faisal Akram, 44, at Congregation Beth Israel, a Reform synagogue in the city of Colleyville. The incident culminated in the hostages escaping unharmed before Akram, who is from Lancashire in northwest England, was killed by federal agents.

The FBI has said that Akram is believed to have acted alone.

Siddiqui, 49, was convicted by a federal jury in 2010 of attempting to kill U.S. officers in Afghanistan and has been held at FMC Carswell, a federal prison in Fort Worth. Her sentencing was supplemented by a terror enhancement.

Akram had been known to U.K. intelligence, a British security source told NBC News. He was probed over potential terrorist links, but the case was closed by the time he traveled to the United States because it did not meet the threshold for further investigation, the source said.

On Sunday, British authorities detained two teenagers in connection with the incident, with a senior law enforcement official telling NBC News the teens were Akram’s sons. The teens had been taken in for questioning but were released without charge, British authorities said.

The official said Akram had been in touch with his sons at some point during the hostage situation on Saturday.

Police have not released the identities of the two teenagers who were detained.

The FBI has continued to investigate the incident as a “terrorism-related matter, in which the Jewish community was targeted.”