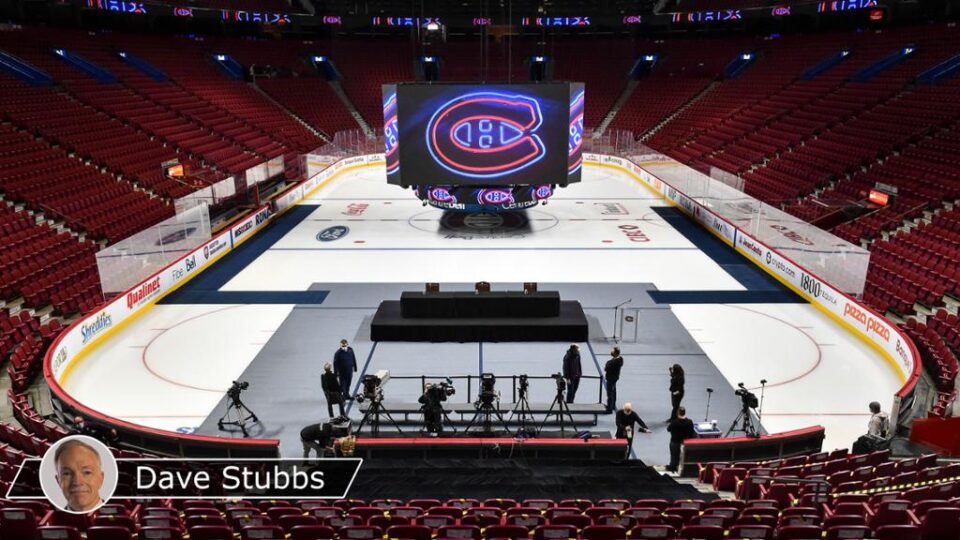 It was perhaps symbolic how and where Kent Hughes was introduced as the 18th general manager in Montreal Canadiens history.

For 50 minutes in Bell Centre on Wednesday, Hughes sat at a long table with Canadiens owner Geoff Molson on his left and executive vice president of hockey operations Jeff Gorton on his right. The table was situated on the ice, between the face-off circles of the end the Canadiens attack for two periods, more than 20,000 empty seats around it.

The rebuilding job faced by Hughes, a former player agent, and Gorton is as colossal as the empty building in which they sat, the news conference the first step in a mission that will be an unprecedented challenge for everyone in the oldest, most storied franchise in the NHL.

From the 2021 Stanley Cup Final to last place in the NHL this season, Montreal has had a plunge more dramatic than even the most pessimistic observer would have expected. Realities always colored the surprising run the Canadiens made last season, their first trip to the Stanley Cup Final since they won their 24th and most recent championship in 1993.

The Canadiens scraped into the postseason out of the all-Canada Scotia North Division, realigned because of the coronavirus pandemic. They rallied from 3-1 down to defeat the Toronto Maple Leafs in seven games in the Stanley Cup First Round, swept the Winnipeg Jets in the second round and got by the Vegas Golden Knights in a six-game semifinal before falling in a five-game Final to the Tampa Bay Lightning.

Back in the Atlantic Division this season, Montreal has nowhere to go but up, with monumental work to be done in every corner, on and off the ice. After a 4-3 overtime loss to the Golden Knights on Thursday, the Canadiens (8-25-6) are last in average goals per game (2.18), last in goal differential (minus-57) and tied with the Ottawa Senators for last in average goals-against (3.67). Their franchise goalie, Carey Price, has not played this season after having offseason knee surgery, and their captain, Shea Weber, is injured and unlikely to play again.

The pandemic has gutted the Canadiens, with more than 20 players at one point in NHL COVID-19 protocol. Injuries through the lineup have made that bad situation much worse.

“We’ve been able to see a lot of different players play for the Montreal Canadiens, more than you typically see on an NHL team,” Gorton said. “So that’s been good and bad. Good for evaluation.”

An exhaustive GM search whittled an interview list of 11 down to three before Hughes, a fluently bilingual native of Beaconsfield, Quebec, a suburb of Montreal, was hired.

The setting of his first news conference, carried live on French-language television and on radio in English and French, was a stark contrast to the one May 2, 2012, when Marc Bergevin was unveiled as the Canadiens’ 17th GM.

That event was held in a conference room of Montreal’s suburban practice facility. Hughes was backdropped by the Bell Centre scoreboard, lowered to center ice, expectations as expansive as the building in which he sat.

Upon his hiring 10 years ago, Bergevin often used the French word “ensemble” — together — to describe how he would manage the Canadiens, who had finished last in the Northeast Division and out of the playoffs in the 2011-12 season under coaches Jacques Martin, then midseason replacement Randy Cunneyworth, who would soon be replaced by Michel Therrien.

“I’m just a piece of the puzzle,” Bergevin said. “We’re all going to do this together.”

Bergevin, whose teams went 344-265-81 and advanced to the playoffs six times in his nine full seasons as GM, was fired Nov. 29, Gorton hired that same day.

Hughes and Gorton are part of a front office that faces another rebuild.

If it doesn’t begin with Price, a huge part of it is the goalie who hasn’t played since last season, first having knee surgery July 23, then entering the NHL/NHLPA player assistance program Oct. 7 for substance use. On Jan. 17, the Canadiens announced that Price is again beginning rehabilitation of his knee, with no timetable provided for his return.

Price has four seasons remaining on his contract. Whether the Canadiens could, or would wish to, trade the 34-year-old fan favorite is a huge question, one that sharply cuts to their ability to move freely within the NHL salary cap structure.

“What I’m hoping for is his health, that’s the most important thing,” Molson said Wednesday when asked if he hopes Price finishes his career with the Canadiens. “The player we saw in the playoffs was extraordinary. We hope he comes back healthy. That’s my priority because he’s one of the best goalies in the world.”

Weber, a leadership pillar, has not played this season, his career likely finished because of myriad injuries. The Canadiens have not replaced him as captain.

There are a few blocks Hughes said he will build around, two young forwards the only names he used Wednesday.

“We have young, exciting players, whether it be a [Nick] Suzuki or [Cole] Caulfield, and we have more established older veteran players,” he said. “We’re going spend a lot of time and probably speak ad nauseum about, ‘What do we do here?'”

Hughes and Gorton also will consider the future of coach Dominique Ducharme, who, under Bergevin, was signed to a three-year contract July 13, five months after replacing Claude Julien on Feb. 24.

“I certainly have beliefs about what a modern-day coach should be or have in terms of qualities,” Hughes said. “I’m anxious to speak to Dom and learn more about him. And ultimately, we’ll see where things take us from there.”

Admitting that the previous 48 hours had been a whirlwind, Hughes tried to look at the big picture. He saw a canvas as large as the arena in which he was sitting.

“What’s the vision, what are the first steps?” he said. “I can’t answer any of those questions without getting to know people, because to me, character and leadership are all critical pieces of a successful team and organization. I need to meet people and understand the dressing room.”

Saturday and Sunday Divisional Round Preview

MicroStrategy isn’t in the business of selling Bitcoin even if prices crash, says CEO Michael Saylor