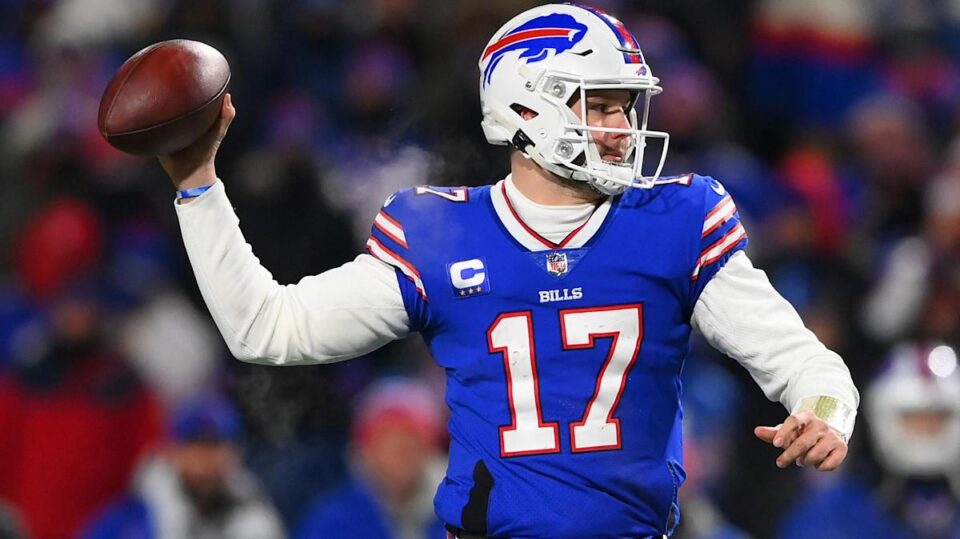 It’s getting real, folks. We’re facing down the divisional round of the playoffs and we have two days filled with excellent football. Whether you’re watching for the pure joy of football or are dabbling in some DFS to make it even more interesting, here is a preview of this weekend’s matchups.

*All rankings are based on regular-season fantasy scoring*

Bengals @ Titans – Saturday 4:30 pm ET — Titans -3.5, O/U 47.5
The Titans are a slight favorite in the Saturday afternoon game. There is one storyline that dominates the headlines.

After suffering a severe foot injury, Henry is poised to make his debut in the divisional round. I say “poised” because it’s still not official. He is technically still on injured reserve, but he has been seen at practice doing very Henry-like things. There is no question that he is the powerhouse of running backs in the NFL, but exactly how much work he will see (if he plays) remains to be seen. Don’t forget, both Dontrell Hilliard and D’Onta Foreman have been serviceable in King Henry’s absence. How much he is involved could depend on game script.

Over the last four weeks, the Bengals have allowed 468 rushing yards on 96 attempts for four touchdowns to running backs which ties the league at second-most. The Bengals’ defense-against passing is far more stout, ranked 13th against wide receivers during the same period and 18th against quarterbacks during the regular season.

The Titans’ defense will have their hands full with Joe Burrow and company who head into this road game with youth and momentum. The defense against the run has been third-best in the last four weeks of the regular season, but that’s not the strength of Cincinnati’s offense. In case you missed it, Burrow and rookie Ja’Marr Chase have been on fire and fellow WRs Tee Higgins and Tyler Boyd are weapons that the Titans will have to address.

Nashville has allowed the 12th-most yards to wide receivers and the seventh-most touchdowns to the position over the last two weeks. Burrow and his pass-catchers are lethal in the air. Even if the Titans can shut down Joe Mixon and the run game, the Titans have to keep Burrow off of the field. That means a strong run game to bleed time off of the clock to prevent the young quarterback from making big plays.

I’ll jet let that sit for a minute.

I have heard many discussions, arguments, and diatribes about how this is going to be the upset of the weekend. I will be honest. I don’t see it. A healthy Rodgers and Packers team in Green Bay, in frigid weather, versus a quarterback with a bum thumb and shoulder…

However, I have been in this industry long enough to know to never discount any given matchup. After all, these are human beings we are talking about.

The numbers are all well and good. I can give you points against, sacks, receptions, yards… you name it. On paper, this could be competitive. However, I don’t buy it. I will stand on this hill.

But, that doesn’t mean there aren’t fantasy points that can abound. If you’re going to pay up, go for Deebo Samuel. He is a beast of a human being with unlimited potential for receiving, rushing and even passing yards. If you like a stack, then look no further than Rodgers and Davante Adams. This will be the game where they pull out all of the stops.

Editor’s Note: The NFL playoffs are here & NBC Sports EDGE Plus is giving you a special offer. Get 15% off an EDGE Plus annual subscription throughout the playoffs when you use promo code PLAYOFF15. Get every tool for every game at one low price. It’s easier than ever to play & wager with confidence when you have NBC Sports EDGE Plus. Click here to learn more!

Rams @ Buccaneers – Sunday 3:00 pm ET — Buccaneers -3, O/U 48.5
This game is a conundrum. When it comes to explosive offensives, how can you get better than Tom Brady or Cooper Kupp? Or Cam Akers and Leonard Fournette? How about Rob Gronkowski and Odell Beckham, Jr.?

This game sounds like it should be defined by their offenses, and yet, their defenses are so invasive that I feel we have forgotten about their dominance. We are talking about top-five to top-ten defenses across the board by position. Yet, we have an over/under of 48.5.

This game will boil down to the injures on the Buccaneers’ offensive line. Brady must be protected to perform at his optimum capacity, which I believe he needs to have for this game. Aaron Donald and Von Miller must make Brady feel as uncomfortable as possible and disrupt the filaments of chemistry he has been forced to create. With Chris Godwin out with injury and Antonio Brown no longer a Buc, there is a very real opportunity for an upset if Matthew Stafford can keep his interceptions off the table.

Bills @ Chiefs – Sunday 6:30 pm ET — Chiefs -1.5, O/U 53.5
And we come to the culmination of the divisional round. Let’s be completely honest. This is a matchup of Josh Allen and Patrick Mahomes.

Mahomes hasn’t exactly been himself this season, but he has found his mojo in the last few weeks. Allen has had some ups and downs but has the tenacity of the Buffalo Mafia that is embodied in his legs. The real test for Allen was during the abysmal conditions last week when he annihilated Bill Belichick and the New England Patriots.

These are two young, elite quarterbacks facing off with quite the history behind the matchup.

The Chiefs defense has some issues, to say the least. Over the last two weeks, they are ranked last against quarterbacks, 16th against running backs, 31st against WRS, but have a healthy fourth-best against tight ends. They have also allowed two rushing touchdowns to quarterbacks in that time.

The Bills are fourth against quarterbacks, first against running backs, second against wide receivers, and fifth against tight ends.

On paper, it looks like the Bills should have this well in hand. However, this is the divisional round. It also has the highest over/under of any game this upcoming weekend. This will be a beast of a game in Kansas City as the Bills look for revenge.

A stack in either of these games is risky, but I don’t dislike Mahomes and Tyreek Hill or Mahomes and Travis Kelce. The Chiefs will do everything possible to shut down Stefon Diggs and Dawson Knox, so I would avoid a Bills stack.

Basically, what I am saying is to do your DFS on Saturday and just enjoy the knockdown drag-out fights of Sunday Football.